Ted was born July 12, 1933, in Philadelphia, Pennsylvania, to Alan William Sheppard and Gertrude Werntz. There, he attended Germantown Academy and excelled academically and athletically. He went on to attend Yale University on academic scholarship and graduated with honors in 1955.

Ted is preceded in his death by his parents and his wife, Mary. Ted married the love of his life, Mary Monaghan, on May 9, 1959. They raised four sons together, traveled all over the world together, and were married for 55 years.

Ted was a civil engineer by trade and considered by colleagues to be a pillar within the steel erection industry. He was a dear friend of the Iron Workers, Union Contractors, as well as the steel industry in general. He never officially retired and was working with Union Steel Erectors to get their AISC certification until just days before he passed. He used to joke that he would stop traveling for work when he couldn’t lift his suitcase onto the security table.

In his recent years, Ted moved back to Beaumont after 20+ years to be closer to his sons and grandchildren. He adored his family and was proud of each of them.

Those left to cherish his memory and continue his legacy include his four sons: Alan Jr. and his wife, Gina; Charles and his wife, Jay; Thomas; and Robert and his wife, Helen; his 3 granddaughters: Sammie Sheppard and her partner, Jason; Andie Chamberlain and her husband, Max; Maddie Sheppard; his 5 great-grandchildren: Herschel, Charlie, Ada, and Chamberlain twins (expected this Dec.), and numerous nieces, nephews, colleagues, and friends.

A Memorial Mass for Mr. Sheppard will be celebrated at 11:00 a.m., Saturday, September 24, 2022, at St. Anne Catholic Church, 2715 Calder Avenue, Beaumont. His cremation arrangements were handled through Broussard’s Crematorium, Beaumont, under the direction of Broussard’s, 1605 North Major Drive, Beaumont. 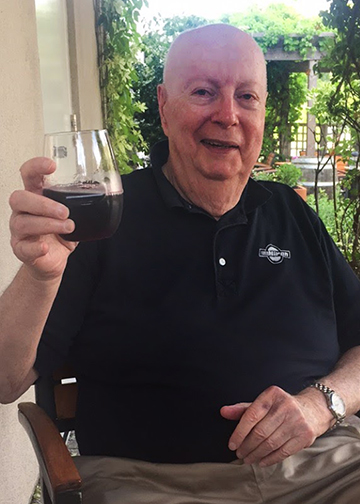 My heart goes out to the entire Sheppard family. You knew the man intimately while I knew him merely as boss, mentor, colleague and friend. Ted’s dry humor was legendary. Once when Mary commented at dinner that the restaurant server had no business in telling us her favorite wine Ted instantly responded that “The wine police will be here shortly”.
Ted was amazing and the team of Ted + Mary was pure warmth, truth and charm.

Ted was a blessing in my life. I always enjoyed our conversations about nonsense, the jokes we would share, the old work stories, all of that made working with Ted one of the best parts of my job. It was great over the years to have that work relationship grow into such a solid friendship.

I miss him already – my deepest condolences to the family

So sorry for your loss, Charles. May God provide peace and comfort for you and your family.

Everyone at Texas Oncology loved Mr Sheppard. He held an even special place in my heart. I will miss pu5 discussions about booms and current events. He always made me laugh and my day was always a little brighter when I saw him sitting in 5he waiting room. I will truly miss my “CIA” friend.