Andrew Fison, 55, of Lumberton, died, Friday, January 8, 2021, of complications from COVID-19. He was born in Epping, Essex, England but had lived in the United States for over twenty years.

He is preceded in death by his parents, Jonathan Fison and Ann Currington Fison.

Survivors include his partner of six years, Christy Hernandez; step-daughter, Katy Hernandez and step-son, Alex Hernandez; his sister, Moira Chambers and her partner, David Nicholls of Newark, Nottingham, England; his sister-in-love, Stephanie Powers and her husband, Ben Powers, of Groves, TX; his sister-in-love, Allison McGee and her husband, Joe McGee, of Richmond, TX; his mother-in-love, Cindy Colwell and father-in-love, Don Colwell, of Lumberton, TX; his nieces, Sophie Chambers, Rori Powers, Charli Powers and Reagan McGee; his nephews, Peter Chambers, Conor McGee and Ethan McGee; and his great-nephew, Jax Chambers.  The children loved when Uncle Andy came over to play.   Andrew also left so many friends in the community who are mourning his death.

Andrew was a local DJ who built a reputation as the epitome of the live music scene in Beaumont, TX. He was a booking manager and a prominent fixture in the hospitality industry who played a pivotal role in cultivating the heavy metal scene in Southeast, TX. Andrew was known for his outgoing personality, British charm and flamboyant style. He was also a big supporter of the LGBTQ community and worked closely with the local PRIDE and PFLAG groups. He had a love for animals and at one time had as many as eight rescue dogs.

Andrew was a big man with a bigger than life personality, and a huge heart.  He was the first to meet the neighbors, and first to offer help to anyone who needed it.  He never knew a stranger, had a loud, booming laugh, and would dress as a Superhero if the occasion allowed.  He loved his British and American families, and always let us know how much. No words were left unspoken.

A gathering of Andrew’s family and close friends was held on Tuesday, January 12, 2021, at Broussard’s, 2000 McFaddin Ave, Beaumont. Cremation was handled by Broussard’s Crematorium.  A Celebration of Life Memorial will be held at a later date, when COVID danger is decreased.  We invite all his friends to come at that time and help us celebrate with photographs, stories and toasts of his favorite drink, Kraken Black Spiced Rum. 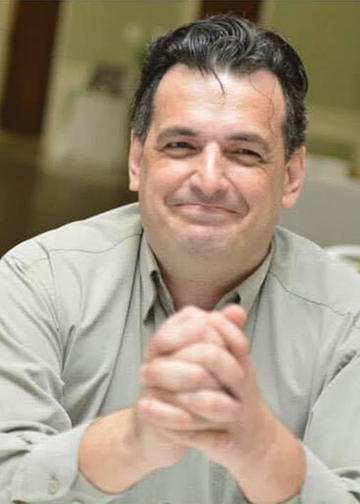 I was so sad to hear of Andrew's passing. You were a good friend to me & Art. Always helpful. You always did a great job spinning music & entertaining our guests at our events at The Neches Room. We had many fun times with many laughs. I loved hearing your stories in that wonderful English accent about England but especially the ones you told about Katy & ya'lls cooking, her school days & just the joy that she brought to your life. My prayers go out to Christy , Katy and all your loved ones and friends. You will be truly missed Andrew.

I will miss you, my dear friend.

Wonderful person great talent and will be missed by all. Hopefully a memorial will happen because we all loved him. RIP â˜®ï¸â£ï¸