Murray Anderson passed away June 25, 2022. He was a World War II veteran and had been a leader in Beaumont for many years.

Murray was born in Whitney, TX on June 23, 1924. He grew up on a farm with his 6 sisters. His father died when he was 17 and the family moved to town. Murray enlisted in the Marines in 1942 and served in the South Pacific theater during World War II. He participated in the battles of Tarawa, Saipan, Titian, and Okinawa which had a combined 210% battle casualty for his company. Murray wrote of his experiences in a book entitled “The Unrelenting Test of War”.  He wrote how his faith in God grew once he understood the power of praying for strength and courage.

After the war, Murray married his beloved wife, Virginia. Their marriage lasted 64 years, until her death.

Murray moved his family to Beaumont in 1958. He became a beloved and respected leader in the community through his career in the life insurance, estate planning and pension planning business. He was active in many organizations and, at one time, served as president of the Jaycees, Beaumont Exchange Club, Beaumont Life Underwriters Association, Sales Marketing Executives, and Beaumont Music Commission. He was well known for his honesty and integrity. Professionally he was recognized as a member of the Million Dollar Round Table, Texas Leaders Roundtable, Top 50 Salesmen, and Mutual of New York Hall of Fame.

Murray loved fishing, hunting, and working in his flower gardens. He loved his family most of all and we will all miss him. He always thanked God for his greatest blessing – his family.

A gathering for Mr. Anderson will begin at 10:00 a.m., with his memorial service at 11:00 a.m., Saturday, July 9, 2022, at St. Andrew’s Presbyterian Church, 1350 North 23rd Street, Beaumont, under the direction of Broussard’s, 1605 North Major Drive, Beaumont. His cremation arrangements were handled through Broussard’s Crematorium.

His arrangements will be livestreamed via the following link: https://saintandy.org/events-media/watch 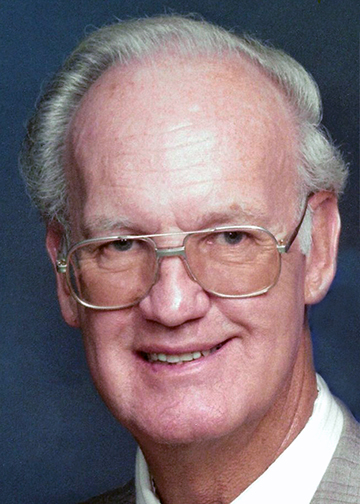 I have gotten to know Murray well over the last few years. Loved hearing his stories about his war experiences, his family life and his work experiences. When I walk into the sanctuary, I always look at the pew he always sat in. He was always concerned about Liz and I even as his health failed. I am sorry to lose him, but glad his suffering is over and he is back with Virginia. He told me many times that he was at peace and was ready to go.

“Well done, Good and Faithful Servant”
Murray and I served on many “problem solving” committees over the years at St. Andrews’ Presbyterian. Being the son of a Presbyterian minister, there was never any question of polity that he could not answer. He and Virginia were pillars in this congregation and it was my honor to call them “friends”.

Murray was the finest man I ever had the honor to call my friend. What a life, what an example -persevere to the end. Goodbye sir.

To my dear cousins,
I hope you know how much my family loved you dear father, Uncle Murray we always respectfully called him. He made a profound impression on my life by his deep spiritual life with Jesus Christ and his consummate professional businessman. He and his sweet Virginia were marvelous hosts whenever we visited them over the years. He demonstrated genuine caring first for his mother and later for his wife. He was particularly interested in my change of career direction into the ministry after several years in engineering sales. He was very supportive and encouraging. Murray surely made a profound impact in every endeavor leaving a brilliant influence as his remarkable legacy. We will miss him dearly.

Murray was a very fine gentleman. We have been friends’ for over 50 yrs. He will be missed. May His Soul Rest In Peace.

My very dear Uncle Murray…what a good life he led. He managed to live through the Pacific War, came back and fought health problems, married the love of his life forever, fathered 3 kids, took care of his mom, built a business, and was involved with his church. He truly made the world a better place. All my love and condolences to my cousins, and to all the parishioners who loved him.

Murray was a patriarch of our church. He was in church every Sunday until his health prevented his attendance. He was probably one of the most respected and loved men I’ve ever had the privilege of knowing. He will be missed terribly.

Murray and Virginia were both great people. I got to know Virginia when she taught a well attended Sunday School class on marriage. Murray was a good caregiver when she needed one. Murray was very smart and young for his age. He always had a beautiful yard especially his flowers. I bought his book and read it. It was very interesting. I always enjoyed his stories about World War II and how his spiritual life grew through it. Murray and Virginia are together again in Heaven. Prayers for your family.