Barbara Johanna Train Olson, 84, died on March 27, 2022, at Calder Woods in Beaumont, Texas.  She was born on December 28, 1937, in Lindsborg, Kansas, to Frans and Bernadine Train.  She spent her formative years in Kansas where her father was business owner and farmer. Her mother was a caregiver. Barbara earned a bachelor’s degree in Family and Child Development from Kansas State University. After graduation, Barbara wed Larry Olson and they moved to Port Arthur, Texas, where Larry began a 33-year career with Gulf Oil.

Barbara was a long-time resident of the Port Neches and Groves communities where her children were raised and active in school. She was involved in many organizations, including youth leader at St. John’s Lutheran Church. Later, she moved to Humble, Texas, and worked for Continental Airlines. Upon retiring, she moved to Beaumont where she did volunteer work and spent time with longtime friends and family, especially with her grandchildren. 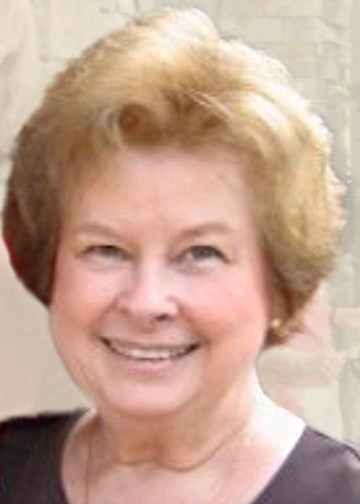 Barbara made baby wreaths for the gift shop at St. Elizabeth where I worked. She was one of the sweetest ladies I have ever met. Always a smile on her face. My deepest sympathy for her family.

Barbara was a wonderful volunteer at CHRISTUS St. Elizabeth Hospital when I was Director of Volunteer Services. Her perpetual smile and gentle manner were enjoyed by all of us and most especially her patients.

My childhood was enriched by being “raised” with Toni by Mrs Olson. I loved her so. She was always smiling with a little smirk. Always so complimentary and loving. We will all remember her “Barbisms”, correct grammar, and perfect enunciation. I will cherish my memories of her❤️❤️❤️

Barb always knew the best places to eat and what to see on your travels. Condolences to all her family.

Barbara was such a dear to me when I first transferred to IAH for Continental Airlines at the airport. She was such a dear and precious lady. So giving. My sincere condolences to all ….her sister Mary Train is also a dear friend. the whole Carino family sends our condolences.