Barrett Dane Harris, 45, of Crystal Beach, died Sunday, November 29, 2020. He was born on April 10, 1975. Barrett was adopted by Paul Harris and his wife, Leigh when he was six weeks old.  The family moved to Tennessee in May of 1975, where Paul had accepted a job as controller of a small college.  The adoption was finalized in Tennessee in December 1975.

He moved back to Wickenburg, Arizona with his mother in 1993.  Later that year, he moved to Fort Worth, Texas to live with his father, Paul.

A gathering of Mr. Harris’ family and friends will begin at 10:00 a.m., with his funeral service to follow at 12:00 p.m., Wednesday, December 9, 2020, at Malloy Funeral Home, 3028 Broadway, Galveston, with his interment to follow at Calvary Cemetery, Galveston. 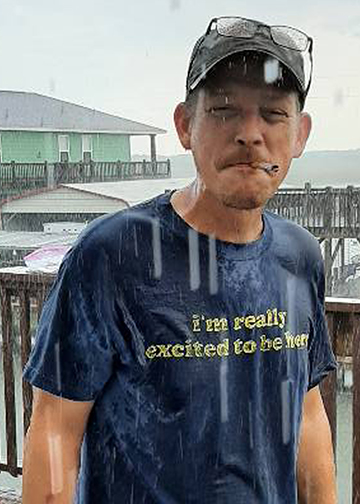 A Gathering Family and Friends

A Gathering Family and Friends

I send my condolences for his family and friends. I didn't know anyone that didn't love who we call Bear. I so happy we were able to enjoy Thanksgiving with him. Love and miss you.

Sure gonna miss you brother .when we first met at the bigstore we just clicked ..you called me sis and I called you brother ..I cant believe that your gone ..but I will cherish Your memories..one thing that's gonna be hard is if we have a hurricane and I'm gonna think about u calling me to call don to come take ya home in the big truck so u could get home ....gonna miss ya brother ..and it's so hard not to see ya at the bigstore. when I walk in the cooler I'm looking for you .I hear your voice hey sis or out side getting baskets to bring them in ..or waiting on us to close the store and you sitting waiting patiently til we finish so we wasnt waiting there alone..I'm gonna still expect you to walk in and say hey sis ...til we meet again brother I'm carring you with me in my heart .love you brother always ...love sis