Bryan Keith Sieben, age 58, went home with Lord Jesus at 3:26 p.m. on Wednesday, March 25, 2020. Bryan was born in Vandalia, Illinois, on January 6, 1962, to the parents of Merle and Martha Sieben. He was a 1980 graduate of Brown County High School in Mt. Sterling, Illinois, and he obtained his mechanic certification in Quincy, Illinois, in 1981. Bryan was an active member of Our Lady Victory Catholic Church in Sour Lake.

His father was the strongest influence in his life taught him about machines and equipment at a very early age. He gained a wealth of experience repairing farm equipment while growing up on the farm in Illinois. In February 1986, Bryan met Pamala Knight. They exchanged wedding vows on March 29, 1986, in Mineral Well, Texas. Bryan was known as a wizard mechanic, which led him and his wife Pamala to set up their own business in Kountze, Texas, in 1995 known as Sieben Equipment Service, Inc., with Pamala as the President and Bryan as the Chief Operating Officer. Bryan was a reputable businessman because of his knowledge and expertise in heavy equipment repair, and he earned the respect and admiration of many clients and employees over the years. His company was recently awarded the 2019 Sour Lake Chamber of Commerce Big Business of the Year. The American Cancer Society renamed their annual fundraiser at One in One Hundred Gun Club the Bryan Sieben Crush a Clay for Cancer. Bryan was a very strong influence in the lives of his sons Keith and Daren; they followed in their father’s footsteps by becoming heavy equipment mechanics in their father’s business. They both, along with friend and partner Jonathan Erickson, will carry on their parent’s business and legacy.

Bryan was known as a charitable person with his kindness and generosity in donating money to numerous organizations. Bryan was a loving husband, father, grandfather and he enjoyed being around his many friends. If you want to know more about Bryan growing up, ask his brothers Chatman and Clinton, and they have plenty of funny stories to tell.

He is preceded in death by his mother, Martha Sieben. He is survived by his wife, Pamala, of 34 years; son, Keith Sieben with wife, Meaghan, and granddaughters, Kaydence and Jemma; son, Daren Sieben with wife, Courtney, and grandson on the way; two brothers, Chatman with wife, Laura, and daughter, Josie, and Clinton with wife, Judy; his father, Merle Sieben; and close friends, Kerry and Belinda Trest, Judy Flowers, Jonathan Erickson, and Alex Lewis.

Bryan had the privilege and honor of being a role model, mentor, and surrogate father to Alicia Beale, Cody Laird, William Johnson, Rusty Dillard, Cooper Floyd, Jake Koehl, Eric Powell, Dustin Mason, and many others.

Friends and family are invited to the outdoor visitation beginning at 1:00 p.m., with his funeral service to follow at 2:00 p.m., Friday, March 27, 2020, at Bryan’s home, 10543 Bevil Boulevard, Kountze, with Reverend Ross Waggoner officiating. The burial service will immediately follow at the Pine Ridge Cemetery on Highway 421 in Sour Lake.

Please attend at your own discretion due to social distancing and your health. 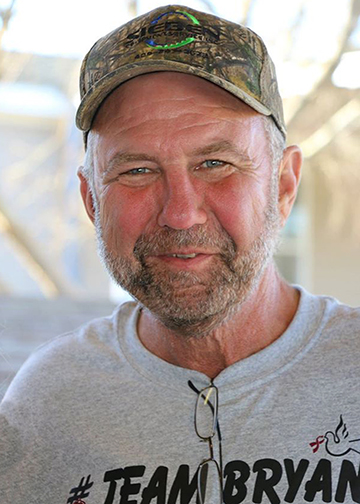 He was a great husband, dad If you new him you know he was a big teddy bear We will miss him so much my heart hurts so bad

So sorry to hear of your loss. He was such a nice man. May God bless you and your family.

Pamela sieben Prayers to you for peace and comfort I spent many a night with Bryan following him and his plot coon hounds.My deepest condolences for your loss to yours and Bryan's family I learned to love him back in the day he will be missed I promise he will never be forgotten not in my lifetime. I remember leaving Versailles Illinois each one of us had a beer in our hand and we went Airborne flying over the old railroad tracks inhis old green Dodge Power Wagon we laughed for hours If I remember correctly I believe Clint was in the back of the truck and Gary Smith was also with us.

Bryan will always be remembered as a great man, a loving husband, father and friend to so many. He will be dearly missed.

How do i remember this wonderful soul, we had so mad my good times, good memories, i had the privilege to attend to their wonderful wedding, how i wish i can go back on time and see you Bryan and my dear sister Pham, they were so lucky to find each other, for me they meant the world even though we went separate ways doesn't mean i stop loving you guys, RIP my dear friend i know you are sitting at the right hand of off father, till i see you again i will never forget you

I am saddened by this news. I taught Keith, Bryan's son, in first grade. I send my prayers for the entire family that you may remember him with a smile. He was a kind, caring man.

I meet Bryan 2 yrs ago I like Bryan he will b miss .I remember it was Christmas pam sister Jackie had ask me to go down there with her well they started opening gifts anj I was quite suprise I had never been around a family that had gave guns for presents I had a good time while I was there. My prayers goes out to palm an her family.

hi, i am woo from Sweden and i want to explain any thing about "pandemic". Please ask me :)

i am so satisfacted.my english is poor, sorry :). thx for approving my user greetings wally

hiiiiiii i am spider from Arg. I would to ask you what kind of games do you like playing?? My favourite games is diablo rpg