Carl was born in Kirbyville, Texas on March 27, 1925, to Douglas Ahart Stark and Viola Yielding Stark. In 1931, he moved with his family to San Augustine, Texas and attend schools there. In April 1943, he entered the United States Army and in early 1945 he was sent to the European Theater where he served in the 7th Army. In mid-1945 he was transferred to General Patton’s 3rd Army and was assigned to the 932-field artillery. When World War II ended, he served in the occupation forces in Europe and was stationed in Vienna, Austria. In April 1946, he returned to the States and was honorably discharge at Camp Chaffey, Ft. Smith, Arkansas.

Soon after his discharge he went to Beaumont, Texas where his older brother helped him get a job at Magnolia Petroleum Company, which became Mobil Oil Company. He was assigned to the maintenance department from 1946 until 1968. From 1961 till 1963 Mobil sent him to Mersin, Turkey to help set up the transportation department at a new refinery which was being built. He returned to the Beaumont refinery and in 1968 he was transferred to the engineering department Project Task Force. He worked as a practical engineer with the inspection group on all new construction projects. He retired from Mobil Oil on January 1, 1985 but returned on January 7, 1985 through contract to complete a wharf enlargement job which was begun earlier and finished in September 1985. 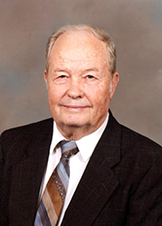 I always enjoyed my visits with Mr. Stark. He was a brilliant and very kind man. Much loved and respected by Flo. I was Flo's pastor a few years back.

He did not die. He is with us still in our hearts evidenced by all that we remember of his quiet and kind presence. No, he did not die He lives in every smile you may see along the way. Love RI ouldeg . Sorry I. cooud not be with you on this first day of your journey.

He did not die. He lives in the smiles and kindness that will linger forever in our hearts. I am sorry I could not be there for the first day of your journey.