Kit lived a full life. At the age of 6, his father’s job as a civil engineer took the family to Afghanistan. As there were no schools, he attended an English boarding school in Quetta, Pakistan, where he acquired a proper British accent. He spoke Urdu fluently and served as his parents’ interpreter. From there the family moved to (French) Morocco, Teheran, Iran, and Izmir, Turkey. At 14, he returned to the States to attend Riverside Military Academy in Gainesville, GA, and then went on to Auburn University, his father’s alma mater, receiving a bachelor’s degree in Aviation. At age 20 he enlisted in the United States Army, graduating from Officers Candidate School and Ranger School in 1967. He served as a 2nd Lieutenant in Viet Nam from 1968 to 1969 with the 25th Infantry Division. He received a Purple Heart and was honorably discharged in 1969.

He worked for WW Grainger for 19 years in Tulsa, OK, Houston, and Raleigh NC. He married Deborah (Debbie) July 2, 1992 (after a mutual 10-year test-run)! They moved back to Beaumont in 1994, where he worked for and retired from Coastal Welding Supply after 23 years.

He remained curious and informed throughout his life and had an eclectic, broad base of knowledge. He loved to read and watch old TV shows, and the Discovery and History channels. A master storyteller, he kept people in stiches with his irreverent, irrepressible humor. He loved to watch the Ragin’ Cajuns Softball team play, college sports, his job; but most of all, he loved his family. When Kit was not at work or play, you could find him in his garage, making furniture for his family and friends. He especially loved Christmas and all the trappings. His specialty was using found objects to disguise the real present hidden inside.

Kit was preceded in death by his parents, Bettie and Chris Brown and grandson, Cameron “Prince Harry” Kaminsky.

He will be sorely missed in this life and eagerly welcomed in the next.

Per Kit’s wishes, there will be no formal funeral, but rather a gathering of friends and family at Kit and Debbie’s home at 1180 Wooten Road, Beaumont, TX this coming Sunday, February 28, 2021 from 2:00 p.m. until 5:00 p.m. Bring stories and laughter! We will have lots of food and refreshments. 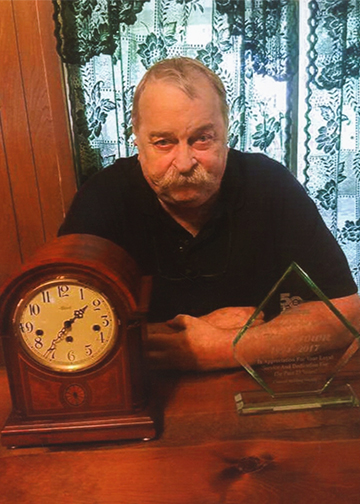 I worked with Mr Kit at Coastal back in 2006. He was such a sweet guy! I will always remember him telling me not to walk across to the store by myself and if I needed anything to let him know and he would go get it. He was a great guy. So sorry for your loss.

So sorry for your loss. Big Hug to all of you. RIP Kit.