Claud was a member of First Baptist Church of High Island where he served as a Deacon. Before retiring in 2008, he owned and operated Claud’s Inc., better known as, Claud’s Western Auto or Claud’s True Value, “a Beach Icon”, in Gilchrist for fifty-three years. It was a forced retirement because Hurricane Ike took the business away. Claud loved the interaction of all his customers and friends who would come and gather around the coffee bar and discuss the week’s happenings.   He sorely missed those conversations and camaraderie around the coffee bar.

Claud was a man of many talents. He worked many jobs in his younger years to make a living for his family, from nights working the Railroad Bridge, to driving the High Island School Bus, and he started a lawn mowing business out of a small building in our back yard. He had mowed lawns up and down the Bolivar Peninsula. In 1955, he opened Claud’s Outboard Service to the public selling Evinrude motors, boats, and trailers. He received Diamond Club awards over the years for his excellence in sales. He was well known throughout Galveston, Harris, Chambers and Jefferson Counties also bordering Louisiana.

Claud was also very active in our local community affairs. He served on the High Island School Board for eleven years. He also served with the Red Cross Knight Companion, San Felipe Conclave Constantine, and Appendant Orders for years. He was on the Board of Directors of Texas First Bank when they opened in Crystal Beach; President of Gilchrist Community Service; Managing Guide for Gulf Supply’s Duck Hunting Camp; a member of the Chamber of Commerce; and he served on the Bolivar Blueprint Steering Committee after Hurricane Ike. His business, Claud’s Inc., won the Award for Best Business.

Claud was raised a Master Mason in Anahuac Lodge #995 in Anahuac, Texas, on March 22, 1951.  On August 20, 1957, he was granted a demit to enable him to be a Charter member of Winnie-Stowell Lodge #1377.  He has outlived all the other charter members of our lodge.  Claud served that first year as our Junior Warden; then Senior Warden; and Worshipful Master in 1959-1960.  He served as Treasurer of the lodge for many years, as well as Chaplain.  Claud received his first-Class A Ritualistic Certificate in 1965 and his Life Certificate in 1991.  He was honored with the Golden Trowel Award, the highest award at the local level, from Winnie-Stowell Lodge in 1996 and was presented his fifty- and sixty-year awards from there as well.  Claud served his District 107 as District Instructor for many years as he helped all the lodges in our district with their ritualistic work.  Claud served his Grand Lodge also as District Deputy Grand Master in 1970 of District 107 and numerous Grand Lodge Committees.  He was appointed Grand Junior Steward of the Most Worshipful Grand Lodge of Texas in 2005 and Chairman of Petitions of Lodges UD in 2008.

He and the love of his life, Joy, served in the Order of the Eastern star, being initiated in Winnie-Stowell Chapter 1076 on November 4, 1962.  He served in many offices including five times as Worthy Patron with his wife and daughter, Donna, and others.  Winnie-Stowell Chapter consolidated with Anahuac Chapter #649 in 1993 and were presented their fifty-year membership certificates in 2012.  He and Joy served on many Grand Chapter committees also.

Claud joined the Beaumont York Rite Bodies in May 1960 which includes Beaumont Chapter #188, Beaumont Council #126, and Beaumont Commandery #38.  He was a thirty-two-year member of the Red Cross of Constantine and held offices in that branch of masonry.

Claud received his degrees in the Galveston Scottish Rite Bodies in 1986 and in 2003 he was invested by the Supreme Council of the Ancient and Accepted Scottish Rite as Knight Commander of the Court of Honor. In 2009, he was elevated to the Thirty-third Degree Inspector General Honorary.  He served in many offices of the Lodge of Perfection, Chapter Rose Croix, Council of Kadosh, and Consistory and was proud to be on the 16th and 24th degree teams.

As you can see, Claud Kahla was and is a brother whom all respected, truly a mason’s mason.

He was an avid hunter; an amazing muskrat trapper; outdoorsman; golfer; and was quite a bowler. We spent many years with family at deer leases during Thanksgiving and after Christmas!

He is preceded in death by his parents, Laura and Vernon Kahla; brothers, Earl Kahla and George Kahla; sister-in-law, Gwyn Kahla; and grandson, Douglas Wayne Sliger. 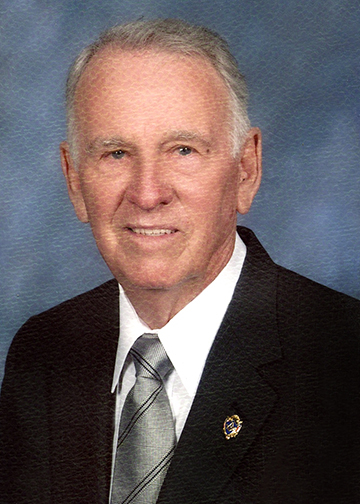 Joy, Laura, Donna, Debbie so sorry to hear about Cluade my thoughts and prayers are with you and yoiur familes. He will be greatly missed by all that knew him.

My grandparents were Claude and Hazel Revia of High Island. I was the little girl that was always with them, until James came along. And I remember being in the hardware store with my grandma and grandpa while they visited with Mr. Claud. He was always a very nice man and my grandpa always enjoyed his chats with him. Kristen, so sorry about the passing of your grandpa. God Bless you and your family during this difficult time. Fly High Mr. Claud. And say hello to my grandpa when you run into him up there. God Bless you all.

My deepest sympathy to the Kahla family. I met Claud at the hardware store in the late 80's.The coffee pot was a place I learned the history of High Island & Bolivar. Railroad tracks, saltdome and muskrat are something I don't believe I would have learned about anywhere else. I'm eternally grateful.Those were wonderful days before Ike took the store. Always there to help the community and to get others involved. He will be deeply missed.