Clement Douglas, “C.D.” Mohr passed away on April 18, 2022, at the age of 102.  He was born in Larchwood, Iowa on Thanksgiving Day, November 27, 1919.  He grew up with nine brothers and sisters in Howells, Nebraska, eventually attending St. Benedicts College, Atchison, Kansas on a music scholarship.  He served in the Pacific Theatre during World War II as a midshipman with the U.S. Navy, and graduated from the United States Merchant Marine Academy, Kingspoint, New York in February 1945.

After the war, C.D. spent several years at sea as a merchant sailing officer until coming ashore to wed Mary Joyce Bryant on July 29, 1950.  He pursued a career as a shipping agent and moved his growing family to several locations along the Gulf Coast until 1961, when they finally settled in Beaumont, Texas.

C.D. and Joyce proudly raised five children – a daughter and four sons – who all established homes in Texas.  Joyce went on to her heavenly home on April 7, 2017, having been married to C.D. for nearly 67 years.

After working a majority of his career in the steamship business, C.D. launched into a number of entrepreneurial ventures until finally retiring in 1987.  He moved to Calder Woods Retirement Community in July 2017,  and has lived in Beaumont for 61 years.  Being a man of boundless energy, he stayed busy writing his autobiography entitled: Facing Death Thirty Nine Times: The Life of Clement D. Mohr.

C.D. became a grandfather for the first time in 1978, and ultimately had nine grandchildren, and six great-grandchildren.  He treasured each one and proudly displayed their photos wherever he lived.

C.D. was preceded in death by his wife, Joyce, and his eldest son, William Douglas Mohr.

Flowers can be sent to Broussard’s or in lieu of flowers, memorial contributions can be made to his favorite charity, Smile Train, 633 Third Avenue, 9th Floor, New York, New York 10017, an international organization which repairs cleft lip and palates for children. 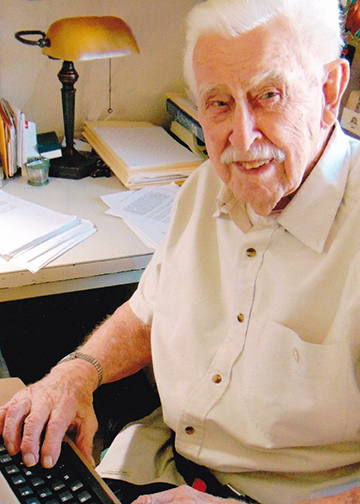 Stone and Nancy, I have no magic words to assuage the grief and sorrow you feel right now. Just know that as long as you remember him, CD will always be with you.

What an awesome video of both dedicated family man & friend since 1970. CDM will probably be playing piano or violin in heaven. I included his quote from last Christmas letter; “My hope is that you will live your life, love God, & love others……..make a difference for goodness, this world needs it”.
What a great ride over 100+ years! Peace.

Mr. Mohr was such a wonderful young man. Prayers for the family.

I always enjoyed visiting with you at Calder Woods