Graduating from Beaumont High School in 1943, he enlisted in the Army as most young men of the time, gaining a slot in the Army’s ASTP program and was sent to LSU for education and training with the intention of receiving a commission.  As WWII continued, the need for soldiers increased, the ASTP program was discontinued, and the men in the program were sent to bootcamp and combat training.   Col. Hawn (then Private Hawn) was assigned to the 99th Infantry Division and was sent to the Ardennes forest in Belgium. the intention being that this was a fairly, quiet area for new untested soldiers to be introduced into combat.  However, in mid-December, Hitler’s army launched a massive attack, now known as The Battle of the Bulge. His division was the first full division to cross into Germany at Remagen Bridge, the last remaining bridge crossing the Rhine. He always said that the first time he ever saw a jet aircraft, it was bombing the bridge as they ran across under machine gun fire.  The 99th division was also responsible for the liberation of a concentration satellite camp of Dachau located at Muhldorf in Bavaria.   His combat continued until approximately one month before VE day, when Col. Hawn was wounded in combat at the Ruhr Pocket.   Following his wounding, he remained in the hospital until July of 1945, when he was returned to duty.  After the war in the Pacific ended in August 1945, Col. Hawn left the Army and returned to civilian life.  Jobs were scarce following the war and unable to find a job, he returned to the Army, receiving a direct commission as a 2nd Lieutenant, and returning to Germany as a part of the Occupation Forces.

During his Army tenure, Col. Hawn was an instructor at both the War College and The Command and General Staff College.  Col. Hawn remained on active Reserve status until his retirement in 1985.

Following his return from Germany, Mr. Hawn returned to Beaumont and enrolled at Lamar State College of Technology, attaining a degree in Civil Engineering and becoming the first licensed civil engineer to graduate from that institution.  He went to work for the Texas Highway Department and remained with that organization until his retirement in the mid-1980s.  He was an integral part of the beginning Interstate Highway System, first surveying the entire I-10 corridor from Orange to Winnie, then designing Interstate 10 through Beaumont, the 11th Street overpass, Martin Luther King Parkway, and the Neches River Purple Heart Bridge.  He also designed the Major Drive expansion.

Following his retirement from the Highway Department, Mr. Hawn worked for FEMA.  He was sent to disaster areas all over the country, inspecting damage to roads and bridges.  His long career in designing and building made him ideal for this work.  He enjoyed the work until his declining health made it impossible to continue. 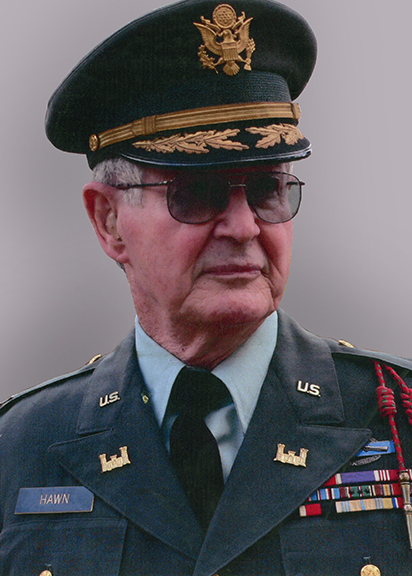 Col Hawn a very nice man. I loved talking with him, he went through a lot during WWII . He Will be missed. Rest easy Sir.

One of my favorite people from my first job 20 years. Every afternoon when I asked him how he was, he always said, â€œHell I donâ€™t know. Itâ€™s too early to tell.â€ He was a great guy and Iâ€™ll miss him.

Sheri, I am very sorry to hear about your dad. I will keep your family in my prayers.

Thank you for your service ,RIP sir> Vida prayers for you and your family.

Awesome tribute to a great man. Prayers for peace and comfort to your family. RIP Sir, and thank you for your service.

Love and miss you Col. Hawn. A True patriot and great man of his time. Will pray for him and his family. Thank you for all you did for my family over the years. God Bless!

Great man and father the time He and chris and I went to the Shoot Show In Dallas. Also the staying at there house for the first hurricane that I been through backing off into the ditch.