Cung Tran was born on October 28, 1976 in Bao Loc, Lam Dong, Vietnam. He was the fourth of eight children (5 girls and 3 boys). He emigrated to the United States with his parents and siblings in 1991 to Houston, TX . The family subsequently moved to Beaumont in 1992. After his father’s passing in 1998, Cung left high-school in order to support his family. His selfless sacrifice of his youth, and his outpouring of love allowed his four younger siblings the foundation to all obtain college degrees and develop their own successful careers. Cung shared how proud he was of his siblings during his final days.

Cung was a devoted husband and father. He married the love of his life, Phuong Duong, in 2007. Cung is survived by his two living sons, Justin (14) and Jordan (12). Cung and Phuong weathered the loss of their third son, Jacob, from a stillbirth in 2016.  Cung was embraced and loved by his in-laws as if he were their own son and brother.

Cung was a man known for his commitment and generosity. He worked at the same company for 22 years, and was an active parishioner at St. Joseph Catholic Church. He frequently volunteered his time to cook at fundraising events. He had many friends due to his easy-going personality, and was well liked by everyone. Whenever a helping hand was needed, he was often there to provide.

Cung was known for his stoicism, and displayed his affection to those around him through his actions. He enjoyed making jokes, working out, singing karaoke, and drinking with family and friends. He had the spirit to even take a final round of shots with everyone in his last hours. He valued hard work, putting in numerous hours into repairs around his home, of which his man-shed was his pride and joy. He could often be found there sipping coffee or beer during his down time.

Cung’s value of strength and resiliency meant he was a fighter. Diagnosed with pancreatic cancer in August of 2020, he continued to work full time despite receiving chemotherapy every two weeks. He never lost his sense of humor, bragging that all of the nurses were impressed with his enduring muscles and abs. His toughness even extended to his hair, which he pridefully displayed even through his treatments, so much so that he requested a final haircut after his passing. His drive to support his family and maintain his muscular physique held strong all the way up until his final weeks.

Cung will be missed dearly by all family and friends. We are blessed to have him in our lives for these past 46 precious years, and although we are sad he is no longer with us, there is relief in knowing that his suffering has come to an end. Cung will forever be in our thoughts and prayers.

We Love You.
Rest In Peace.

He is preceded in death by his father, Tich Tran and his son, Jacob Tran. 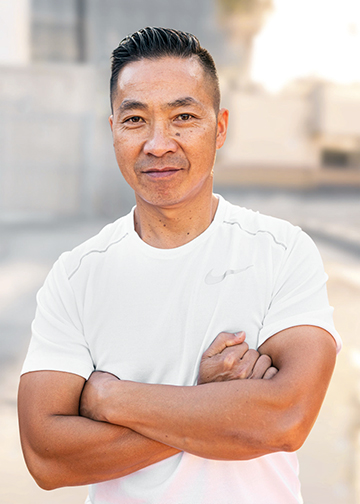 To Anthony & the Tran Family,
Very Sorry to hear about your loss.

Heartfelt condolences. He was my neighbor. An awesome man. He and my hubby always talked. Praying for his family 🙏🏾🙏🏾🙏🏾🙏🏾

Anthony,
Our deepest condolenses to you and your family.

Dear Tran Family,
My deepest condolences for your loss. May Cung’s soul rest in peace.
May the force be with all of you during this difficult time.

Sending my condolences and prayers for you all in this difficult time. His life story is very inspiring, may God rest his soul in peace and bestow strength to everyone to accept this irreparable loss.

Chị Phương and family, my sincere and deepest condolences. Although, I grew up with you guys for so many years Anh Cung has always been there for you guys no matter what. He became a brother instead of just an “in-law”. Y’all were so lucky to have such a sweet and generous person as a part of y’all’s family. I will continue to pray for the each and every one of you. Rest in peace Anh Cung.