The family and friends of Dan William Rogas, Jr., mourn the passing of their brightest star from natural causes on his wildlife habitat in Lumberton, Texas, Tuesday, February 1, 2022. Born in Beaumont, Texas in January 1956 to Betty Jean Wilder and Lamar University Coach Dan Rogas. He grew up with a group of boys that have been his life-long friends from Averill Elementary to Beaumont High School where he graduated with honors, excelled in athletics and was elected Captain of the football team, Student Body President and Mr. Beaumont High School. Raised by parents who were devoted to their 3 children, shaping and guiding them with a strict moral code which never left him, Danny always took the high ground and did the right thing. He had the golden gift of friendship in his bones, he never met a stranger and many were brought into his fold. He went on to play football for Lamar University ever expanding his life-long friend group. His degree in Marketing took him to Houston with Xerox where he led his new teams to outstanding goals and President’s Club every year. In 1984, he married the love of his life, Tammy Franks and together they made a home for their two daughters that was a joyful haven and shelter from the storms of life for all who knew them, human and animal alike.  One to always celebrate life, Dan’s dinner parties were legendary, his Christmas hayrides for all the kids through River Oaks to see the holiday lights, his Boxing Day party not to be missed, and all knew they had a seat at the Rogases’ table come any other holiday they were adrift or in need of cheer. Their door was open to one and all as they nurtured everyone they knew.

As a businessman, Dan ended up with his own consulting firm and used his career to better the world for all, both professionally and personally. Dan was a devout, life-long Episcopalian who served in a multitude of capacities from acolyte to usher to Senior Warden through the years. Always active and trying to make a difference, he served on the board of The Chaplaincy Fund for M.D. Anderson, as President of Gulf Coast Conservation Association, as a leader of the Way Station team that fed the homeless population of Houston daily at Palmer Memorial Episcopal Church, on the Board of The Briar Club, as a member of The Houston Breakfast Club that met at the River Oaks Country Club, as part of the Dad’s Club at Episcopal High School. Dan was always giving back to his community and his church. He truly was a champion of Life.

He was always happiest when outdoors with family and friends, whether he was developing his natural wildlife habitat or on his bi-annual hunting and fishing trips with his brother, nephew and close group of friends who just celebrated their 40th year to hunt together. Always the athlete he loved tennis, skeet shooting, sailing, working out and being his daughters #1 fan when they were playing field hockey from middle school through high school.

Danny is survived by his beloved wife of 38 years, Tammy; his daughters Jordan Rogas of Houston, Madison and her husband Steven Keller of San Francisco; his god-daughters Parker Goings and Wendy Hopper Jarvie; his mother, Betty Jean; his sister Gale and her husband Ron Doty; his brother David; his niece Melissa and her husband Harrison Luke; his nephew Trey Terracina; and a multitude of friends who are truly like family that are too many to list here. And as Dan was always known to say after whipping on his sunglasses, ” Roads? Where we’re going, we don’t need roads!”.  We will give you a head start this time, Dano! See you on the other side. 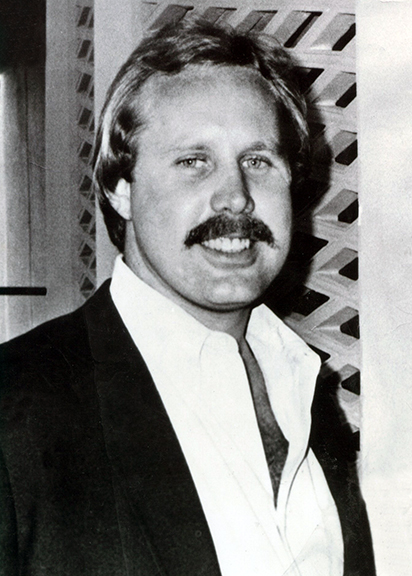 David, I am sorry about the death of your brother. You talked about him when we were kids over 40 years ago. God bless you and your family.

So sorry to hear this news about Danny.
Gale, and Mrs. BJ, our sincere sympathy.

My thoughts and prayers are with all the Rogas Famiy ..so very sorry for your loss…Deepest sympathy & love, Judy Dishman

To Mrs. Rogas and Gale (sorry I don’t know the other members of Dan’s immediate and extended family):
I am sorry for your loss. May you find comfort in knowing that you will see Dan in another time, but in a better place. I will end this note with a quote from Romeo and Juliet:
“When he shall die, cut him into little stars, and he shall make the face of heaven so fond, that all the world will fall in love with night and pay no worship to the garish sun.”
Mario Duhon (Gale’s high school classmate)

Mario
That is so fitting and beautiful. Thank for your kind words.

Tammy,
Though I sent a message last week, having attending yesterday’s service, I would be remiss not to mention Dan’s Love for you, which was such a Gift to witness with Great admiration amongst family and friends.

Dan’s commitment as a husband was about walking in faith, caring and honoring you, while loving and accepting you unconditionally. His love for you mirrored the love that Christ has for the Church, in a way that was selfless and sacrificial.

Thank you so much, John. We all have fond memories of the years our families spent together as our kids were growing up.

To B.J. and family,
Love and prayers. Thinking of you!

Life is too short for the fine people in life that your meet and this is best exemplified by an individual like Dan. We have a lot of good memories of times spent with Dan and Tammy and unfortunately regrets now that we didn’t do more, but that seems to be the way it always turns out. He will be missed and our prayers will certainly include his family and the loss that they have experienced, but no words can make up for not having him here.

That is so sweet of you to say. Thank you for the kind words. Xox
Tammy

Our family shared many years of friendship with the Rogas family. I have fond memories of Friday nights spent at Royal Purple Stadium and Saturdays at Cardinal Stadium because “we’re going to watch Danny Rogas play football”….he was larger than life!

Many, many people share in your sorrow. My deepest condolences.

Thank you. What wonderful memories! I felt the same way watching him play for Lamar.

My deepest sympathy to all of the Rogas family. God bless everyone in your time of loss and grief.

It’s so sad to think that Danny’s family will have to carry on without him . . . You all gave him so much to be proud of! I think it’s safe to say that many of us who were growing up in Beaumont looked up to Danny. What a great example of a life well-lived!

I am so sorry about Dan’s death. I am praying for you Tammy. You two were such a picture of love and commitment. God bless you and the girls.
Meg

Tammy,
It is with a heavy heart that I send this note. Dan embodied so many wonderful qualities of a husband, a dad, a friend, and most importantly, a man of God.

Dan was a class act who always treated people with dignity and respect, regardless of their walk-in life. It is simply through the constructive manner in which he lived his life that he had the greatest impact upon others. Dan took the time to notice the little things that made life special, and in doing so, made others’ feel special as well.

He was a listener, a giver, a responder, a silent doer – a friend.

To Jordan and Maddie: Whenever you have a problem, ask yourself, “What would Dad want me to do?” You will always make the right decision.

In death we learn so much about life. Heaven has just been richly blessed by Dan’s presence.

“Do not let your hearts be troubled. Trust in God, trust also in me. In my Father’s house there are many rooms; if it were not so, I would have told you. And if I go and prepare a place for you, I will come back and take you to be with me that you also may be where I am. You know the way to the place where I am going.” John 4:1-4

Danny and I became instant friends along with siblings, Gale and David. The Rogas family and Ford family spent many warm, wonderful days at the beach. My mom, Pat Ford and Danny’s mom BJ were life long BFF. Danny was a loyal friend and was attentive to his family and my family. I will miss him and hold a special place In my heart for Danny and all his family. Peace Be With You

Such wonderful memories, Catherine. They are sustaining us. Xox
kind regards,
Tammy.

I was so saddened to hear of Danny’s passing. It is an unavoidable response when you know there will be no opportunity in this lifetime to see a fondly remembered friend from years past. I am like others who went to school with Danny from Averill through Beaumont High and witnessed the kind, intelligent, principled boy grow into a young man. Although many achievements followed, an early accolade was the William Danforth “I Dare You” award at the end of 8th grade for exemplifying qualities of leadership and challenging the recipient to aspire nobly, adventure daringly, and serve humbly. I wanted to share that early on it was clear that Danny would continue to live a life of integrity and accomplishment that blessed the people around him. To his loved ones, our heartfelt sympathies for your loss. To Danny, God’s speed to the best of the best.

Danny was a Great Leader and Role Model for Good! Thanks for all you did for us Royal Purple’s!

I first met Dan when I transferred to Xerox Houston. At that time the Xerox office was in turmoil; Dan’s calming demeanor in welcoming me was much appreciated.
Our relationship was enhanced by a mutual appreciation for the outdoors; hunting and fishing trips brought the best in Dan’s personality- which I will always remember.
Rest in peace my friend; we’ll all see you soon.
Mike Green
Austin

We have lost a shining star — Heaven has gained a revered angel. I grieve with you and for you all. May God be with you all and bring you peace and comfort and understanding. My heart and much love go out to each and everyone of you

I was very sad to hear about Danny’s passing. We met at Palmer Church and became reacquainted at St. Mark’s a few years ago. His family will be in our prayers.

Thank you, Mark. I, too remember our happier days at Palmer Episcopal.

Dan was a great friend and a better person. I can only remember good times and always great advice. God bless his family.

I met Danny in middle school, and we attended high school together. Danny was special and I will remember those times we shared.
Until we see each other again.

To all of Dan’s family:
As God is the sustainer of the bereaved, I pray He gives you comfort for your grief, protection for your family and wisdom in decisions. May your family find solace knowing that your Dan is walking with the Lord in joy, in the company of family and friends.

Dear Phelan family,
We are trying to find joy in that knowledge but our hearts on earth are broken. I am truly humbled, I have never known such pain.

Kind regards,
Tammy and the girls