Born in Brooklyn, New York, on June 24, 1953, Marc was the son of Melvin and Elaine Levy.  Marc was a graduate of Brentwood High School in Brentwood, New York.  Following in the footsteps of his father, Marc was determined to serve his fellow citizens as a police officer.  Although he was bound by birth to New York, Marc moved to Texas as fast as he could in 1979 and joined the Beaumont Police Department.

Law enforcement never had a better friend than Marc Levy.  Sergeant Levy proudly served with the Beaumont Police Department from 1979 until his retirement in 2015.  He served in the Honor Guard for three years.

Marc is survived by his loving wife, Emma Nell Levy of Mauriceville; his parents Mel and Elaine Levy; his sons, Matthew Levy and wife, Amy of Port Jefferson Station, New York, Alan Levy and wife, Danielle, of Montgomery, Texas, Jeffery Levy and wife, Kaylynn, of Chesapeake, Virginia, and Brandon Coleman and fiancé, Kassidy, of Vidor, Texas; and daughters Wendi Everingham and husband, Chad, of Diana, Texas and Kelli Holland and husband, James, of Buna, Texas; his siblings, Robyn Signorelli of Massapequa, New York and Gwen Levy of Middle Island, New York; his nephew Justin Signorelli and Jordan Signorelli; his niece Rachel Signorelli; and his 16 grandchildren and 2 great-grandchildren.  Although he had many, many friends, he will be missed dearly by his close friend and mentor, Charles Cole.

Marc lived life to the fullest.  He enjoyed camping in the RV and spending summertime in Galveston.  He was a hard-working retiree, and he couldn’t wait to start the next project.  He was a helper and would not hesitate to lend a hand if you needed it.     Marc loved his colleagues on the force, his many friends he met outside of work, the public service he performed, his farm equipment, the man cave, and all of his gadgets (especially anything by Apple).  He loved raising chickens and turkeys and telling jokes.

Marc loved his family most of all, and they all knew it.  His family was the center of his life.  The kids called him PopPop and he shamelessly spoiled them. He never missed a chance to fly to New York to visit his family there.  He called his kids and grandkids nearly every day just to see how they were doing and if they needed anything from him.  He was always happy to see you, and he greeted you with a warm smile that confirmed how much he loved you and was thankful that you were a part of his life.

A family committal will be held at Restlawn Memorial Park, Vidor, with a memorial service held at a later date. 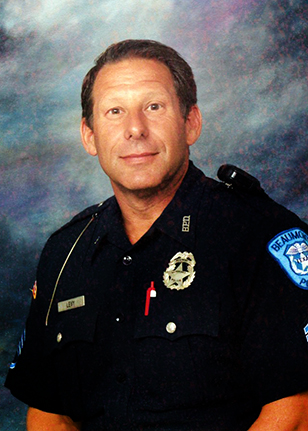 a great man, a great police officer,and an aswum husband and dad. Marc knew no limitations and was always good to go anytime,anywhere,any place ! Salute Bruther !!!!

Marc was always so proud of his sons and it showed. I was always impressed when they were little boys of how well mannered they were. His love for his entire family was most evident. I am deeply sorry for your loss. Cherish your memories...May he rest in eternal peace.

I worked with Sgt. Levy and he was a very nice man. Fly hope Sir.

Rest in peace brother. It was an honor working with you.......BPD

Marc was a Good Friend, and Better Sgt. When I would have him come to my scene to ask him a question. Instead of giving me the answer he would ask "Well Downtown what do you think you should do? I would tell him and he always said"If that's what you want to do then do it". They way he always talked about his family it was obvious he loved them dearly. Sarg. ; You are already being missed.

I am so sorry to see my friend go so soon and so unexpectedly. My family and I offer our most heartfelt condolences to Nell and all of Marc's family. Some people go through life without being noticed or remembered, but Marc is definitely not one of those people. His upfront way and wit will be long remembered by many. Those he taught, learned a lot and were lucky to have him as a mentor. For me, I will remember him simply as my friend, and I will miss him.

Marc and I worked together for the five years of my career. We were both day shift sergeants and handled morning shift as well as hurricane response together. Marc was a true partner, loyal, dedicated and always putting the men and women whom he supervised first in his concerns. He was a devoted and proud father of his three boys. He never missed an opportunity to brag on each of them and their accomplishments. His love of his life, Nell was his queen. It was truly an honor to have served with him, and I will truly miss his friendship and wit. He will truly be missed.

To Nell, the boys, Mr. and Mrs. Levy and all of his family: Remember the good times. I know there were many. I think thatâ€™s what he would want. Weâ€™ll all miss him a lot.

He will be missed by all Family and Friends.

So sorry to hear about â€˜Levyâ€™. Mike always called Marc by his last name! Good memories of the two of them joking back and forth with each other. Prayers for family and friends. Renee Lane

My deepest sympathys to Marc's family. He was an awesome man and will be missed greatly by the community. RIP.

At the police department, Marc never passed a pot that he was not going to stir. I spent many an hour with Marc listening to his stories of "poking the Bear," who was his nemesis and friend, Major John Parsons. Marc was a great guy, great cop and a super family man. He is very much missed.

The best advise i ever received from Marc was, â€œdo the right thing at the right time for the right reasonâ€. Wish I would have applied it sooner. He was a great guy and will be missed.

Rest In Peace Sir. Thank you for your service. On behalf of the Gernale Family, our condolences.

Beatrice died at age 24 in 1290 with out Dante ever seeing her once more.