Doris Virginia Devore, of Nederland, Texas, passed away on Friday, November 6th surrounded by family at 9:00 p.m. Doris had turned 90 years old this last August and had just celebrated her sixty-eighth wedding anniversary in October with her husband Hugh Devore.

Doris was born on August 20, 1930, in Carthage, Texas to Reedie and Lucille Colemon. She was one of seven children and the oldest girl in the family. Everyone referred to her as “Sister”. She has been preceded in death by her brothers, Buddy, Robert, Gene and Jimmy Colemon as well as her parents. Both of her sisters, Mary Sue Kyle and Betty Baitland are still living.

After graduating high school, Doris went to live in Corpus Christi where she met Hugh Devore who was in the United States Navy. They began their dating lives together in the same way they have lived all of their lives by going to church. Their dates consisted of finding different church meeting to attend. They were married on October 25, 1952, in Carthage, Texas.

When Hugh was discharged from the Navy, they moved to Nederland, TX where they settled down and purchased their home. Hugh was employed at Gulf Oil, and Doris started working at General Electric in Beaumont. She worked there for about three years before starting a family of her own. Doris stayed home and raised her daughters, Angie and Deena. Once the girls were in school, Doris went to work for Langham Elementary where she worked for several years as an aide and then later became the school secretary. She worked a total of twenty-one years for the school.

Doris was a wonderful, loving mother. She sewed most of the clothes for the girls and was an excellent cook and baker. Doris provided a great example of how to be a Christian wife and mother. Growing up the whole family spent many hours together, cooking playing games, talking and going to church. Every Christmas the family would get together to make Christmas candy. When everything was finished, the table had to be extended as long as possible and would be covered from end to end with Divinity, Pralines, Fudge, and Martha Washington candy that would be taken and given to different offices where people worked. This tradition continued through last Christmas.

Hugh and Doris were active members at Hillcrest Baptist Church. They joined the church in July of 1956 after moving to town. Throughout their time in the church, they have always helped with meals. Since their retirement, they have been on the benevolence committee at church, and anytime there was a meal being prepared for another family they would always call upon Doris to make pies. She would always bring a homemade chocolate and coconut pie. She quickly became known as the “Pie Lady” because over the years she has made more than one thousand pies.

Doris and Hugh were extremely happy to welcome their sons-in-law into the family. Angie married Tom Andrews in August of 1981, and Deena married Paul Stiles in November of 1987. Both girls now reside in Nederland. Angie and Tom had one son, Stephen Andrews. Deena and Paul had three sons, Douglas, Robert, and Christopher Stiles.

Doris and Hugh loved spending time with their grandchildren. They attended every school event possible while the grandkids were in Nederland schools. They also sat through many hot and/or cold soccer, basketball and baseball games for their grandsons, Stephen, Robert and Douglas. In addition, they attended every trumpet concert possible to support their grandson, Christopher. Doris was a wonderful grandmother to all the boys. She would do anything that she could to help and support then and make them happy. This included making homemade biscuits if they came over and asked for them or making a special desert for their birthdays. She was always thinking about what she could do for someone else.

When Stephen and his wife, Hannah, gave her great grandchildren, Doris had even more people in her life that she could love and spoil. Doris was blessed to have seven great-grandchildren, Nathan, Jacob, Anne, Peter, Joel, Ruth, and Seth Andrews.

Doris and Hugh have spent the last sixty-eight years together always doing everything side by side. They have worked together to complete every project whether it was cooking, cleaning or doing something for someone else. It was rare to see one of them without the other. Their marriage was one that was truly built on love and faith and was an example for everyone that knew them.

Doris is going to be missed by everyone that has ever known her because in her own quiet way she always touched everyone’s lives and changed it for the better. Doris is in a better place now and it is up to the rest of us to try to walk in her footsteps and try to serve the Lord in the way that she did every day.

“O death, where is your victory? O death where is your sting?” For sin is the sting that results in death, and the law gives sin its power. But thank God! He gives us victory over sin and death through our Lord Jesus Christ. 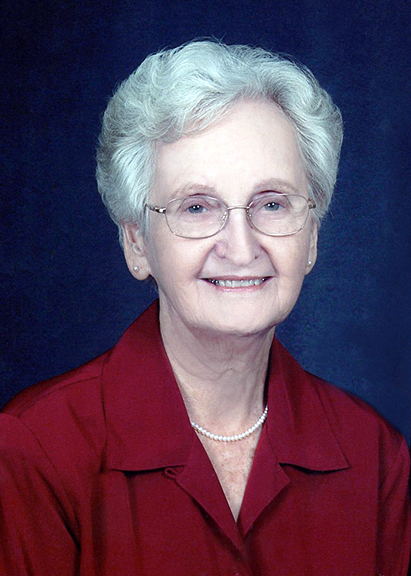 Doris was one of the sweetest people I have ever known. She was kind to everyone she worked with and such a blessing to the teachers and faculty at Langham Elementary. My prayers are with Deena and Angie and their families. I pray for comfort during their time of grief.

My deepest sympathy to Hugh and the family. May the God of all comfort bless you in your time of grief.

Our thought's and Prayers are with ya'll during these days ahead. I'm the youngest son of Gene and Mildred. It's been many years since we've been in touch, but have good memories of Aunt Doris! Love, Danny Joe and Sherri Coleman

Sending my condolences for your loss and prayers of comfort to your family.

Mr. Devore and family, I am praying for you all. My family offers our deepest condolences. Dad enjoyed the friendship of your family and He spoke of you both often.. I pray the Lord will lift you and give you the peace that you need.. Scott Bush

Doris was such a sweetheart, and she was so supportive when I worked with her at Langham. My condolences to your whole family, Deena. Prayers that comforting memories will be with you.

Hugh, Angie, Denna and Families My thoughts and prayers are with you. Your faith, family, and friends will get your through these difficult days. Treasure your memories.

So sad to hear of this sweet ladyâ€™s passing! Prayers for all her family!

Our Langham family is diminished by a truly lovely lady and great secretary. May her family find solace in the loving memories that live on.

Condolences to Angie and family. My thoughts and prayers are with you all.