Doris Mae Lindberg Mabry passed away on Saturday evening, February 8, 2020, at her home in Kingwood, Texas. Doris was born on April 2, 1923 in Chicago Illinois to Edward and Bessie Lindberg. She attended Austin High School in Chicago and worked as a cost accountant at Celotex Corporation in downtown Chicago during World War II. While walking to lunch one weekday she met her husband, Bob Mabry from Beaumont Texas, a young Marine stationed at Navy Pier while attending Officers Candidate School. It was literally love at first sight and a long-distance romance ensued over the next several years while Bob served as an officer in the Sixth Marine Division at Okinawa and Iowa Jima in the South Pacific theatre and in China after hostilities ceased. Bob’s first stop upon his return to the United States was Chicago. He asked Doris for her hand in marriage, she accepted, and after a relatively short engagement they were married and moved to Beaumont where they spent the next fifty years together raising four children.

After Bob died, Doris spent the next twenty-two years enjoying her friends and fellow church members at Trinity United Methodist Church, and spending time with, being an inspiration to, and setting an excellent example for her children, grandchildren, and great-grandchildren.

Doris was preceded in death by her parents Edward and Bessie Lindberg of Chicago Illinois, her husband Bob Mabry of Beaumont, Texas, and her sister Barbara Crane of Hoffman Estates Illinois.

A gathering of Mrs. Mabry’s family and friends will begin at 10:00 a.m., with her funeral service at 11:00 a.m., Saturday, February 15, 2020, at Trinity United Methodist Church, 3430 Harrison Avenue, Beaumont. Her interment will follow at Forest Lawn Memorial Park, Beaumont, under the direction of Broussard’s, 1605 North Major Drive, Beaumont.

Memorial contributions may be made to Julie Rogers “Gift of Life” Program, 2390 Dowlen Road, Beaumont, Texas 77706. 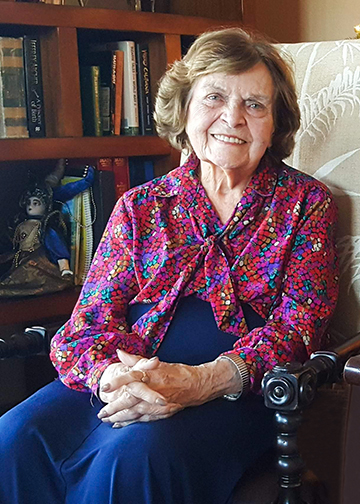 I 'm sorry to here of Doris passing, I loved talking with her , She was such a lovely person, and words cannot express how much she will be missed , she will be angel watching over us all God Bless

Dear Mabry Family, Billy and I have wonderful memories of your parents being such great neighbors to my parents and then to us. We really missed Doris when she moved, especially our over the fence conversations. She always had a smile on her face and a sweet hello. I want to imagine that Bob, Doris, Mac, and Ganell are having a wonderful time catching up on old times. Billy and Dionne Fontenot

Dear Mabry cousins' My heart is braking. I miss my Aunt Doris. She was a second mom to me. We had wonderful conversations on the phone. I know she and her sister Barbara, my mom, are watching over all of us. We love you Aunt Doris.

Dear cousins, Your mother was such a beautiful person, inside and out, who always made people around her feel special. She was very important to my mother, her little sister, and to Bev and Bob and me. The video shows what a beautiful legacy she left of children, grandchildren and great-grandchildren. May memories of her comfort you in this time. Love, Cindy