George graduated from First Moscow State Medical University in 1971. Subsequently he earned his PhD in Toxicology in 1974. He worked as an Associate Professor at the University of Moscow where he was highly respected and established in his field. In 1980 he left his homeland immigrating to America to escape the evils of communism. He completed his residency at Mount Sinai Medical Center and Cleveland Clinic in Cleveland, Ohio. In 1985 he moved to Port Arthur, Texas where he opened his Diagnostic and Internal Medicine Clinic. In 1993 he relocated his office to Beaumont, Texas.

George was a 32nd degree Mason and a member of Tolerance Lodge #1165 in Beaumont. Aside from his pride in his Slavic heritage, George had a deep love of culture and traveled all over the world in tribute. George was a talented musician, and had a great appreciation for art, music, literature, and tradition. From his escape from communism to his self-made success and his belief that what is right trumps glitter and gold, he stood for the truth no matter the cost.

Survivors include his wife of thirty-years, Connie Zuzukin of Beaumont; daughters, Shayne King of Beaumont; Shayla Zuzukin and her fiancée, Wade Watson, of Beaumont; and Alexandria Marrow and her husband, Rob, of San Antonio; son, Dr. Vladimir Zuzukin of New Orleans; brother, Boris Rostovtsev and his wife, Marina, of Moscow, Russia; grandchildren, Mila, Bennett, and Vivienne Marrow of San Antonio; his faithful nurse of twenty-three years, Jacqueline Williams; his beloved Persian cats, Casper and Mikey; and brother-in-law, Charles Haggard and his wife, Jean, of Jefferson, Texas.

He was preceded in death by his parents and very fun-loving son-in-law that he loved to hang out with, Dr. Jim King; and numerous close friends.

Memorial contributions for Dr. Zuzukin may be made to a charity of one’s choice.

A celebration of Dr. Zuzukin’s life will be held at a later date. 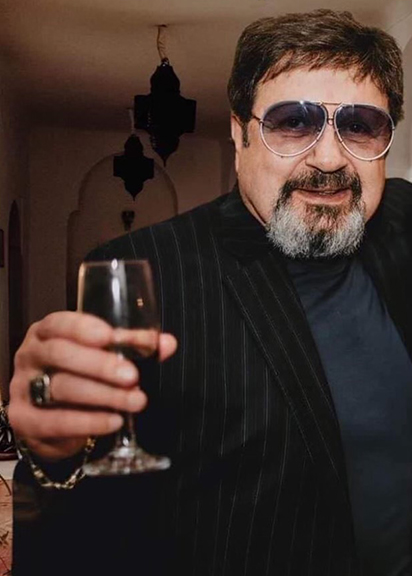 Connie; Kay and I are both sadden for your loss and our prayers are with you and the girls as you work your way through George’s passing. When I first became a patient of George was back when he was the new to the area and worked with Dr. Quick and Dr. Pratt, When Dr. Pratt retired, his office called to find out what I wanted to do with my file. My response was, what do you suggest, they suggested I visit with the new guy Zuzukin. I said OK, just send it to him. Their response was he wants to interview you before he will accept you, needless to say I passed the interview and George became my Doctor. That was in the mid to late 1970’s some 50 plus years ago. Georges care and attention to our health needs was always correct and for that I am most appreciative and am here today. He really cared and love his profession. May peace be with you. Bill

In Loving Memory of my Doctor for 30 years who also became a friend.
Prayers of comfort for you Connie and the entire family,

We mourn with you in these days of sorrow. Untimely passing of your husband and my brother Yuri is a terrible loss for our family. His bold personality, brilliant mind, and outstanding medical talent will remain forever in hearts of all those fortunate know him in life, friends, relatives, colleagues, and multitude of patients.

Goodbye Yuri Vladimirovich,rest in peace.I recruited you to our medical practice in Port Arthur in 1985 and we shared call, covering one another’s patients for 8 years. I have many good memories of our time together but one stands out. It was after a grueling 2 week medical malpractice trial when,after the jury returned a verdict for us,we repaired to Carlos restaurant. We ordered food and drinks. Then you noticed that the grand piano was unattended and you sat at the piano and played the most amazing improvisational jazz. My memory is that you played for over an hour and brought the house down. A magical evening. My deepest condolences to the entire Zuzukin family including Vladimir Yurevich.

Connie and family
My heart goes out to you and your family. I have you’ll in my prayers. I know the lord is going to help you’ll get through this time.

It’s so hard to imagine life without my brother! So many fond memories with him and his family! He was kind, caring, funny, difficult and much loved, all in one! He was an amazing man and an awesome Doctor. I Hope he is reunited with Sol, and his Mom and Dad. May he Rest in Eternal Peace! I love you Yuri!

Doc, in my opinion, was the absolute best doctor in Beaumont. He was very personable, true to his word and he really cared about his patients. He is definitely going to be missed, but not forgotten. Rest in peace, Doc, Godspeed and we’ll see you again someday. Mark R. Coffee

To my Dear Pop,
You have always made me laugh & smile. You taught me so much in life medical, how to cut a steak like a LADY, and how to walk in high heels!! I love you SO VERY MUCH & will miss you beyond belief. Be at Peace Pop—You are always in my heart—Love, your Gretta (my nickname he gave me).
Shayne

Dear Connie, my heart continues to break for you. George had such a gift for making his friends feel like Family. His genuine kindness and love of you, his family and this country was always a constant. What a beautiful and brilliant couple you two were! I have been honored to call you, my friends. George will never die in our hearts. His bigger than life personality and heart has impacted all of us who appreciated and respected him. Continued prayers for the family and comfort for you, Connie. May we all celebrate the life of this amazing man!

Connie I am so sorry for your loss. Dr. z was a wonderful man who was very talented in many areas. I will miss him and his postings on Facebook. He always put a smile on my face. Praying for you and your girls. Remember God is good all the time and He has you in His hands. Love you Sweetie-Jan

I was sorry to hear of the passing of Dr. Zuzukin. I worked for him briefly in the early 90s and had so much respect for the way he practiced medicine. He was always kind to me… My sincere condolences to his family…

Connie, I hope the love, sympathy and concern of others help ease your hurting heart.💔

Dear Connie
There’s no comforting words one can give, after losing a love one. George was so much more than a great Doctor. He lived his life for his patients. I will miss My Friend, My Doctor and his Gift of Living Life to the Fullest, through all your travels abroad. I enjoyed listening to the stories shared and will miss all the years we took for granted.

A great man and a caring Doctor. He will be missed.

My heart has been sorely wounded by Doc’s passing. I was his patient since 1993. The.last time we met we hugged like the friends we were. It was the first time he had seen me since I had been given my kidney transplant. His large personality and beaming smile were the best medicine He loved his patients, family and friends. Rest In Peace my friend; Rise in Glory! ♥️