Eddy Brammer, Sr. passed away on November 4, 2022, at his home in Nederland, Texas, where he spent his final days surrounded by family and friends.

Born on October 28, 1957, in Port Arthur, Texas, Eddy was a lifelong resident of Nederland and spent his early years playing sports, hunting and fishing on the Neches River, in Hondo, Junction, Lampasas, Topanas, Ivanhoe and Toledo, learning construction from Paw Paw Frugé and running away to his grandparents’ house to enjoy his Maw Maw’s cooking, which he loved. After graduating from Nederland High School in 1976, Eddy and Paw Paw Frugé formed Frugé Brammer Construction. Soon after, Eddy gave up his pink Harley with purple flames when he learned he was going to be a dad and married Sandra Mallet. During these years, Eddy enjoyed building his business, having friends over to their home, hunting in Colorado, fishing any chance he could, and being a husband and father.

Eddy survived many obstacles in his life, but his ‘can’t never could, can will’ and ‘winners never quit and quitters never win’ attitude always got him through them. In 1995, Eddy started his own company, Brammer Builders, where he specialized in building custom homes. Later on, Eddy focused on roofing and became an expert in dealing with the insurance companies to help people in disasters. Eddy loved to travel the country in his truck, often sleeping in his camper along the way. Eddy enjoyed sharing stories of his adventures with family and friends which included driving up the west coast where he once slept on the Maka Indian Reservation fishing for salmon and pot latching with the Indians to the time he spent in Florida at Mama Rose’s house in Winter Garden whom he met in a classified ad trying to find a place to stay that would accept his dog, Mojo, while roofing near Orlando. A Texan through and through, Eddy was very proud to sport his Texas license plates and white University of Texas Longhorn decal on his truck when roofing in Oklahoma. Eddy was also an avid fan of music. Whether he was playing ‘Welcome to the Jungle’ with his windows rolled down while driving his truck through the ‘zoo’ on Crystal Beach, attending ZZ Top concerts, or reading about or listening to his favorite musician, Willie Nelson. Eddy had music in his heart and it was always blaring loudly on his truck stereo for the world to hear.

Eddy was most proud of his two sons Eddie Jr. and Brandon and was overjoyed to see them receive their high school diplomas and attend The University of Texas at Austin. Most recently, Eddy was a doting Paw Paw to his Ellis Ann who lit up his world and put a big smile on his face. Words simply cannot describe the amount of love and adoration Eddy had for his granddaughter, and there was nothing he wouldn’t do for his ‘angel’. Eddy also loved the family crawfish boils and spending time with his extended family. He was known for spoiling his nieces when they were kids, and he loved his two sons and granddaughter with all of his heart.
Family was everything to Eddy.

Eddy is preceded in death by his mother, Eldora Frugé Brammer; grandparents, A.L. and Margaret Frugé and Albert and Dora Brammer; and the mother of his two sons, Sandra Brammer.

Stubborn with a heart of gold, Eddy’s life motto was ‘Peace and Love’ and he certainly left his mark on this world. Eddy was a good man and he will be remembered and missed ‘Always & Forever.’

A gathering of Mr. Brammer’s family and friends will begin at 12:30 p.m., with his funeral service at 2:30 p.m., Friday, November 11, 2022, at Broussard’s, 505 North 12th Street, Nederland. His interment to follow at Oak Bluff Memorial Park, Port Neches. Casual attire is encouraged by the family. 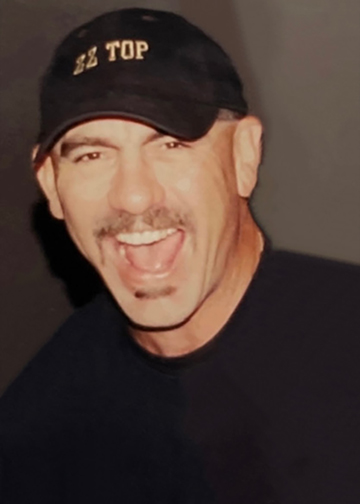 Mr. Eddie was always one of my favorite customers to talk with. In a lot of ways, he reminded me of my own father. Same age, same taste in music, same zest for life. It didn’t take long for me to consider Mr. Eddie a friend, beyond a customer. He was always just wanting to talk…and i’m glad i did more listening than speaking. He will be missed, as we know. Only knew him a handful of years, and i’m thankful for them.

I met Eddy in Florida in 2005, Eddy had his old straw beach hat on and his dog Mojo in the back of his pickup truck. We became close friends even though he referred to me as Yankee. We dealt with a lot of adversity dealing with the damn insurance companies helping people through many hurricanes together. Probably the most memorable hurricane was Rita, where we helped many people get roofs in his town. We spent many a night in his office writing supplement claims to get more money to get people roofs again. Eddy was a true gentleman and always said “it’s all good” … Eddy will definitely be missed… take care brother…see ya on the other side…

We will miss him terribly. He was always so helpful to my mom and told the best stories. Mom got to where she would talk to him about getting things fixed around the house and if he couldn’t do it, he sent someone. Always reassuring her that he would help her any way he could. She is heartbroken.

May GOD accept Eddie into His loving heart and arms, and grant him salvation and an eternal life, as a member of the family of GOD, in Heaven.

You boys picked the perfect picture! This is definitely the Eddy we all know. May he finally Rest in Peace and in celebration of a life well lived. Peace and Love to you guys during this time of reflection.

To all of Eddie’s family, I’m going to miss Eddie allot. I’ve been friends with Eddie since high school, and little Eddie you’ll remember me from living across the street from y’all on Avenue F. and coming to visit y’all on 27th street. Over the years he installed at least 3 roofs for me which never leaked. I’m going to miss his unannounced visits that we shared outside in the shade listening to all his great stories. Our neighbors heard the stories also because of Eddie’s loud booming voice…haha. My world is a sadder place now that my friend is gone. Save me a place Eddie, we’ll talk again.

I met Eddy in Florida in 2005, Eddy had his old straw beach hat on and his dog Mojo in the back of his pickup truck. We became close friends even though he referred to me as Yankee. We dealt with a lot of adversity dealing with the damn insurance companies helping people through many hurricanes together. Probably the most memorable hurricane was Rita, where we helped many people get roofs in his town. We spent many a night in his office writing supplement claims to get more money to get people roofs again. Eddy was a true gentleman and always said “it’s all good” … Eddy will definitely be missed… take care brother…see ya on the other side…