Mr. Burrus died on September 10 at his home in Kingwood. He was 94.

Felix Lewis Burrus was born in the small, East Texas sawmill town of Hartburg on Aug. 19, 1926, to Eugene A. and Vivia (Dever) Burrus. His father was in the lumber business. The family moved to Beaumont when he was a child.

After graduating from Beaumont High School at the age of 17, he enlisted in the U.S. Air Corps as a cadet. He received basic training at Keesler Field, Miss., with additional training at Hill and Sheppard Air Force bases. He served as an instrument and maintenance specialist of B-29 bombers in the 8th Air Force Division in Luzon, The Philippines.

After two years, he returned to Texas and joined his father and brother in the lumber business, attending the University of Texas at Austin and Lamar University during that time.

He later sold his interest in Burrus Lumber to his brother and formed several home development companies, building hundreds of homes in Beaumont and the surrounding area.

Mr. Burrus was active in many civic and social organizations including the Beaumont Country Club, the Beaumont Gun Club, the YMBL and the Young Presidents Organization. He was a member of Trinity Methodist Church.

Mr. Burrus was a seventh- generation Texan, a direct descendant of the notable Dever pioneer family who were part of Stephen F. Austin’s “Old Three Hundred.” His ancestors settled on 4,500 acres in what is now Brenham and were also significant in the impact of Methodism in Texas.

Mr. Burrus was a widower; his wife, Lillian Ryen Burrus, died in 1991. In later years, he lived in Austin and then moved to Kingwood in 2019.

Mr. Burrus is survived by three children and their spouses: Cynthia and Larry Shiflet of Kingwood, Jessica and John Bowlin of Pacific Palisades, CA., and Ryen and Brianna Burrus of New Zealand; and by grandchildren Wilson Calvert, Olivia Faulkner, Hannah Bowlin, Will Bowlin, Parker Bowlin, Lillian Burrus, and by several nieces and nephews. His son, Felix L. Burrus, II, died in 1963.

A family memorial will be held at a later date.

When asked the secret to his long life, Mr. Burrus quoted his favorite singer, Frank Sinatra: “I did it my way!” 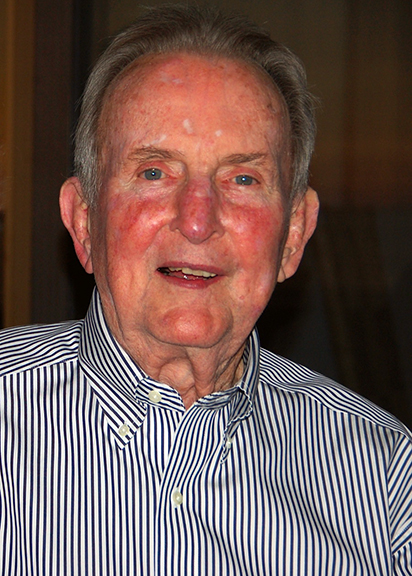 Jim and I just learned of Felix’s death. He and Lillian were two of our dearest friends. We appreciated their caring and faithful friendship. They were two of the finest people we have ever know and miss them greatly to this very day. May God hold you in the hollow of his hand, dear friend.

Jim and I just learned of Felix’s death. He and Lillian were two of our dearest friends. We appreciated their caring and faithful friendship. They were two of the finest people we have ever know and miss them greatly to this very day. May God hold you in the hollow of his hand, dear friend.

Thoughts and prayers to the Burrus family, I had the pleasure of dealing with Felix on numerous occasions dealing with his interest in Oil and Gas minerals, he was always a gentleman and a joy to be around.

Needless to say, Felix was quite a character and lots of fun to be around. As a trust property manager, I first became acquainted with Felix in connection with his trust banking relationships with my employers. Among many other things, Felix had a keen interest in oil and gas matters, particularly if they involved the old Sabine Tram Company minerals situated in Newton and Orange counties. I well remember him mourning the loss of his wife, whom he obviously adored above all others. My last encounters with Felix were at the now closed, historical Quality Cafe on Liberty which Felix occasionally frequented with certain old buddies of his, including Smyth Sheppard, George Dishman, Jim Austin and others, all now passed on themselves. From the wonderful obit of Felix, I gather that he subsequently moved on to Austin and then to Kingwood, which explains how I lost track of him. Rest in peace, old friend.

Cynthia, So sorry about your dad.. Sending you all prayers during this time..

My deepest sympathy to Cynthia, Jessica, & Rhiine.... George & Felix were great friends & Felix alway called George "Hero".... He was the greatest, one of a kind...will be missed by family & so many friends.. Much love to all of you..Judy

Dear Cynthia, We are so sad to learn of Felix's passing. It is never easy losing a parent. We knew your Dad though our friendship with you. We were just thinking of him the other day and wondering where he was living. Hugs to you and all of his family. Love and miss you. Mindy and Jay

Our thoughts, prayers and condolences are with the family. Always enjoyed the opportunity to visit with Mr. Burrus.

May the Peace of The Lord be with Felix and his family.. We had lots of shooting fun years ago. Felix called me the week before he passed and we had a great visit. A Beaumont character who will not be forgotten.

My heartfelt sympathy go out to Cynthoa Jessica and Rhine and all their family.Felix was a great longtime friend .He was a wonderful husband father and caring friend. He will be missed by all who knew him. I got to speak with him a few months ago. He definitely had a spirit and heart of gold.. May he rest iin peace.

Dear Jessica, Ryan and Cynthia,, your family is in our prayers. Lillian and Felix were very dear friends of my parents, Nick and Alene Scallon. My mother, Alene passed away 3 years ago but Dad is still living and the same age as Felix. Dad and Felix played golf every Wednesday and Saturday at the Beaumont Country Club.. Mom and Dad had numerous dinners or dinner parties with Lillian and Felix. . Often both families would also go to dinner at BCC. This is where Jessica taught me how to drive with the old yellow caddy while our parents were sipping on Clearance's famous manhattans. Dad was saddened by Felix's passing but said he was his best friend in Beaumont. Felix, Lillian, Nick and Alene often talked about retirement in Kerville.. Felix was always clever and made everyone smile. He was a class act . We all looked up to Lillian with her grace and fashion style. They were precious to our family and we have so many happy memories. Love, Kelly Scallon Broderick