Floyd Allen Landrey, 86, of Kingwood, died Friday, February 12, 2021, at home surrounded by family.  He was born on August 7, 1934 in Morris, Oklahoma to Fred and Maude Harbison Landrey.

When Floyd was 12 years old, he and his family moved to Okmulgee, Oklahoma after his father was hired as foreman of the 10,000-acre Baker Ranch.

In high school, Floyd was chosen by Senator John Russell to serve as a Page in the Oklahoma State Senate.  After graduating from Okmulgee High School, the Baker Ranch was sold and the family moved to Groves, Texas.

Floyd attended Lamar University and graduated with a Bachelor of Science degree.

After graduation, he married Wanda Anita Cruse on September 27, 1957.  Less than a month later, Floyd was drafted into the U.S. Army where he served for two years.  After his discharge, he was accepted at Baylor University Law School where he received his Doctor of Jurisprudence degree in November of 1961.  After graduation, he and his wife moved to Beaumont where he worked for a short time for the Texas Highway Department in the Right-of-Way Acquisition Department.  He then served as First Assistant Beaumont City Attorney.  In 1968, he and Attorney Ray Moore formed the Moore, Landrey, Garth and Jones Law Firm.

Floyd was a 32nd degree mason and a member of the Beaumont Lodge 286 for fifty years.

Floyd retired in 2012 and he and his wife moved to Kingwood, Texas.

Floyd was preceded in death by his parents and his three sisters; Ricca Nelson, Anna Lee Weatherford and Dorothy Reyes. 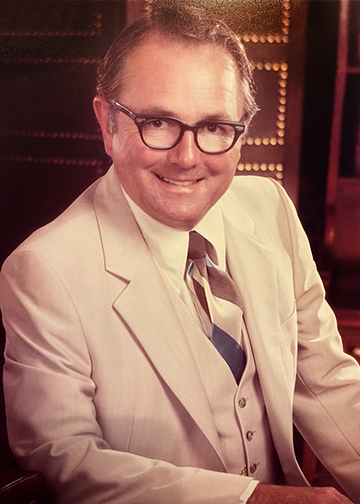 So sorry to see his passing. Mr. Landry helped me many years ago when my children were young and I needed an attorney. He never asked for one dime but knew I needed help as a friend. He will and always be my hero I respected.

What a pleasure it was to get to spend time with Floyd during these last several years. Even when his words became few and far between his smile said a lot.

Wanda, I am thinking of you and your family as you go through these days. I will keep you in my thoughts and prayers.

I was proud to work for this wonderful man at his firm. He was the best employer I have ever had and was a complete joy to be around and helped me in so many ways.. I just lost my father two weeks ago and he was also a Mason. I offer my prayers and condolences for the family. Fly high Mr. L...

Wanda, I am so sorry for the passing of Floyd. His name brings up such fond memories of many years for me and my family. I will keep you and your family in my thoughts and prayers.

I had the pleasure of meeting Mr Landry during the time I worked for the District Clerks Office inHardin County. Mr Landry was always good and kind to us. He had a great sense of humor. He will be missed by all that knew him. I am so sorry for your loss

We were so sorry to hear about Floydâ€™s passing. He was a friend and wonderful attorney. Keeping your family in our prayers. Terri and David Nelson

We were sadden to learn of Floydâ€™s passing. Our thoughts, prayers and condolences are with Wanda and the family. Floyd was a great individual that was always up and we enjoyed his fellowship. Floyd will be missed by those that were able to call him a friend. Becky & Rodney Ames