Frankie was a Beaumont native born and raised, his parents Margarita and Frank Flores and younger siblings Israel, Joshua, and Frances. He graduated from Central High School and joined the United States Marine Corps where he was an expert rifleman in special forces.

Like every other young boy, he made some questionable decisions prior to his time in the military, but with a good foundation and teachers who saw something in him, He made the decision to enlist in the military. He said he thought he was strong, but there he met true strength and heroes. Heroes that would become his mentors. When he spoke about his time stationed in various parts of the world, he spoke with great pride and sorrow. He is a proud marine and like many of his other life’s mottos, he always said: he was a man by nature and a Marine by act of God. He truly loved God, his family, and his country. He was a proud American.

He loved his family. He struggled with many haunting thoughts from his life in active duty, but the love of his father and family brought him through some of his darkest hours. With such a big family he enjoyed family get-togethers with his many cousins, aunts, and uncles but none of those relationships opened the secrets of his heart like his first-born niece Chloe. The first time he held her it unlocked a love he’d never felt before. He was a wonderful uncle to all of his nieces and nephews, (but don’t be jealous) Chloe was the one that brought new light.

Frankie was definitely a family man, but he could never see being married and having that family of his own. Honestly, he thought that was his punishment for acts of war. Then, there was Valencia…… an old friend to the family raised in the same neighborhood. Both had gone their separate ways and lived the lives that God set the pattern for with many heartaches, joys, and growth. God knew that he was preparing them both for one another. They started dating (sneaking around) because both families knew of one another and just couldn’t see how they would make a fit, but Frankie fell in love, though she said it first when he would tell the story. When Frankie went to his family to receive their blessings, he made it clear he wasn’t asking for permission, he was there to let them know he was getting married. August 6, 2011 they were married, a match grounded in faith in God. Frank always made sure that the Lord came first in their lives, because he would say, “if she loved God, she would always love me.” He just knew that. They became best friends. Family functions and gathering just weren’t the same if they weren’t attending together. Then, it was always, “where’s Valencia” if he showed up without her or “where’s Frankie” if she showed up without him. They enjoyed what God had given them and they knew the true meaning of cherish, honor, love, in sickness and in health and though he tried to pay the minister extra to put “obey” in the vows, he knew she was just as much a fighter as he was and even if obey had been in the vows, he’d do anything to make her happy.

Frank was the love of my life and I his. He made everyone who knew him better. He was well respected by everyone and if ever there had been an example to follow it was him. He loved God and knew that the answers to all of life’s struggles could be found in Christ. He was ordained to be a leader; in his home to his wife, to his siblings, on the job site, and any other circles he became a part of amongst family and friends, even in volunteer roles I would drag him into that he would so graciously accept without any fuss. His motto for friendship was that there weren’t many, and if he counted you as a friend the expectation was high in honesty, loyalty, and love. He had lots of mottos and quirky sayings, but somehow, he always knew what to say. Sometimes (most times) not always what you wanted to hear because he was right. He made everyone the best versions of themselves that they could be.

Today, as we say goodbye and celebrate the life of an irreplaceable man, we are all stronger because of him. He would say that death is a part of life we all have to meet it sometime, and that he loves us and hopes that we all knew it and that he’s gone to place with no more sadness or pain. You don’t have a choice but to live through it and let God carry you the way. He will take care of you in your weakest hour even when you don’t understand, He has a plan.

If there is one thing, he’d want all of us to know; it is about God’s love, sovereignty, grace, and mercy. Trust in the Lord. His life was one of the best examples of what that looked like. 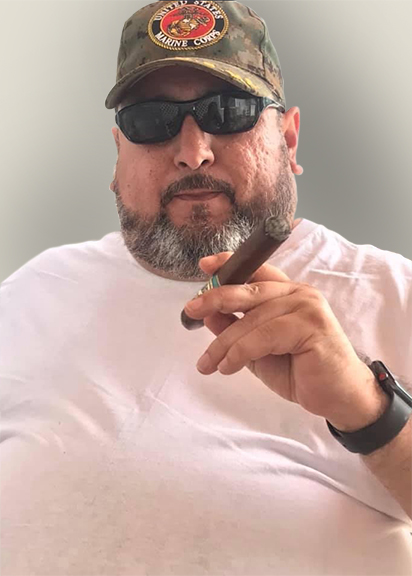 A Gathering of Family and Friends

A Gathering of Family and Friends

Valencia, I am so sorry for your loss. Cherish your sweet memories. Rest in peace, Frankie and thank you for taking care of Valencia. Condolences to all of the family.

You are in my thoughts and prayers. I love you,.

Sending my deepest condolences praying for comfort for you and your families loss along with strength to continue to make it out of bed on those not so great days. The Lord is close to the brokenhearted He rescues those whose spirits are crushed. Ps 34:10 NLT Hugs and prayers Stefanie Norris

Sending my condolences. I will continue praying for you as well as the family.

Sending Prayers & Love to all my Flores Family!!! R.I.P Frankie you will be Missed!!!

While only knowing Mr. Fred for a short while I can say he was a good man and he will be missed by all. Blessings to his family during this time of transition.

Rest well cuzzin... You will truly be missed cuz...

You will be missed. Forever in our hearts.

Valencia we are praying for you and the entire Flores family! Rest In Peace Frank !

Keeping the family in my prayers Rest in Peace