Survivors include his wife of thirty-eight years, Claudia Martinez; and children, Laura Cardenas and her husband, Juan and Melissa Olvera and her husband, Sergio, all of Winnie; grandchildren, Gabriel Cardenas, Julian Olvera, and Mila Olvera; brothers, Constancio Martinez, of San Perlita, Texas; Marcial Martinez and Eduardo Morales, both of San Luis Potosi, Mexico; Ismael Martinez, of Winnie; and Maurilio Martinez, of Fannett; sisters, Alejandra Morales and Antonia Martinez, both of San Luis Potosi, Mexico; and numerous nieces and nephews.

He is preceded in death by his parents; brother, Simon Martinez; in-laws, Vincete Uribe and Donaciana Peralta. 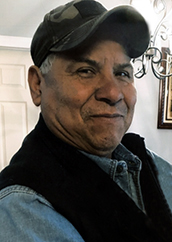 Martinez family, you are in our prayers, may God give you peace and strength during these difficult times.

Claudia my deepest sympathy go out to you and your family