Harold moved his family from Hammond, Louisiana to Beaumont, Texas in 1964, but not before graduating Hammond High and attending Louisiana State University. Harold moved to Beaumont upon accepting employment with The Dollinger Steel Company. He, and his huge IBM servers ran all of the data processing for Dollinger and many local companies. He was so successful building his client base for data processing, he purchased the IBM computers from Dollinger Steel and started his own company “All Computer Services”. He ran his company until retirement.

In additional to running his own business Harold never sacrificed time away from his family. He spent many years coaching football through the Junior Cardinal Football League and spent just as many years coaching Little League Baseball up into Pony League Baseball. Harold was an exceptional athlete in his own right as he was a star running back with the Hammond High Tornados. He was such an inspiration to a large majority of the youth in Beaumont.

Harold’s hobbies included fishing, carpentry, woodworking and winemaking. Many children received the rocking chairs he built. He also built Adirondack chairs for his family. His home was filled with bookcases and tables built by Harold. Lucky were those who received a gift of wine or jelly that he had made. He is truly missed!

Harold did not have to preach to his five children on how life was supposed to be lived . He led by example, and we followed in his footsteps.

Harold lost his first wife, and our mother, Helen Lois Burton Core, who passed away in 1994. He remarried in 1995 to his current wife Ginny Malnassy Core and they had been married twenty-six years. After retiring Harold built his dream house with Ginny deep in the wooded thicket located in Bleakwood, Texas. They lived the country life for ten years before returning to Beaumont.

The family would like to offer a very heartfelt thank you to Harold’s caregiver Natalie Arline for all of her passionate care of our beloved Harold. Words cannot express our gratitude. You are truly a member of our family. Thank you also to all of the nurses and staff of Best Hospice and Collier Park. You all were so compassionate in your care of Harold. Thank you. 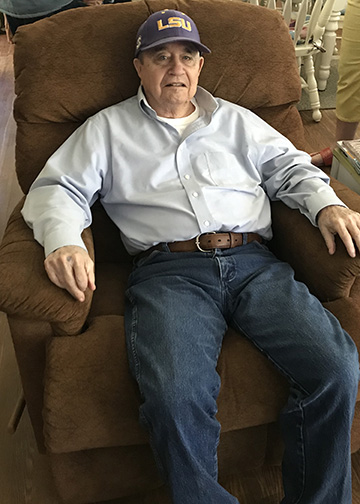 Teri, Pat and Donnie, I am so sorry to hear about your Dads passing! Please know you are in our thoughts and prayers.
Kristy Golson -Fuller
Dolores Golson

Pat, I am so sorry for the loss of your Father. You and your family are in my THOUGHTS AND PRAYERS 🙏🙏 R I P MR. CORE🌹🙏🙏

My deepest sympathy to the family. Harold was a great man and friend. Always enjoyed talking to him.

Teri, so sorry to here of your dads passing you are in my thoughts and prayers .Billy

Bobby, we are so sorry for your loss. Sounds like he had a great life and a full one. Can’t ask for more than that. Prayers 🙏🏻🙏🏻🙏🏻🙏🏻

I met Mr. Core years ago when I worked at the bank. Always so kind and sweet. Prayers for his family. May the memories give your peace and comfort.