On May 23, 1954, in Beaumont, Texas, our God of all creation gave life through the birth of Hector along with his surviving twin sister, Becky. He was the only son born of Elias Olivan De La Rosa and Benigna Silva De La Rosa.  On September 9, 2022, after several years of willful determination and a strong fight battling Parkinson’s disease along with Lewy body dementia he was met with open arms by his Lord and Savior who would lead him home.  Although our hearts were broken on this morning his heart was filled with joy that he would again see his loving parents. This would be a day he would often say he was ready for and looked forward to rejoicing in. This would not have been his first battle with a serious illness in that at the very young age of 7 he was stricken with Poliomyelitis and there were concerns he would never again walk. Through the grace of God, support and prayers from his loving family and friends their prayers were answered. There would be wonderful doctors, nurses and therapists ready to take over and he would receive tank physiotherapy treatment at Martin de Porres Hospital. He would go on to make a full recovery and although he often endured pain that accompanied physical therapy, he was so grateful to have been given that chance for a full and active life to come. He would later reap the benefit of this therapy. This was displayed in skillful use of his legs with great precision needed while playing the trumpet in marching band at Beaumont High School. He graduated as a proud “Royal Purple” in 1972. Later during his college years at Lamar University, he began weightlifting and would continue this for many years to come.  This would be a sport neither he nor his family would have ever dreamed he would have been able to participate in.

While still in high school in 1972 his family would open Little Acapulco Mexican restaurant in Beaumont. He would graduate from Lamar University in 1978 with a Bachelor of Business Administration in Management all while having worked in the family business. He would continue working alongside his family until closure of the restaurant in 1982. After graduating from Lamar and ready to take on a new career path he would work for Texaco refinery in Port Arthur in the Accounting and Payroll division. His next and final career venture would be in 1984 when he began working for the United States Department of the Treasury – Internal Revenue Service holding positions of revenue agent, collections manager and bankruptcy advisor. He would continue employment with the IRS until 2014 when he retired after 30 years of service.

He loved the Lord, and this was expressed foremost in the respect and undying tender care he showed his parents.  This love was felt by his entire family and especially his twin sister Becky.  When any of his sisters needed him there was never a time that he would not be there for them.  The “spoiling” by his 6 sisters was responsible for him having such a soft heart and laughingly why he could also be a “spoiled brat” at times. He would share this love with many others outside the family having many friends who loved him dearly.  He would eventually love another that would be like no other when he and Yolanda Lopez began an 8-year courtship before marrying on June 18, 1983. Of course, if the truth be known it was longer than this because Yolanda’s “crush” on Hector began way before their dating years when they both attended Templo Bautista Baptist Church in the 1960’s. They were both so honored to have their pastor from this church, Brother Louis Lowry later officiate at their wedding. Their marriage of 39 short years would bring a lifetime of happy & sad memories but always ending with undying forever love and mutual respect. Hector loved all animals but had a special place in his heart for dogs. From childhood into his adult years’ dogs were ever present. His first furry friend as a child was a Collie mix named Snoopy who he was crazy about. As an adult there was his most precious rescue Shih Tzu “Cody” who blessed our lives with 16 years of companionship. Then there would be so many others to fill his heart with joy including Jacque, Cotton, Piper, Ralphie, Bella, Chulo, Brody and Luke. Although he could not recall their names in the past few years our loss of Bella and Ralphie this year would have saddened him so. He leaves behind furry friends Chulo, Brody and Luke. He was an avid gardener and loved plants, plants and more plants especially tropical flowers. The only thing he loved more than plants were Italian planter pots and Greek statuary. So much so that people would often ask if he owned a nursery because he embarrassingly had so many!  He loved the “oldies” music and vintage cars.  He should have been a teenager in the 1950’s because that was the era he loved most.  He loved all the artists in this era but Frank Valli & the Four Seasons, the Jersey Boys, the Temptations, Smokey Robinson and the Miracles were his favorites. He loved old Corvettes, 57 Chevy’s, roller coasters and road trips. Whether it be hunting for a “hole in the wall” restaurant with delicious Mexican food and a Mariachi band in Houston or a great steak at Del Frisco’s in Dallas he just loved having fun, shopping till we dropped, great food and restaurants with tablecloths! He would set a good example for his nieces and nephews by stressing that nothing worth having would ever come easy, getting a good education and not being afraid of hard work were important to him. He made it known that love, respect for our elders and family first was of utmost importance. For those who knew him best what we have missed most in the past several years was his outgoing personality, crazy antics and zest for life. The cruel debilitating disease that robbed his mental and physical strength would never be able to take away the comfort given by the loving arms wrapped around him by Jesus his Lord and Savior.

The De La Rosa family would like to express their sincere thanks to Dr. Jeremy Huff and nurse Penny Sirmons, Dr. Kandasami Senthilkumar for the many years of care and kindness shown to Hector. His wife would thank Hector’s twin sister, Becky, for being his loving care provider so that she could continue to work. Also, to his entire family who were always as close a call away when anything was needed to care for him, God Bless each of you. Yolanda would like to express her heartfelt appreciation and love for always being there for her, mother Mary Lopez, sisters Lenora, Ginny and Rosie. Ginny thank you so much for your photography skills. I can never thank you enough for this. 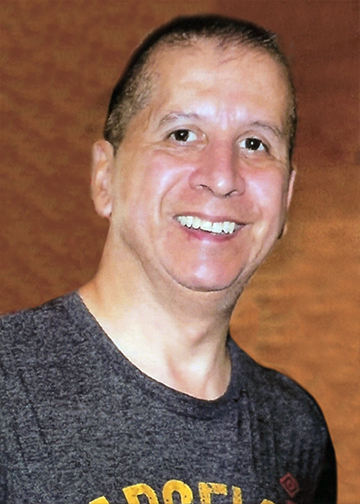 Yolanda, may God carry you in the palm of His hands during this sad time. I’m so sorry for your loss. Hector will be missed by so many, but most of all by you and all of his family. Please know I am here for you and love you. Rest In Peace Hector ✝️💐

Yolanda, we are very sorry to hear about Hector. We enjoyed having him as our backyard neighbor. Prayers for you and the family.
Cyndi and Pat

Yolanda, so sorry to hear of your loss. Prayers for peace and comfort for your family. Shirley

I started Fletcher elementary with Hector, then David Crockett jr high. We grew up in the avenues. Child hood friends, we had many happy memories growing up. My condolences to Yolanda and his sisters. Now he will travel with God’s grace

Ronnie and I are so sad to hear of Hector’s passing. What fond memories we have of the good times when you worked together. I hate that time has passed so fast and we have lost touch with so many.

My thoughts and prayers go out to Yvonne and family. God bless you🙏🏻🙏🏻🙏🏻🙏🏻

My dear sweet Yolanda; Kenneth and I are so sorry for you and your wonderful family’s loss. He left behind a large group of family and friends who loved you both so much. When we think of you and Hector a smile comes across our faces. Y’all always treated everything with humor and compassion. I know Hector is going to help hold you all up as y’all move through this very difficult time. We love you all very much.

Thank you Mrs. Eva for sharing your family and brother’s life story with me. I have never met Mrs. Eva family nor Hector, but just from meeting and talking to Mrs. Eva, I could tell there was a whole lot of Love’s ❤️ in this family and especially for Hector. My deepest condolences and sympathies for your lost. RIP Hector De La Rosa

Yolanda,and family we were so sadden to hear about
Hector’s passing. He was such a great person, we
were blessed to have known him. We met the family
through Eva many years ago. We worked with him
at Texaco also. Hector was truly a blessing, thank
you Becky for taking care of him. RIP dear friend
Our Condolences to all of the family.
Tommy & Rose PreJean

Our Thoughts and prayers are with you all during this difficult time Hector will be missed dearly. May rest in eternal peace

So sorry for your loss. My condolences to your family. Rest In Peace Hector.

Extending deep and heartfelt sympathy, to you and your family. May the memories keep you going with deepest sympathy Maria Martin Montiel.

Yolanda and family I am so sorry for the loss of Hector. I remember him with fond memories of MASH functions. May the Lord be with You and may he rest in peace!

What a blessing it was to be able to work for Hector and to become his friend for so many years. I am thankful to the Lord for the many times we spent together and look forward to seeing him again on the other side of this life!

Yolanda and family, I am so very sorry for your loss! I have fond memories of you and Hector. You will be in my prayers. May he rest in peace

Yolanda, I am so very sorry to learn of your husband’s passing. Ginny, was kind enough to text me and let me know. I had no idea he had such a battle. I will not be in town for the service but wanted to express my sorrow and my prayers to you and yours. Stay strong and I send you hugs today and the next and the next….

To know this man was to love him.He had a snappy smile and a twinkle in his eye.I enjoyed cutting his hair for 33 years. He was a impeccable dresser had confidence,but was also a tender hearted man,he loved his family ,wife and all of his furry friends…..he will be missed

What A Guy…. knew Hector for many years. Always had a smile on his face and always asked about my family. He was a kind, considerate, and humble man. He lived an exemplary life. Welcome home my friend, job well done. May Our Lord bless and comfort your family in their time of sorrow and always. Rest In Peace My Friend.