It’s been said that all a man really has when he pillows his head at night is his honor, integrity, and character. Ray’s life reflected a life of excellent character, undeniable honor, and solid integrity. When Ray stepped into a room, his presence welcomed others. There were no strangers. You felt cared for, loved, and valued. His love for justice and truth was balanced with his desire to help others, especially young people, find their way in this world. Many times, people met Judge under less than desirable circumstances, but he never made you feel like you were an inconvenience. He wanted the best for you. He wanted to see you succeed. He wanted to cheer you on.

His fatherhood spanned past Shane and Justin. He has adopted children all over Southeast Texas and beyond—men and women who have gained from his wisdom, his counsel and sometimes his justice. As a husband and father, he was faithful. His wife—his best friend. His boys—his pride and joy. His grandchildren—the light of his life. These were his trophies. These were the golden and bright spots in every day of his life. His name will live forever in many of our hearts.

After serving his country in the United States Air Force, he began his commitment to his community by becoming the president of the Hamshire Volunteer Fire department, later serving many years as the Fire Chief.  He was a driving force in establishing and building the local EMS service, dedicating 26 years as a medic.  He devoted over 24 years of his life as Justice of the Peace for Precinct Four of Jefferson County, where he served with honor and compassion. His passion and commitment to helping others has endeared him to everyone who knew him.

Additionally, he served as Co-Chair of the Local Emergency Planning Commission and was a member of the Child Fatality Death Review Team for the Garth House. He served many years at the Texas Rice Festival, including Board of Directors, and 2002 as President. Ray worked with Strategic Petroleum Reserve Environmental Review Team and Board of Directors at the Winnie Medical Center and Arboretum. He was also a Board Member for the Hamshire Fannett Education Foundation, and instrumental in establishing Hamshire Fannett Little Dribblers.

Ray is preceded in death by his parents, Roy Travis “Bo” and Onella Chesson; and grandson, Trevor Chesson.

His passion and commitment to helping others has endeared him to everyone who knew him. Throughout all of the endless hours of dedication to his community, he has always remained a devoted husband, a loving father and an adoring pawpaw.

A gathering of Mr. Chesson’s family and friends will be from 5:00 p.m. until 8:00 p.m., Wednesday, October 20, 2021, at First Baptist Church, 25304 Hwy 124, Hamshire, under the direction of Broussard’s, 2000 McFaddin Avenue, Beaumont. Shuttle service for overflow parking will be offered beginning at 4:30 pm Wednesday at the north parking lot of Hamshire-Fannett High School. His funeral service will be 11:00 a.m., Thursday, October 21, 2021, at First Baptist Church, with his interment to follow at Fairview Cemetery, Winnie. 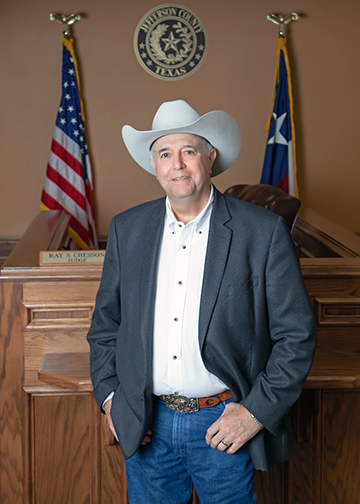 So sorry for your loss. Your family is in my prayers for comfort and healing from your grief and I am also praying for the eternal rest of Ray’s soul with God in Heaven where pain a d suffering no longer exist. Sincerely, Norma Aubey Lewis

So very sorry for the family loss of Ray, he was a very good person. God bless the Family of Ray. May he rest in peace.

Judge Chesson was an amazing man. He seemed to never meet a stranger & emanated love & kindness everywhere he went. He married my husband & I in 2004 & I am so glad he did because he made it even more special & beautiful… Thoughts & prayers to his family & to all who knew & loved him.

You are in our thoughts and prayers.

He was a wonderful man. Never a stranger to anyone. He will be missed by us all. Sending prayers to Kathy and family. From Mary Barefield and Kathy Barefield Champagine

We will definitely miss you Uncle Ray!! You are so loved and will be missed greatly!!

From everyone at Triangle Engine our thoughts
and prayers go out to the family.

Our Deepest Sympathy to Miss Kathy, Justin, and Shane. The world was a better place with Ray in it. Such a wonderful, honorable, Christian man. You were loved by many and will be missed by many. Rest Easy Our Friend. God Bless the Chesson Family.

Cathy and boys you have no idea how much this breaks my heart he was such an awesome man and and so proud to say he was my friend. Love and prayers to y’all.

A man who served his country and community with honor will be missed and forever remembered. God be with the family for comfort and peace. Judge Chesson RIP.

It was so saddening to hear of Ray’s passing. I am deeply honored to have known him, and worked with him on mutual aid calls with the fire department and EMS over the years. Ray was the type of person to bring out the best in everyone. I remember his calm manner, and sense of humor in the face of confusion and chaos on scenes. He will be greatly missed.

I knew Ray for many years. He was good man. The world was a better place with him here. My condolences to his family.

Thoughts and prayers go out to this Family at this time..I attended the Martel wedding in Nome years ago where he officiated…He was an outstanding J.P. May he rest in peace..

Our Sincere Condolences to the entire Chesson Family. We love you all so much. Ray will always be in our hearts. God Bless you.

Thinking of you all during this difficult time. Thank you Cathy Shane and Justin for sharing Ray with this community. All of you are the way Ray was. Always greet people when you see them. It runs in the family. We are here if you guys need anything. Love and prayers.

I will be praying for all of you and it hurts that I will not get another opportunity to see Ray smiling as we float down the Frio. Those prayers are ascending!

Ray was one of the finest men ever in my life. He had pride, honesty, & integrity. He married me on 10-6-2000. He’s the type of man that we aspire to be. My condolences to Kathy and his family and friends in this time of mourning. He’s with God now & no longer in pain. 🙏🙏🙏🙏

We will miss you. Love to you and your family.

Deepest Sympathy for your Family at this Time!

It was an honor to have known Ray. He treated everyone like family and always had a kind word and a hug. He will be greatly missed by so many. Prayers and healing for his family at this difficult time.
Pokie Duplantis & Eric Wilson

Love you Ray and family. A great man forever in my heart.

Our thoughts and prayers are with all of the family. Ray was a caring, friendly and Christian man. Someone you could count on and look forward to seeing. He will always be remembered for helping our community and will be greatly missed. Fly High Our friend until we all meet again.

Prayers for you Kathy and your family. Ray was a great man loved by everyone he will be missed .

He was such a great person and will be truly missed! Thoughts and prayers for Kathy and the rest of the family.

Donald and I are deeply sorry for your loss. Your family is in our thoughts and prayers! Mazie East

I am so sorry to learn of Ray’s death. He was such a beloved man in the community. My thoughts and prayers to his family.

Thoughts and prayers for all. God Bless and Keep You in this time.

Sending our profound sympathies to Ray’s family. He was a good neighbor and friend.
Skip & Sandy Mann

Cathy and boys,
My deepest sympathy at this time of loss. Words can express or help at this time. Know you are all in my prayers and it will take time to get better.

Our continued prayers for the family…let us honor him with remembrance of a life well lived.

Cathy, Our thoughts and prayers are with your family, He will be greatly missed. He was an exceptional man. We all have been blessed to have had him in our lives. Love to all.

:”Honorable” is an accurate description for Judge Ray Chesson, but not just because he is Judge. He was indeed an Honorable and Godly Man. I pray for God’s peace for your family during this difficult time. Phil 4:7
Ricky and Karen Cravy

I Kathy,Shane,Justin and family we are sad to hear about Ray. It was a true honor to have known him. He will be greatly missed by all. Our hearts and prayers are with you.
Love to all
David & Elizabeth

The loss is too great for words. Our hearts are broken! We love the Chesson family!!! Our deepest sympathy to Kathy, Shane and Justin!
Terry, Kathy and Ashley Colston

Blessings for the Chesson family. Love for all of you.

Heaven gained a very special Angel!!! My prayers and love go out to his loving family and friends.

Jay Chesson and Jan y’all are in prayers and thoughts

The world lost a great man today. Blessed to have known him. Prayers for the Chesson family.

Our thoughts and prayers are with all of the family , We Love & miss all of you ! Ray was like family to us and we will miss him so much!

You are all in our thoughts and prayers at this sad and difficult time.

God bless you all. Ray will be missed.

Prayers for all. Ray was a good Man. Will be missed.

Ike and I are praying for all of the family. We thought a lot of Ray. Prayers and more prayers for Mrs. Cathy

Thoughts and prayers for the Chesson family.

Thinking of all of you during this difficult time of loss. Love you all.