James “Jim” Frederick Speed, 75, of Sour Lake, died Monday, April 11, 2022, at Christus Southeast Texas-St. Elizabeth, Beaumont. He was born on January 25, 1947, in Beaumont. He was a 1965 graduate of South Park High School, where he played football, and holds an Associates degree in Mid-Management and a Bachelors degree in Industrial Engineering from Lamar University. He also started the Process Operations program at LIT, where he taught for a short time.

Jim was a proud Vietnam War Veteran with the United States Navy. He was a retired chemical analyst, entrepreneur, and owner and operator of JFS Real Estate LLC.

He was a 48-year member of First Baptist Church of Beaumont. He never met a stranger and he loved to talk and tell stories. Jim was a big supporter of Hardin-Jefferson athletics and local FFAs. He enjoyed his farm and family and was PawPaw to all his H-J kids.

He is preceded in death by his parents, Clarence Speed and Myrtis Apperson Speed Chandler and sisters, Wanda Klussman and Darla McDowell.

Memorial contributions may be made to the Hardin-Jefferson Athletic Booster Club, P.O. Box 641, Sour Lake, Texas 77659. 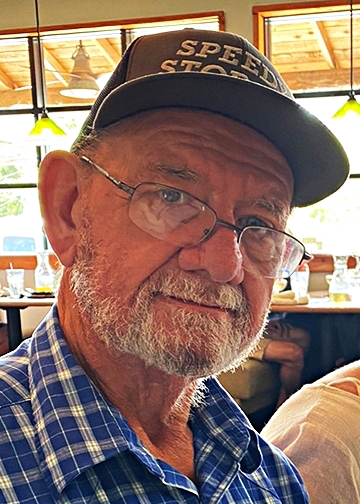 To all of you who commented, thank you so mush for your kind words. Our family is blessed to have you as friends. We still covet your prayers as we deal with this tremendous loss. We rejoice that Jim is with Jesus and we will spend eternity together. Thank you for loving us! Sincerely, Barbara Speed

We were so very sorry to hear of Jim’s passing. He worked with Dennis at Mobil and if it weren’t for Jim and Barbara, Dennis and I would have never met. Prayers to the entire family.

Dearest Barbara, Rebecca, Jonathan, David, and family, Words cannot express the sadness of our loss of Jim. He was my cousin, but we were more like siblings. He was the best husband, father, and Paw Paw to his children and grandchildren. His humor, love for family, and so many friends were only a part of who he was. We will all miss him dearly and cherish the time we had with him. You left us on Palm Sunday and were buried on Good Friday. What a magnificent arrival you made in Heaven. Rest in God’s loving arms with the love of Christ that you carried with you throughout your life.
I love you, James Frederick (Jim) Speed!!

Very sorry to hear of Jim’s passing. I new Jim from working with him at Mobil Oil. Jim always had a story to tell. God’s peace and comfort be with Barbara and all of his family. Rest In Peace Jim.

Barbara, my thought and prayers are with you and your family today. We all shared so many wonderful times together. Rest In Peace James. 🙏🙏🙏❤️❤️❤️

So sorry for your loss. While I did not know Jim I have heard some stories from David and I know he will be dearly missed. Prayers for the Speed family.

I’m so sorry to hear about Jim’s passing. Barbara and family you have all been so blessed to have Jim in your lives. We will be praying for everyone at this difficult time. God’s blessing and comfort in the days ahead.

Dear Barbara I am so sorry to hear of your loss I know it is a heartbreaking time for your family and you I also know the love and power of our Heavenly Father. He will be there to hold your hand in this journey and shower you with precious memories of times shared. God bless. Sincerely Linda Lemieux

I had an opportunity to visit with Jim at Paw Paw Charlie’s funeral last year. It sure was nice to see Jim, Barbara, and Rebecca. It has been many years since we had seen each other. We reminisced about the time they came and visited us in Bandera, Texas. They stayed at the local dude ranch and came to watch me in a rodeo. We also had a lot of fun in the swimming pool. I love you all. Be strong and Carry On. Jim would want y’all to do that.

A lot of true statements mentioned in Jim’s obit above. He sure loved to visit about anything and everything, he was one of a kind gentlemen, with lots of love for his kids, grandkids and kids of SETX. A big supporter of YMBL Livestock shows for many years. I will miss seeing him and visiting with him. Prayers for all……

Barbara, I was so sad to hear of James’ passing. We were at Bingman Elem. through SPHS together. James and I were “dates” to our first sock-hop while in MacArthur Jr. High. His Mom drove us. I thought he was so tall and handsome! I decorated the socks we were supposed to dance in, although I don’t think either James or I knew how to dance at the time! The dance was at the Alice Keith Community Center which was new in the early 1960s. It was so hot that evening that the wax on the floor got very soft and sticky and our socks stuck to it! I know you will miss him. I hope you have great memories to comfort you. Deepest sympathy. Sharon

Barbara and Family
May the special memories of Jim and God’s
Grace sustain you as you grieve his loss.
So many of our classmates have lost their spouse
Over the years and recently.
We know our life is fragile, handle with prayer and
Thanksgiving each day.
Sincere Sympathy
Ethel Prater

Jim and I grew up together as part of the Apperson clan that loved to play, sing and gather every summer. He showed up unexpectedly at my wedding in PA 50 years ago. Visited his Aunt Anne and Uncle Bill in WV with Barbara and the children and we got to introduce our spouses to the closeness of cousins. So sorry we weren’t closer in distance but he was never far from my memory.

Sorry for you loss David. You, Lori and family will be in our prayers during this difficult time.

Prayers for the family. This is such a shock. We were friends from Bingman Elementary all the way thru South Park High School. Spent many hours and days growing up together. This one really hits home and hurts. Rest in peace.