Jed was born in Beaumont, Texas December 5, 1940.  He graduated from St. Anthony’s High School in 1959 and Texas A&M University in 1963.  He served our country for two years in the U.S. Army and returned to Beaumont in 1965. Jed loved Beaumont, Texas and spent 71 of his 81 years deeply involved with the community.

When you look at Jed Dollinger’s life you see his four great loves – family, service to his community, sports and friends.

Jed Dollinger was a family man.  He married Gale Green in 1966 and their family grew with the birth of Jessica in 1969.  Jed and Gale enjoyed travel, the beach and just time at home with family. Jed and Jessica did everything from Indian Princesses to watching those Golden Gators play ball to her wedding which took place right in the Dollinger’s living room on Avenue of the Oaks.  Jed and Gale hosted holiday gatherings.  Jed was the uncle on the floor harassing his young nephews! Jed also was the Main Man taking care of his dad when his dad needed it most – it was Jed that got him to Mass every Sunday and Rotary every Wednesday.  It was also Jed who stepped in to lead Dollinger Steel Company when his brother Chick Jr. died unexpectedly. When a man’s daughter says, “My dad was a man of faith, a man of honor, a man of duty and service, a man of tradition,” you know that man has done things right.

Jed Dollinger was dedicated to serving the people and the institutions of Beaumont, Texas.  His 40-year career was with Wathen DeShong & Juncker, LLP where he became a partner in 1971.  However, Jed served Beaumont wearing many more hats than that of a CPA.  He began with the Jaycees in 1966 and expanded into the Better Business Bureau, the Southeast Texas Economic Development Foundation and the Greater Beaumont Chamber of Commerce, where he especially loved his years as a Leadership Beaumont Participant.  Jed was a third generation Rotarian where he served from 1973 to 2016. He was a part of the Beaumont A&M club for 50 years. Add in his commitment to St. Jude Thaddeus Catholic Church where he served as a Eucharistic Minister, with the Men of Jude, and on both the Parish Council and Finance Committee.  Jed didn’t just go to the meetings of these organizations; he served as a board member, a treasurer, a president or a foundation chair.

Jed Dollinger was an athlete.  From sand lot baseball, Little League, Pony League, and Teenage League to playing all three sports in high school.  (Jed was named All State Center his junior year – and that was at a height of 5’5”.)  As an adult there were ten years of Fast Pitch Softball and then there were the years and years that Jed ran!  Every morning.  Miles and miles and miles. Dozens of Fun Runs.  Four marathons.  Aggie football wrapped itself into and around his love of sports and Jed headed up to College Station for every game he could.

Most of all, Jed Dollinger was a friend.  He kept his grammar school friends – like the one that remembers getting in trouble with Sister Nicholas in second grade and still says it was Jed’s fault!  Jed delighted in his high school friends. One of those friends said he admired Jed’s determination – “Like when we played football and he was determined not to let me get up off the ground after a hard tackle.” Anther dubbed that determination Jed’s “bulldog personality.”  A third classmate remembered the morning they skipped out of school to go play in the snow. Sister Regis, the principal, just shook her head as she watched them drive away!  A fourth said Jed was the glue that kept their class together.  His freshman roommate from A&M talks about all the times they used to wrestle.  He said he had some size on Jed, but Jed had the strength on him!  Jed left his time in the Army with one friend that remained like a brother to him. Throughout Jed Dollinger’s fifty years as a business man in Beaumont he continued to make friends in every organization he worked with.  More great stories come from these years.  One friend said it was Jed that encouraged him to run a marathon, told him that “you have what it takes.”  (That friend has now run twenty marathons!)   Some talk about how good it was to work on projects with Jed.  Others mention how Jed made them laugh, and how much fun they had on trips to watch those Aggies play football.  To all those friends, to all his family, if Jed could leave you with some wise words right now, this is what he would say: Glad you got to see me!

Jed is survived by his daughter and son-in-law, Jessica and Matthew Lynn; his sister and her husband, Artie Lee (Sissy) and Herb Miller; his brother and his wife, Jerry and Jan Dollinger; his sister-in-law, Kit Gentry and a plethora of nieces and nephews and cousins.  He was predeceased by his wife of 49 years, Gale Green Dollinger; his daughter, Ashley; and his parents, Chick and Artie Dollinger.

A gathering of Mr. Dollinger’s family and friends will begin at 10:00 a.m., with a Mass of Christian Burial to be celebrated at 11:00 a.m., Thursday, July 21, 2022, at St. Jude Thaddeus Catholic Church, 6825 Gladys Avenue, Beaumont. A luncheon will follow in Culotta Hall. His graveside service will be 2:00 p.m., Thursday, at Magnolia Cemetery, 2291 Pine Street, Beaumont, under the direction of Broussard’s, 1605 North Major Drive, Beaumont.

In lieu of flowers, memorial donations can be made to The Association of Former Students of Texas A&M, 505 George Bush Drive, College Station, Texas 77840-2918. 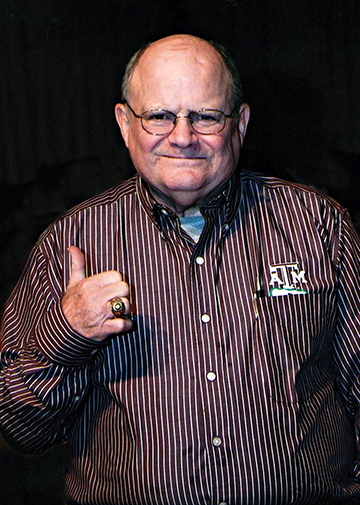 I went to school with Jed and as it ended up I moved to the little cul-de-sac where he and Gale lived. Jed could come out with some really funny things. One thing is : I sit at desk he owned, everyday. So I think of him often. Rest In Peace dear friend.

Jed was a gentleman and an asset to the CPA profession.

Jed always had a smile on his face.

We loved Jed. Such a happy, upbeat guy and we have missed him since we all moved from Beaumont. We used to kid that we saw each other most often at Broussard’s for rosaries and funerals. God must be so glad to have him home.
Mary Beth and Gerald Cloninger

It was always a pleasure to see Jed come into the barbershop,he was a true gentleman with a jolly personality . He will be missed. Gary and Darlene Hall

Ray C. mentioned our years with the Beaumont Jaycees. Memories of the several “shrimp boils” hosted by Jed’s parents will always be appreciated by many of us. Prayers for his family are offered, and for Jed to rest in peace. He was constant; as a community representative, as a family man, as a Catholic and as a friend. We will continue to miss him.

I met Jed in Sept. 1961 at A&M. We were in the same Army ROTC outfit and we lived next door to each other in the corps dorms through my freshman year. He was a junior, I was a freshman. Being both from Beaumont in later years Jed & I had many visits about our time in the corps.
He will be missed.

Rusty thank you for sharing your memories with me at the service. I will cherish the gleam in your eye and the smile on your face as you spoke so fondly of my Dad. Let’s have a coke in his memory next time we see each other.

Wonderful classmate in high school!Peace to his family and may he enjoy being with the Lord forever.

To know Jed was to love Jed! He was one of a kind! Our thoughts and prayers are with you all!

Peace be with you,
Shannon and Ed Garrod

A great man of faith, integrity, humor, and love of family and country.

He is with the Lord but will be missed.

God bless his family and friends.

Jed and I met in the JC‘s back when the Jaceys were one of the most active clubs in Beaumont throughout the years he and I spent many days talking politics we also ran I think all streets of Beaumont at one time or another I miss him so much since he moved to Houston may God bless you and repose of your soul a friend forever Ray !

Jed was such a good friend to us all. When I drove in from Silsbee to high school I would pull over in Lumberton, scoot over and make Jed drive the rest of the way. We had many good visits then. His mom and dad – all of the Dollingers were so special to me.

I have many fond memories of my dear friend Jed. We shared lots of happy times together. His family was so good to me that I always considered his mother one of my two second moms.

Jed was so precious to me! I met him back in 2005 and liked him the minute we met at a Rotary lunch when I came with Cindy Bloodsworth Jeanis . He always made me laugh and was very supportive. Jed encouraged me to be involved in Leadership Beaumont and was supportive when I left the County to work for BBB. He served on our BBB Board and was proud of my efforts in forming the ongoing partnership between BBB and the DRC mediation center. Jed never gave up on trying to get me to join the Spindletop Rotary and I’ve missed seeing him ever since he moved closer to his daughter. I will never forget Jed! Thinking of the twinkle in his eyes and his laughter will forever bring a smile and wonderful memories!

Jed was a great guy. He was a special type of guy. An asset to the Beaumont Community. I last saw him a few years ago @ our 50 yr. Reunion, St. Anthony’s. (Class of 1960. My sympathy is extended to his family.

Jerry and Jan,
We are heart broken to hear about the loss of Jed. Sad for those left behind, but rejoicing Jed is touching the hem of our Heavenly Father’s garment. Know you are loved.

May GOD grant you eternal life as a member of the family of GOD, in Heaven. I’ve known Jed since kindergarten, 1946. St. Anthony School 1947-1959. Remained friends and involved in many activities, to present times. We will miss you. May GOD bless you. Rest in Peace.

I will always remember our 75 year friendship, beginning at St Anthony, serving masses for Msgr Kelly as altar boys. I cannot forget the classroom mischief that we instigated with Andy Solleder. I enjoyed playing on the football team together as well as playing as opponents in high school due to my moving from Beaumont. I appreciate your always including me on your mailing list for class get togethers over the years. Janice and I were always happy to visit with you in Spring and take you to lunch at Jessica & Matthew’s restaurant. My heart never left Beaumont after junior high when my parents moved. We remained friends and our boyhood and adulthood memories will be in my heart forever. I plan to see you again on the very best “Playing Field.” Until then, Rest in Peace my friend, Jed.

Jed was such a precious boy and dear man. Anytime I think of the Dollinger’s I think of their great smiles and welcoming manner. We have lost another friend. May he and all the faithful departed rest In His peace.