John Lawrence Kolander, Jr., 81, of China, passed away peacefully in his home surrounded by loved ones on Tuesday, January 5, 2021.

John was introduced for the first time on October 10, 1939 by his parents Elizabeth and John Kolander. He was the oldest of four children and experienced a “tough time” at an early age.

During this period, he gained his work ethics that he was so well known for. Luckily his childhood home was walking distance to the church that he would attend for many years. This was the start of his faith that he would rely on throughout his lifetime.

In 1978, he used his determination and cowboy charm to win the heart of his brown eyed girl, Lillian Marie Carreon. The two instantly fell in love and remained happily married for 42 years.

John and Lillian became a love story that still inspires many. Together they built a foundation and raised 6 children that they not only taught how to survive but also how to live.

John had many jobs that included working for the Texas Agriculture Experimental Station and Jefferson County. After 30 years, he retired from the Jefferson County Precinct 1. During this time he gained loyal friendships that most will never experience.

Some of his best memories were made at the Golden Triangle Raceway. This quickly became his second home where he was known for the gift of operating a grader. John became an icon for this track and stayed humble as his talent remained untouched. As the news of the best track maintainer spread, he became a necessity for surrounding dirt tracks. Once he retired from this, these tracks slowly started to fade away. Speedway 90 was a huge part of John’s life that will always be a reminder for us when we pass by.

John Lawrence hunted, fished, and gardened before it became an “in thing”. He strongly believed in what he caught, killed, or grew would make a good dinner. You were never too young for his handshakes and you were always greeted with a simple salutation of him tipping his hat. John’s cowboy hat will stay a symbol of his John Wayne grit and leave an imprint in our memories. He gave everyone a nickname that some respectfully still carry. Mr. Kolander was known for fearless voice, eye contact, and comical personality. He has seen many changes from growing up without a television to watching t.v. at the palm of his hand.

John prolonged his life by cheating death on many occasions. Some of these times included rare accidents to “keeping up” with partying with the younger generation. The beginning of one of his many lives was when he became a Papaw. This gave him a chance to tell his stories, play pranks, and remain young. He immediately became a protector and inspiration for simple living when he became “Uncle John” to his nieces and nephews. He also gained extra kids that he would quickly claim as his own and was the “go to” man for them all when needing veterinarian answers to life advice. He could charmastically chat with a stranger and make an instant impact on anyone.

John Kolander never took a day off from being a true legend. His legacy will continue through his family, friends, neighbors, and community. His hobbies included hunting, fishing, gardening, making wine, and telling his unforgettable stories. He lived everyday through humor and faith.

John lived an incredible life. “Don’t quit Ole Man,” “You better not give up Dollbaby”, and “Keep going,” were his famous words because he was confident in finishing what he started and he did just that. 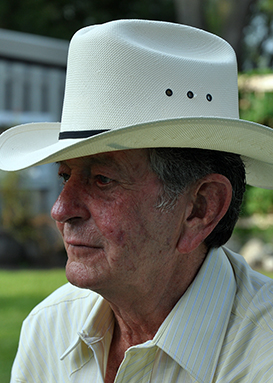 I will never forget when John and I came across a timber rattler by the race track it was at least 6 feet long we were both surprised as those cane breakers are not common in China Texas. I also remember when he beat everybody racing at Speedway 90 one Saturday night I mean everybody. When he had that gold Dodge ( I think it was a Dodge) with the police spot light we were scared to death that when he got behind us riding around we we're getting pulled over for sure...God Bless John and his precious family love Cardell and Charlie DeLeon

Glen and I both thought the world of John. He was such a gentle and kind man. He was the best on those tractors and doing the dirt work at the track.. Glen learned from the best. Our thoughts and prayers are with your family.

So sorry for your loss. John will be missed. Luckily you have many wonderful memories.

My condolences to the family of John Lawrence Kolander Jr. Expressing heartfelt sympathy and offering a prayer, that god above will comfort you and your family and ease the loss you bear..Love you all.â™¥ï¸â™¥ï¸â™¥ï¸

I remember John Lawrence fondly from the 70â€™s when my mom worked at the grocery store in Chiba. He was so kind and funny. Such a sweet man. I am so sorry for your loss.

One of the sweetest men Iâ€™ve ever known. I met John Lawrence at my husbandâ€™s deer lease many years ago. He was so kind to my kids, treating them as his own. I know he will be missed terribly by many.

John, my condolences to you and your family. Your buddy, Jonathan.

In the short time I got to know John he was a true grit guy. He made some great wine too. His gravely voice hid a humble heart and his kindness will always be remembered.

John, was one of the real deals. Always kind and greeted Us with a Smile & handshake. He Loved his family and All his family Loves him. We shared and swapped many Huntâ€™in tales big & small.. There may be a Big Space missin, but his Family & friends will never forget him. We are Praying for the heavy hearts within the Family. God bless Cliff & Dee

Our thoughts and prayers are with you all. We wonâ€™t be able to attend but will swatch on live stream. John Lawrence was a good man and leave a wonderful legacy. Judi and Ronnie

John Lawrence was truly one of the best people you could ever know. He always had a kind word and a great story to tell. Any room got much brighter when he arrived!! My thought and prayers are with his family.

May God be with your family at this time. John was always nice and I called him JR because he reminded me of JR on the show Dallas. RIP JR

Lillian, Katrina ,Stacey, Kassie My family sends our sincere condolences for your loss of your daddy Mr John. he was a very unique man with many lovable qualities I could see the love your daddy had for your momma as well as for his girl's on his face anytime I would visit with him for any amount of time . I will pray for your family to find peace in your day's to come remember your daddy legacy will live in many peoples hearts and mind for years to come he was kind and lovable much like you all . Rest in peace Mr John .

Blessed, I was to have a Brother in law like John Lawrence he was my friend and neighbor long before My Brother In Law. "Uncle John" was last of the real cowboys,. John is in the rodeo of God's Precious Hands. .I will miss with fondness our visits.

Chad, so sorry to hear of your dadâ€™s passing, prayers for you and yours

The one and only John. Never without a good story. Will be truly missed. Loved his visits looked forward each week. What a blessing to be his friend, none like him!

You all all are in our hearts and prayers.. What a fine man and a life well lived. We know his love will shine on.

John was one of the finest and most kindest people i knew i was proud to call him a friend when many years ago i remember asking himJohn what are you going to do with that young girl? his answer was im going to mary her and that he did LILLIAN he was very proud of you. he and i talked a lot about fishing and hunting he will be missed very much.

John has been a good friend for a long time and was always willing to give you advise. I always enjoyed his visits at the farm with JJ. John was the best wine maker and taster I ever knew. He was also the best grader operator I ever seen at the race track or on the roads. You will be sorely missed. Rest well old man.

We are praying for your family. May God comfort you all during this time of sorrow Theresa & Tony Myers

Mr. John was a true legend. I will always remember his stories and that laugh. Take care ol' man. We love you!

There are no words for this amazing man. Always happy and always happy to see you. Lillian and kids my heart is broken for you all. I know how much he loved you guys. I can see him and daddy right now in deep conversation. They truly loved each other. Your family really means a lot to us all. May God heal your broken hearts. Love Becky & Gene Broussard