She grew up in Southeast Texas, and after graduating high school; she took off to New Orleans for x-ray tech training at Charity Hospital. She returned to Southeast Texas and began working at Park Place Hospital where she met the love of her life, Ken Naizer. The two were married in 1977 and enjoyed many travels together, especially living in Germany for two years and traveling throughout Europe.

Jonnie retired from Park Place Hospital and became a devoted mother to her two girls, Lindsey and Lorrie. Home room mom, Girl Scout Troop Leader, CYO chaperone, and chauffeur were just a few of her titles.

As a devout Catholic, she was very active in the St. Anne’s Church and ACTS communities. Jonnie loved to travel. Sanibel Island, New Orleans, and Disney World were just a few of her favorite places to visit. Trying new foods and drinks was always a must at any destination. She enjoyed attending baseball games, especially the Houston Astros. Cardinals, nutcrackers, Hummels, aliens, music and live concerts were some of her favorite things.

Jonnie was an amazing wife, mother, sister, aunt, and friend.

Survivors include her husband, Kenneth Naizer; daughters, Lindsey Stephens and her husband, Glen, of Mont Belvieu and Lorrie Vukela-Naizer and her wife, Kristina, of Austin; sisters, Yvette Marsh of Beaumont, Jackie Benoit of Groves, GiGi Bock of Beaumont, and Jene DuBose of Lake Worth, Florida; and numerous nieces, nephews, and granddogs.

She is preceded in death by her parents and brother, Bill DuBose. 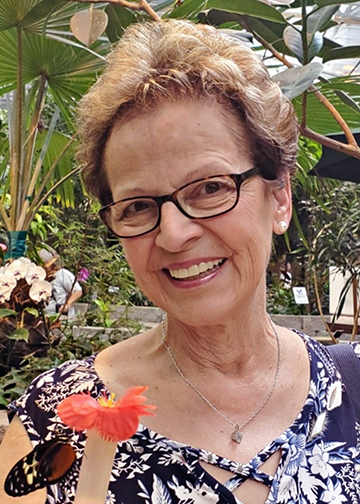 Who knew 54 years could go by so fast? Jon made me laugh a million times… except for the 7 weeks EVERY year from my birthday in June until her birthday in July.. (“You’re older than me, Mil.”) Dern girl.
I’m going to miss you, Jon. Everyday. Especially on my birthday.
I love Lindsey and MFGC and Yvette, Jackie, Gigi , Jene and sweet Bill, but you, my favorite friend, I will love forever.
54 years was not enough.

My condolences to you and the family. I remember Jonnie well from our days at St. Elizabeth, on the softball field or just being kids. She was your big sister and I looked up to her, she was always so nice to me. Love and prayers for you and the family.

I remember the first time Adele mentioned her kindergarten friend Lorrie and wanted to meet up with her at the fair. Not sure we made that happen, but from then on, Lorrie and her family have been the dearest of friends. Jonnie was always willing and able to cart the girls around and was a sweet, kind person. She took the time to attend many of the important events in our lives and it always meant so much to see that beautiful face at whatever function it happened to be. You will be sorely missed, Jonnie.

Dear Lori and family, I was deeply shocked to read of your Mother’s death. She always seemed so ready to go when we were on the pilgrimage to Lourdes and Fatima. I treasure the time spent on this very special trip. So many happy memories for all who participated with our group. May you have
Deep consolation from the time you spent with your family and the Lord. Prayers being said. I am truly sorry for your terrible loss.
Love, Peggy Green

Jonnie we can’t imagine what life will be like without you. We have loved you since we met in 2004 and have enjoyed so many wonderful times together traveling, at the lake and all the times spent together. Lindsey, Lorrie & Kenny how blessed you were to have this wonderful woman as a mom & wife. She means the world to so many. Jonnie until we meet again we’ll love you more! See you in Heaven one day.

Lindsey, my heart goes out to you and your family for the loss love your mom. I hope your happy memories will help you through this difficult time. We really bonded on our pilgrimage to Lourdes and Fatima. It was a wonderful experience. Her shining personality real live on in the hearts of many.

As a young child, I remember your vivacious and loving personality. As I’ve grown throughout the years, I appreciate your love and kindness and know that you touched my life so much for the better. Thank you for always being there for my Mom and having that special relationship and hopefully you two can be celebrating pain free in heaven together! I love you my special cousin and look forward to reuniting in heaven!

Save me a seat Jonnie!

I wish everyone who was touched by Jonnie, the peace of mind that will find us eventually. No one could have laughed, lived, and loved us more. You know she will be there for us. I’m just saying. With love . Mimi

I am shocked & extremely saddened about Jonnie.
Just found out several days ago about her illness!!!!
Two friends I know who knew Jonnie had nothing but Sweet & Great things to say about her!
Often when I would pass by the house, thought I should stop in to say Hello! Long time No See!!! My Love & Sorrow to her family. Julie Cochran

Love you more our sweet Jonnie.

Kenneth.. you always were a good friend. I was truly saddened to hear of your loss.. Cindy and my thoughts are with you and your family during this time.

My thoughts and prayers are with the family. May Jonnie Rest In Peace.
Love, Rose