Kenny Ray Smith, 79, of Winnie, died Sunday, August 16, 2020, at Christus Southeast Texas -St. Elizabeth, Beaumont. Kenny Smith was born in Beaumont, Texas, to Sam Houston and Nellie Smith. He moved to the Winnie area when he was five years old. Kenny grew up in Winnie, where he has many lifelong friends. He graduated from East Chambers High School in 1957 and joined the Navy shortly after. He served on the USS Ranger which was one of the new super carriers built in the 1950’s. He saw the world and was very proud of his service to his country.

Kenny was a pipefitter working out of Local 195. After he retired from pipefitting he worked at David Self Ford in Winnie for a number of years. Kenny always had a special love for horses and a knowledge that can’t be taught. In the mid 1980’s, Kenny and Darlene built a roping arena in their back pasture. Soon his team roping hobby became a business. It was not anything for them to run 500-1,000 teams on a weekend. Many lifelong friendships were started, and Kenny cherished those years. About 2000, a friend gave him a mare with a racing pedigree. Eventually, he gave up team roping to pursue a very successful career training and running racehorses. He truly had a talent for breeding, training, and winning. He cultivated many friendships on the racetrack. Kenny will be forever loved and missed by his many family members and friends.

A gathering of Mr. Smith’s family and friends will begin at 5:00 p.m., with his funeral service to follow at 6:00 p.m., Thursday, August 20, 2020, at the Lilton Sonnier Memorial Arena in Winnie-Stowell Park, 335 South Park Street, Winnie. His interment will follow at Fairview Cemetery, Winnie, under the direction of Broussard’s, 1605 North Major Drive, Beaumont. 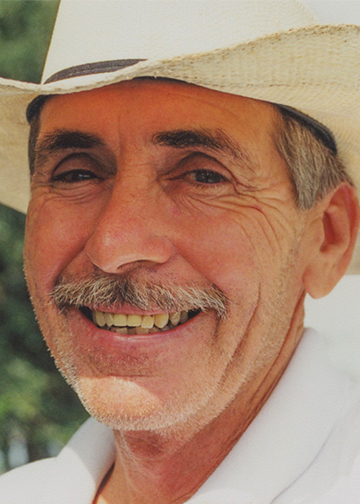 Condolences to the whole family. We were sorry to hear about the passing of Kenny. He will be truly missed. God bless you all..

Our Sincere Condolences to the Family of Kenny Smith. You Were Loved by Many, and You Will Be Missed by Many. Fly High my Friend. You're Home Now!

Great Guy. One of the friendliest men I every knew. He will be missed!

My sincere condolences to Darlene and all the family and friends on the loss of their beloved Kenny. Love and prayers for comfort .

Oh Kenny, Iâ€™m not sure why you had to leave, but I do know that you will be missed. Grateful for our friendship and sorry I didnâ€™t know you sooner. I bet if I had Iâ€™d know how to rope Happy trails cowboy. Love you.

Scott, Tiffany and Tracey so sorry about your Dad. He was one of a kind. Fly High my Friend Aubrey and Jeanette Rhame

I know he and John Taylor are swapping horse stories and enjoying heaven.. Continued prayers for Darlene and family.

I was so very very sorry to hear this bad news Darleen. You and your family continue to be in my thoughts and prayers.

Our thoughts and prayers are with family. Cleve and Neica

Please know that you are all in my thoughts and prayers. This was a good man who was loved by many. Love to all!

Sorry for your loss! We will miss â€œKenny from Winnieâ€ Boots, Kim, and Casey

Kenny from Winnie will be missed by all, condolences to all the family and friends

So sorry for your loss. Kenny never met a stranger and was kind to all. Prayers and peace for Family