Mitch enlisted in the Marine Corps at the age of 17, serving 22 years, with 2 deployments each to Korea and Okinawa, Japan. While in the Marines, he pitched for their softball team, competed in high power rifle competitions and bowling competitions, winning numerous trophies for all.

After retiring from the Marines, he moved his family to Texas where he worked for Texaco in Port Arthur for 17 years until retirement in 1990.

Mitch loved spending time with his family and friends, traveling, the Astros along with continued shooting competitions and bowling leagues through his mid 70’s. He made friends around the globe in his online chat room, who knew him as “Shooter”.

Mitch is preceded in death by his parents; grandson, Kernice Mitchell (Trey) Landry III; and 8 brothers and sisters. Mitch was the last remaining sibling out of the 9.

“Once A Marine, Always A Marine” 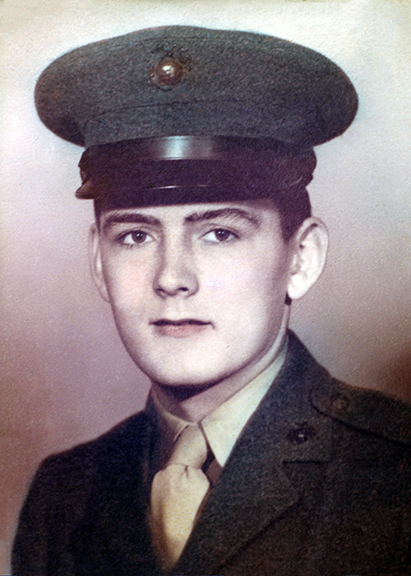 Shooterwas one of the most significant

If the Army and the Navy ever look on Heavens Scenes, They will find the streets are guarded by The United States Marines. Matthew 5:9 New International Version (NIV) Blessed are the peacemakers, for they will be called children of God.

Beryl really enjoyed talking to Shooter in the Chat Room. Sorry for your loss. Praying God's comfort to his family and friends..

We lost a good man. Very Sad Day. It was a blessing to know Mr. Landry.

I have never seen a shooter who knew his rifle as well as Kernice Landry did. He would adjust the sights and load it, all the while looking through his spotting scope at his previous shot, never once looking at his rifle - Kernice was a joy to watch when he was shooting. And he always had a joke or two ready to tell. The last words I received from him came through Charlie Cumbaa on July 2. Charlie sent me an email that if he knew it was me shooting at the 100-yard range when he drove past to shoot on the 600-yard range that he would have suggested that I join him on the 200-yard line of the 600-yard range. I replied to Charlie that I was shooting my .22 at the 100-yard range and wasnâ€™t sure that it would shoot 200 yards. He emailed me back that he had mentioned this to Kernice, and Kernice told him to tell me â€œto use your 600-yd high power zero to shoot a .22 at 200 yds.â€ Kernice was the consummate Marine Corps. rifleman to the very end. I will miss him greatly. Dorsey and I send our prayers and deepest condolences to the family.

My sincere condolences to the family.

I met Shooter online in the Marine Chat Room which later became the Semper Fi Chat Room. Met him and his wife Pat on several trips at Marine Bases and must say he was a big influence in my life since the mid "90s. I know he will be missed here on earth but will be welcome at the Golden Gate. Sir: St. Peter another Marine reporting for duty Sir. RIP Brother Marine

We lost a good friend. He had friends all over. Not only in Beaumont but Houston, Carthage, Camp Perry, Ohio, Louisiana, Mississippi,and Oak Ridge, Tennessee and he remembered everyone by name. I remember one match he brought .308 ammo but his .223 rifle so we shared my .308 rifle so after the match he told me to take my rifle to our gun smith Ken LLoyd and have him repair my mushy rear sight. My wife Norma was also one of hia friends.

I met KM at the Golden Triangle Gun Club many years ago, at least 20 or more, and enjoyed many Saturday mornings watching him beat the heck out of us average shooters. He was generous with his advice if you asked, and was never critical, especially if you didn't ask. He was proud of his service in the United State Marine Corps. Usually ready with a good joke, I still tell a couple KM tales. A true gentleman, a good friend, I will miss him.

Hello Mitch, To know you is know your dad. I hope his senior days were comfortable and he passed peacefully. I wish you and your family the best. and personally thank your dad for his many years of service in the US Marines. Take care! Gerard

I am only proud to have known this man! A lot of good memories being around him and his wonderful family. Made me really feel like I was one of theirs. Rest In Peace Good Sir!

It has been one of my lifeâ€™s greatest blessings to have known Mitch. I always enjoyed visiting with him. He always had a joke. Or some pleasantry when you saw him. â€œSemper fiâ€

Mr. Landry was such a sweet man. I would go visit him and Mrs. Pat years ago and he would talk and talk. I loved the conversations we had. He will be missed for sure.

Thoughts and prayers are with the family. Sharing in your sadness for the loss of your loved one.

Never met the Marine but talked to him many many times in the chat room. RIP Semper FI.

I met Kernice shooting highpower. He was one of the good guys, a positive influence on everyone around him. The world could use more like him.

Mitch I am so sorry about your Dad and if there is any thing I can do for you please let me know. My heart goes out to you and your family .

Terri, Dee and Mitch - How fitting that your brave Marine of a father would make his exit on Independence Day. The annual fireworks will carry even more meaning for you now that they celebrate his life. With love and sympathy for the loss of this sweet man.

I met KM at the golden triangle gun club over 25 years ago. He showed several new comers how to shoot rifles. I enjoyed his jokes and instructions. I will miss his humor and hi personality. I really hope there is a bowling alley where you are going as well as French speaking folks. You have never heard a Thibodeaux joke in French told the way he tells them! Rest Easy Mr. Landry,You were an inspiration to me and many people. Ready on The Right,Ready on The Left, Commence Firing!

Rest Easy Landry,You were an inspiration to me and many people. "Bang,Bang" we had lots of good times at work and at the Range. Sorry for your lose.

Sergeant Landry, I didn't have the pleasure of meeting you this side of Heaven, but from reading the comments of others I can tell where your son Mitch Jr got his personality and his willingness to help his fellow man and how to be a true neighbor and friend. You taught him well. I am a veteran of the USAF, but I still can say SEMPER FI Rest In Peace Sir

Kernice, I have always admired you. You are among the finest of Shooters, finest of Marines, finest of Men I've had the honor to have known. Godspeed as you PCS to MARDETPEARLYGATES.. Semper Fi.

My heart and prayers go out the the family. "Shooter" you always made the Marine Chat and Semper Fi Chat a special place to be! Semper Fidelis brother!

Pat--Please accept the sincere condolences of Vietnam Veterans of America Chapter 292 upon the loss of your husband. Your Vietnam veteran friends and family are here if you need us for anything.

Mr.landry knew me as CD. He was such a fine man. The times I visited with him were always met with a great smile and a good joke. Youâ€™ll be missed Mr. Landry. I salute you.

I grew up shooting rifle matches in Houston and Beaumont where I met Kernice. These were my formative years, and he was the best of examples for a kid like me. Always happy, always positive, always with a joke and a helluva good shot. Everyone should have such a good role model in their vicinity as I did with Kernice. Goodbye old friend; you are missed.

It was my honor to know Kernice and Pat many years ago when we were shooting high power rifle matches together. We shot many local, state, regional and national matches at Camp Perry. We shot on several Texas State Rifle Association teams together. He was a great friend and teammate. Always with helpful comments and jokes to break the tension. We stayed in those little POW huts at Camp Perry together several times. Kernice was a great rifle shooter and was especially proud of the Distinguished Rifleman's Badge (Gold Medal) that he had won (as we all were). I have many fine memories of Kernice that I will cherish. Love and strength to Pat.

I want to extend our condolences to your family from my family. We just learned of his passing. Kernice was my grandmother Annie Landry Huval's brother and my father Bernard Huval, Jr.'s uncle. Last time we saw him was for my father's funeral in January 2015. Our prayers are with your family at this time.