Live a good life and in the end, it’s not the years in the life, it’s the life in the years.- Abraham Lincoln

Just like Abe Lincoln, Larry Edgar Ellis had a happy childhood in Illinois. He was born in Clinton in 1938 and grew up as a country boy, the second son of George and Ella Ellis (nee Schluneger).

He loved outdoor life with his buddy Bill McKinnery, fishing, hunting and camping. He learned his work ethic from his father and grandparents. His dad George and his Uncle Roy owned a gas station and delivered to surrounding farms and businesses; he helped with that business and did odd jobs as a young boy and teen. Both of those men, whom he so greatly admired, were born in a covered wagon in the New Mexico territory while his grandparents were settling and proving up claims there.

Hard work was an integral part of Larry’s personality. He became an entrepreneur early in his adult life and opened a private detective business in Lincoln, Illinois. It grew to become one of the larger firms in the region and he branched out to do security for some of the area’s businesses and private policing for smaller towns in central Illinois.

An avid storyteller, Larry loved a good yarn and had many to share from his years as a detective. He was proud of having supplied supplementary security to President Gerald Ford while on the campaign trail in Illinois. He had many adventures as a private detective but sold that business to do interstate prisoner transportation with is second wife, Beverly Suttles. More tall tales resulted from these years on the road while the duo was based in Greeley, Colorado. During this time, he developed a mobile home community and was a successful mobile home salesperson.

He and Bev moved to Beaumont, Texas. He purchased three residential parks and rental units, which kept him busy in his later years.

After a brief marriage to Maggie Blackmon, Larry retired and became an avid bridge player, gaining many good friends during that time. He was also an enthusiastic football fan of the Denver Broncos and Houston Texans, and attended Lamar Cardinals games in previous years.

Larry was grateful for his grandchildren: Ellis, Grant, Kaytie and Emma. He loved his dog, Rusty.

He received excellent care from Emily (nurse), Renee (social worker) and the staff at Altus Hospice, for which the family is very grateful. Larry also had several caregivers over the past several months, and his family wishes to thank Yolanda, Michelle and the others for their kind assistance during that difficult time.

He lived a long and very full life full of adventure, with many high and low points. Larry left this life on November 6, 2022, having lived as an example of President Lincoln’s sentiments. 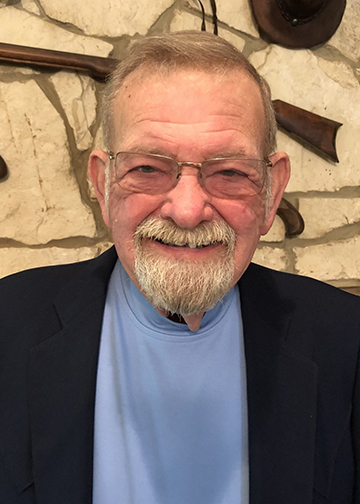 Larry was always such a pleasant, kind,respectful man and it was a pleasure knowing him and being a sometimes care giver for him.
Sending love and prayers to Rusty
and Larry’s entire family.
Lora Costa
CNA Altus Hospice