Laurie’s memories, which were so very dear to her, passed like the sands of time and slowly slipped away from her, due to Alzheimer’s, until her time passed gently in her bed. Her loyal brother, Jim, stood by her side and said a prayer.

Laurie’s birth parents loved her very much and did everything they could to get by despite their circumstances. She and her baby brother, Jim, were regretfully, but lovingly placed into foster care. When Evelyn was adopted, she was renamed Laurel. Her new home was loving. When Jim was healthy enough to join his sister, they were reunited and have been bonded ever since.

Laurie and Jim were adopted into the Perry family to loving parents, Bill and Ruth Perry.  The family lived in Cape Cod, Massachusetts and moved to Solon, Maine when she was nine years old. She graduated from Solon High School in 1968 where she was a cheerleader, honor roll student, active in debate, and the science fair. She participated in sports and bowling club, was on the student council, and was class treasurer.

After graduation, Laurie attended Hickox Secretarial School in Boston.  She was employed as a legal secretary for the US Navy District One, Boston. She began her career at Esso Eastern before it became Exxon Coal and Minerals. She held a number of positions for a number of important executives, and she was a loyal and trusted part of the workplace. She retired from ExxonMobil as an Executive Assistant with over thirty-years of service.

Laurie loved gathering with friends and family, connecting over dinner, playing board games, or laughing hysterically about ridiculous moments of silliness. She loved the Beatles, George Strait, and even Engelbert Humperdinck. She was a loyal Oprah viewer who cuddled with her cats and filled her curio cabinet with sentimental things. Her proudest treasures were the photos of her brilliant, equality minded, truth-speaking daughter.

Laurie was born one year and six days before her little brother, Jim Perry. The day she died he said she was his rock and he died nine days later.

She was preceded in death by her parents, Bill and Ruth Perry; birth parents, Robert and Alice Foley; brother, Robert Foley, Jr.; and her beloved daughter, Jen Duggan.

In lieu of flowers, memorial contributions may be made to the Alzheimer’s Association at act.alz.org; the American Society for the Prevention of Cruelty to Animals (ASPCA) at aspca.org/donate; St. Jude Children’s Research Hospital at stjude.org/donate; or to the American Foundation for Suicide Prevention at supporting.afsp.org.

May the road rise to meet you,

May the wind be always at your back,

May the sunshine warm

and the rain fall soft

and until we meet again,

May God hold you

in the hollow of his hand.

Please observe social distancing guidelines.  By attending any public event you are acknowledging the risk of exposure to the Corona Virus.  Please follow the guidelines provided by the Centers for Disease Control: cdc.gov.  Masks and hand sanitizer will be made available. 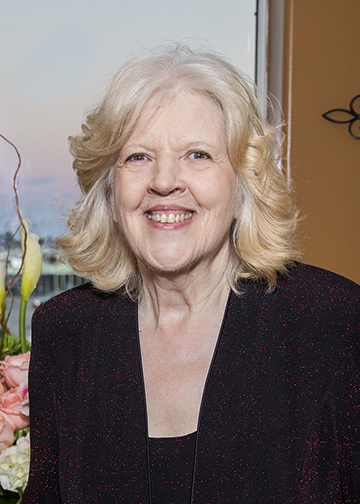