Margarita (Marja) Biatia O’Shell of Beaumont, Texas passed away peacefully on June 12, 2020. She was 89 years old.

Marja was born in Beaumont on February 17, 1931 to second generation Italian immigrants from the Sicilian region; the late “Nana” Grace Canazzaro O’Shell and “Papa” Mitchell O’Shell.  Marja was the youngest of three, and according to her (late) older sister, Annette Polite, was the most spoiled of them all. With her daddy wrapped around her finger, Marja had a lovely childhood spent with grandparents, aunts, and cousins. She grew up in a home attached to their family-owned grocery store in Beaumont while her parents worked hard to assimilate and achieve a piece of the American dream. Despite their deep pride for their Italian roots, her parents chose to not teach their children to speak Italian. Annette would say “They didn’t want us to know what they were saying or get bullied in the schools!”.  Despite her lack of fluent Italian, Marja proudly added Italian phrases to her vocabulary- not all of which have been fact checked and validated but are lovingly used anyways by her grandchildren to this day such as “Teshtadoodle” (hardheaded) and “Talia!” (don’t be obvious but look over there).

After graduating from St. Anthony High School where she was the lead baton twirler, Marja took great pride being Mama to her three children: Michael Breaux (1957- 1990), Gracelyn Breaux Miller of Beaumont, and Joseph (Joey) Breaux of Beaumont. She raised her children alongside her brother, Dr. Vincent J. O’Shell’s family and with her older sister’s company and care. Cousins were your friends to the O’Shells and Canazarros, a value she instilled in her own children. As her children grew and had families of their own, they had the constant love and support of their mother.

Marja was full of energy and life. She was involved in her church and spent her life seeking God. She read her bible daily and studied scripture, often highlighting entire pages. She joined a group, “Women Aglow”, and enjoyed traveling with lifelong friends to New Orleans, Nashville, Colorado and Florida all while sharing stories and spiritual journeys in the company of other women. Her dear friend shared that “Marja was always interesting and fun to be with. She loved God and her family.” Her family knew this to be true, too. In a letter she wrote to her granddaughter on her high school graduation she said, “Stay close to God always and hold on tight to your family”. She encouraged all of her grandchildren to develop a relationship with God and to never hesitate to use this relationship when looking for a parking spot near the entrance to Parkdale Mall. In Jesus’ name, many good spaces were found.

In her middle age, Marja met her sister, Annette, almost daily for coffee at Kroger’s Grocery or McDonald’s on Phelan where she would order eggs with a side of bacon and usually leave half on the plate. Often, Marja’s cousins, children, or grandchildren joined them, along with grocery store and restaurant employees who they came to know as friends. Her grandchildren loved hearing her generation talk: often recalling their youth and teasing each other while speaking with the greatest respect for their hard-working Daddy and Mama. These conversations were made that much sweeter by the little thimbles of coffee creamer she allowed her grandchildren to drink- A real treat!

As a grandmother, Marja was a loving “Sweet Mama” to her five teshtadoodles. She was often chosen as “My Hero” in elementary school compositions for her kindness and positive presence in her grandchildren’s lives. Her first grandchildren all received terms of endearment she claimed to have Italian roots. Jenna “Nicolina” Miller and Christopher “Piccolino” Miller, recall their grandmother’s presence with great love and admiration. They spent time at their grandmother’s house speaking in Pig Latin and pretending to have a secret language with their beloved grandmother. Her second granddaughter, Graceann “Marilina” Miller, always sought Sweet Mama’s advice as she grew and was profoundly impacted by her presence in her life. Sweet Mama absolutely adored Joey’s sons, Jonathan Breaux, or “Jon Boy” and Mitchell Breaux. She so looked forward to her days spent with them when they were younger and later watching these boys excel in sports. Sweet Mama went to any game she could and was so proud of them.

Marja always loved traveling with Gracelyn, too. As she became less physically able, she went on one more trip to NYC where she adamantly refused to use a walker or wheelchair. Impatient at the speed of her precarious steps and the stress of her navigating busy city streets, Jenna and Graceann would swoop her up and carry her between them to get around more quickly. There were tears rolling down all of their faces from the laughter they shared doing this. That was often Sweet Mama: stubborn and fanciful.

It’s the little things that seem to stand out the most: her Christmas lasagna, the crystal candy dish always filled with Chick-O-Stick and Peanut Butter Bars, falling asleep listening to her pace up and down the hallway practicing the autoharp, handmade smocked dresses, the smell of her lotion, the time spent with her on Jay Street, watching her lift weights before bed, half of a leftover donut hole, and the way she lit up with her great grandchildren. She never stopped telling her family how much she loved them. Towards the end of her life when conversation became difficult, she always managed to speak the words “I love you with all of my heart”.

Sweet Mama’s end of life care was managed by her loving children, Gracelyn and Russel Miller and Joey and Lisa Breaux. They met her declining health with unrivaled duty, grit, and loyalty. While we will always miss our Sweet Mama, we are thankful she is now with her son, Michael, and her Mama and Daddy. We thank God for her life and the impact she will make for generations to come.

She was preceded in death by her parents; son, Michael Breaux; sister, Annette Polite; and brother, Dr. Vincent J. O’Shell.

A gathering of Ms. O’Shell’s family and friends will begin at 10:00 a.m., with her funeral service to follow at 11:00 a.m., Thursday, June 18, 2020, at Broussard’s, 2000 McFaddin Avenue, Beaumont. Her interment will follow at Magnolia Cemetery, Beaumont. Please observe social distancing guidelines. 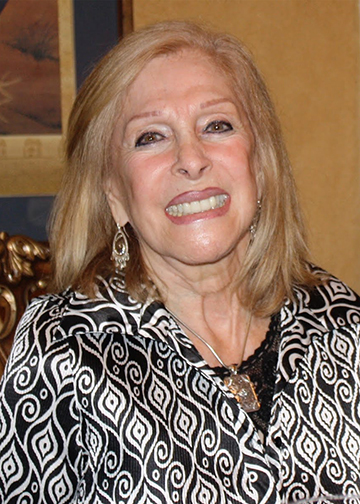 A Gathering of Ms. O'Shell's Family and Friends

A Gathering of Ms. O'Shell's Family and Friends

We loved Marja. She was such a lovely lady. Condolences to all of her family.

Marja was one of my best friends. She will always hold a special place in my heart and will never be forgotten. Prayers to all of her family and friends .

Gracelyn and family, my heart is with you. How Blessed you were to have such a sweet momma. I will remember her fondly.

Dear Gracelyn and family, Scott and I are both so very sorry for the loss of your sweet mother. I know you will miss her terribly. Much love being sent your way.

REMEMBERING Marja as the funloving schoolmate at St Anthony High School. Her performances as head drum major for the drill team were worthy of mentioning.May She rest in peace in the open arms of the Jesus she loved so much.

Marja was a wonderful neighbor to us. .She was such a beautiful, graceful lady, inside and out. Our thoughts and prayers to each of you during this time.

Gracelyn I'm so sorry for the loss of your precious sweet momma. May God give you peace knowing she's with him and she is home again after a full life on earth. Love you!

Our thoughts and prayers are with you

Beautiful woman leaving a beautiful legacy through her children and grandchildren!

Hello Texas family, Anytime I spent time with my grandmother (Rosa Polite) in Beaumont, one of the highlights was always a visit with her cousin, Marja. She was always so glamorous and joyful to be around. Sending her family my love and wishes for peace and strength in the days to come. Love, Lori Polite

My deepest condolences and loving prayers to you and your family. Gracelyn, you and I came together as friends during the trials and triumphs of our beloved Mothers In their later years. Her obituary says it all...... a life well lived and a life well loved. I can see why your devotion was so strong.... what a gem. My love to you and the family. May she Rest In Peaceâ¤ï¸

Condolences to your family. Gracelyn. Iâ€™m so glad we got to attend the Poggioreale, Sicily family reunion and learn about the origin of her family name, which is Augello but became Oâ€™Shell in America. She was such a sweet lady. Love to you and your family.

I knew Marja during Women's Aglow days. I remember taking her home oneday. Her house was so unique, as was she. Beautiful and classy. I'm sorry we didn't stay close. Peace and comfort to you the family.

Manuel and Donna Rizzotto and Family

So very sorry for the loss of your beautiful mother. Our thoughts and prayers are with you