Peggy Y’Barbo Gibson, of Chireno, age 74, died on September 27, 2020, at Houston Methodist Hospital after a short battle with leukemia.  Born in Orange, Texas on May 12, 1946, to parents Thomas and Dorothy Y’Barbo.

She is preceded in death by her parents and her granddaughter, Kenadee Williams.

After attending Forest Park High School in Beaumont, Peggy resided in Fannett for many years where she and Roy raised their daughters.  They traveled the rodeo circuit, both competing and working for the production company, and later founded a youth rodeo organization.  Peggy worked at Hamshire-Fannett High School in the Life Skills Class until the family moved to Chireno in the 90s.

In her later years, Peggy enjoyed spending time with family, sewing, working with her daughters at their pet daycare business and always found time for her grandchildren who were the lights of her life.  She attended Our Lady of Lourdes Catholic Church in Chireno.  After losing her granddaughter Kenadee in 2018, Peggy dedicated her life to sharing kindness, often donating homemade and hand-sewn gifts.  She was quite proud of her daughters’ and grandson’s accomplishments, supporting their every endeavors.

The family extends special thanks to the doctors and nurses of Houston Methodist Hospital, Dr. Bramham Reddy of Lufkin, Broussard’s Mortuary, and Jim and Hope Broussard.  In memory of Peggy, donations may be made to the Kenadee Williams Memorial Scholarship Fund at Chireno ISD to the attention of Opal Moore, P.O. Box 85, Chireno, Texas 75937. 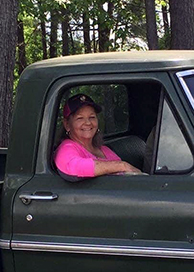 I am so sorry to hear of Peggy's death. I will continue to pray for your family. Peggy's was so much fun. I am sure she will be missed.

I'm so sorry to hear of Peggy's passing. I have so many fun memories of her and Roy. Keeping her family in my thoughts and prayers.

JT, Joni, Roy and Family we are so sorry for your loss of this amazing lady. She will be remember by many she had such a giving heart and helped many. Know when you feel the gentle breeze on your face it is Peggy. We are praying for strength in the days to come.

Miss you and love you always

This breaks my heart to hear of Miss Peggy passing. She was such a sweet lady. She once made me a day bag out of a chicken feed sack. It was soooo cute! She really had a way with her sewing and many other crafts. She will definitely be missed. My love and prayers go out to Brayden, Joanie, JT and Mr. Roy.

i will miss her so much! She was always ready to lend a helping hand to anyone that needed it. We had a lot of fun over the years ........... aweeee, that sweet smile and those funny comments.... she would have me bent over laughing..... She and her beloved, Kenadee will be together again. Thinking of ya'll with lots of hugs and love