Peter, also fondly known as Pit, PP and Big Drum Papa attended King’s Collegiate School. He received his Bachelor of Science Degree from King’s College in Halifax. He then attended Nova Scotia Technical College and received his Engineering Degree in Metallurgy. In 1955, he worked for DOSCO Steel and was transferred to Toronto, Ontario in 1962. He later worked for Tree Island Steel in British Columbia. In 1970, Peter moved his family to Georgetown, South Carolina to manage Andrews Wire Mill. His last stop was Beaumont, TX as the Superintendent of Quality Control at Georgetown Texas Steel, North Star Steel and Gerdau Ameristeel where he worked for the remainder of his career. Peter retired in 2004 at age 73, and remained as a Consultant until 2020.

Peter met the love of his life, Hazel, in 1959 at the local hardware store in Sydney. Their first date was on Valentine’s Day, and they were married on October 8, 1960. They recently celebrated their 60th wedding anniversary in 2020. Peter and Hazel shared an incredible life with four wonderful children and 6 grandchildren – the lights of his life!

A natural athlete, Peter played hockey, rugby, tennis, ping pong , chess and fencing. He served as the Captain of the Hockey and Rugby Teams in college. In later years and in order to spend more time with his children, he began fencing at age 54 and continued until the COVID pandemic.

Peter’s love of Celtic music followed him everywhere he went including his travels around the world. Peter was a member of Pipes & Drums of Southeast Texas, the Celtic Band Hazel’s Fault and attended “tune sessions” with his whistle, bass guitar and drum with friends and at B.D. Riley’s Irish Pub in Austin.

Following in his father’s footsteps, Peter was a Scout Master in Sydney, Toronto and Beaumont. He was also a member of the Irish Society, Scottish Society and a long standing member of the Wire Association. In addition, Peter drove cancer patients to Houston for treatment, and delivered Meals on Wheels twice a week until his time of death.

To us, he was known as St. Peter. He left a trail of goodwill everywhere he went and was beloved by all. His most treasured moments were those with his wife, children, grandchildren and friends. He started his day with a banana, breakfast bar and cup of coffee every morning, and much to Hazel’s dismay he enjoyed “resting his eyes” throughout the day after retirement. His favorite things included reading the funny papers, his Nanaimo Bars, Turtles and all things sweet – without ever gaining a pound!

Peter’s legacy lives on in his wife of 60 years, Hazel Power, of Beaumont and his beloved and cherished family; Daughter, Katherine Wilhelm and her husband, Tim, of Kyle; Son, Sean Power and his wife, Jami, of Maui; Daughter, Shena Power of Round Rock; Son, Conor Power and his wife, Elizabeth, of Sydney Australia and Grandchildren, Christopher Wilhelm, Shane Bradshaw, Alana Fay Power, Margaret Power, Liam Power and Daniel Power.

A COVID compliant private family Memorial Mass will be celebrated at 2:00 PM, Wednesday, February 10, 2021 at St. Jude Thaddeus Catholic Church, 6825 Gladys Ave., Beaumont under the direction of Broussard’s, 1605 North Major Drive, Beaumont. Masks are required. A Celebration of Life will be held at a later date. Services will be streamed live on Peter’s Facebook.  Please join live on Facebook or view at a later time as the service will be posted.

The family wishes to thank Harbor Home Health and Hospice for their amazing care of Peter in his final days. Donations are also encouraged to Harbor Hospice, 2450 N. Major Drive, Beaumont, TX 77713.

Peter is not gone.

He will be greatly missed by all who ever knew him

and will be in our hearts and memories forever. 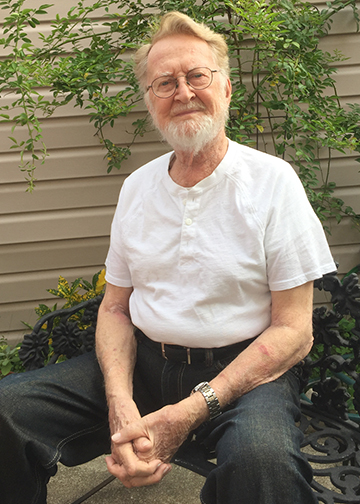 I LOVE THIS SWEET LITTLE MAN. HE WAS ALWAYS SO KIND TO EVERY ONE. HE IS OUR ANGEL. FLY HIGH PETER AND REMEMBER ALL OF AS YOU D0! WE MISS YOU ALREADY!

SUCH A SWEET PERSON. FLY HIGH PETER,. AND PLS REMEMBER US AS YOU DO!

Peter was a man of honor, intelligence, old fashion values and respect for all. He will be greatly missed.

The world has lost a joyful spirit. Iâ€™m so happy to have known him as long as I did. All of my love to Hazel and the family.

Hazel and family, please accept sincerest condolences for your loss. Pete was great person to work for and with; always so patient, kind and a an interesting teacher. You and he were both so much fun at the steel mill's functions.

My thoughts & prayers are with each and all of the Power family! I thought so very much of Mr Power when I was selling Calculators for Accurrate Business Machines! He was delightful at all times & his admiration for Gino Bisselli was a joy to watch, a wonderful friendship ! May God bless him w/ Godâ€™s Almighty Blessings w/ much peace & Joy as he begins his eternal life in Godâ€™s GloriousKingdo of Heaven RIP

I love Peter's photo and the beautifully written obituary. Peter came into my life a few years ago when I was on the staff of Nutrition and Services for Seniors working with the volunteers who delivered our meals on wheels. He delivered meals twice a week or more for ten years. I know his clients looked forward to seeing him as much as I did. Cold or hot weather,, rain or shine he enriched all our lives with his delightful loving cheerful personality. He delivered the difference in the lives of many.. I celebrate his extraordinary life of loving service and am so grateful that he and Hazel both touched my life. I shall always remember him always with much love.

So sorry doe the loss of Peter! What a nice man! God Bless You All!

Hazel and family, Our deepest condolences and prayers of comfort to you all in the loss of this dear sweet man. As a member of the B Sides Band, we were pleased to have Peter as a fan at our performances. We were truly honored to have him join us on stage at several St. Patrick's Day shows playing his Irish Bodhran. He will be missed by us all. Rest in Peace, Peter. Fly high with the angels.

My husband and I had been in a jam group with Peter for several years until COVID arrived. We always enjoyed our musical time with him and our discussions afterword with Peter and Hazel. He was a great guy, and we will miss him

may God hold you in the palm of His hand

Dear dear Hazel, I have such fond memories of you and Peter. What a great life and love you shared. May you be consoled knowing that so many are praying for the family and that all of us have happy memories of your swee man. Mary Beth Cloninger, former Volunteer Director at St. E

Hazel, so sorry to hear about your husband. Will miss his presence with you in church. Prayers for you and your family.

Hazel -- What a wonderful gentleman and scholar we had the pleasure of knowing. We will always remember the wonderful times we were able to experience with Peter. We are so sorry for your loss. Much love and prayers for you and your family. Clint & Anne Lewis

Pete will be sadly missed. He was a man of honor and a gentleman above all, with a great sense of humor to compliment. He was a great mentor to me and I will use his guidance still. Bye old friend.

My thoughts are with you all today and the weeks ahead, a wonderful video, lots of memories xx marjorie

Hazel, so sorry to learn of the death of Peter. The video was beautiful. I wish I had known him better. May he rest in Godâ€™s love.

I'm so sorry Ms Hazel! Mr Peter was the sweetest person! He will be greatly missed! You have our love and prayers!