Rev. Marvin L. Cole, 91, went peacefully to be with the Lord on September 11, 2021.  He was born on August 17, 1930, to D. E. and Aurelia Cole, in DeQuincy, Louisiana, and he held treasured memories of his childhood on Division Street with his precious sister, Melba Cole Perkins.

Bro. Cole would walk to The Pentecostal Church of DeQuincy with his grandmother, Frances Brantley, and at the age of 14, he attended a revival meeting where Sis. Nona Freeman was the evangelist. Bro. Cole received the Holy Ghost in this revival and was baptized in Jesus’ Name by his pastor, Bro. H. L. Bennett.

Shortly after this, during a Camp Meeting in DeQuincy in 1945, he received a definite call from the Lord to go into the ministry. His first revival was in Fields, Louisiana in 1946, where some 30 received the Holy Ghost.  Bro. Cole helped establish churches in Eunice, Opelousas, and Lafayette, Louisiana.

In the Spring of 1968, Bro. and Sis. Cole returned to the evangelistic field. They evangelized until October 1969, at which time he accepted the pastorate of the United Pentecostal Church of Sabine Pass Avenue (Old Glory Tabernacle) in Beaumont, upon the retirement of former pastor, Bro. Albert Debes. Bro. and Sis. Cole faithfully led the church family of The Apostolic Church in prayer and consecration for more than 36 years. Their vision for the work of God is not only local, but they traveled extensively, preaching, teaching, and ministering in many countries.

Bro. and Sis. Cole have ministered in approximately 60 countries and have experienced awesome works of the Holy Ghost while abroad. During this time, they also led The Apostolic Church in building numerous churches in foreign mission fields.

Bro. Cole retired as pastor of The Apostolic Church on May 2, 2006 and assumed the title of Pastor Emeritus.  He has continued to attend, support and lead by example The Apostolic Church and was in his final worship service on August 15, 2021, two days before his 91st birthday.

Words fail to adequately express the impact that this man has made on the lives of men and women of Southeast Texas and around the world.  From humble beginnings, he never lost the spirit of humility.  His manner was one of grace and dignity and his prayers were ones of power and praise.  He will be forever missed by The Apostolic Church and all who knew him.

He was preceded in death by his beloved wife, Marie B. Cole, and we know that she was awaiting his grand entrance into that heavenly city.

He leaves behind his son, Marvin W. Cole and daughter, Michelle Cole LaBrie and her husband, Rev. Michael G. LaBrie, his loving church family and Pastor Jason Carr and family, multitudes of brothers and sisters in Christ, their children, grandchildren and great-grandchildren that he loved as his own.

Heaven is richer.  This life has lost a prince, prophet, prayer warrior and praiser.

We will “carry bravely on” until that glad reunion day. 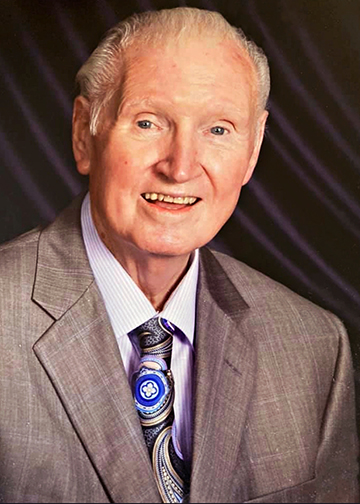 Marvin, Michelle and Michael,
I pray God’s comfort and peace over you and all who love our dear Bro Cole. He is rejoicing with Jesus and Sis Cole for eternity and we will join with them soon. It is a sure hope that we press into until that day.
“When the sun goes below the horizon he is not set; the heavens glow for a full hour after his departure. And when a great and good man sets, the sky of this world is luminous long after he is out of sight. Such a man cannot die out of this world. When he goes he leaves behind him much of himself. Being dead, he speaks.”
—Beecher

sadden to hear the news,Thank God for the life(his lil carwash buddy Chucky from Kinsels)

Michelle ,Michael. And Macon. We are sorry for your loss. Your Dad and I were raised together in DeQuincy. We also attended Bro Bennett’s church. Bro Cole was a powerful minister prayer warrior back then. Our family attended His church for many years before moving to Landmark in Pt Neches. Bro Cole was never too busy to listen to our problems. Many times he prayed for us and God healed us. Every year we exchanged Christmas cards. And kept in touch. We will never forget the love and prayers WELL DONE THY GOOD AND FAITHFUL SERVANT. Love and prayers. Charles and Lynda(Henagan)Bruns. 🙏🙏🙏. REST IN PEACE

Michelle and Mike
As You are certainly aware,your dad was very special in cardiac rehab in more ways than one, and I feel so fortunate to have known him in my life.

May he Rest In Peace

Michelle and Mike
As You are certainly aware,your dad was a legend in cardiac rehab more ways than one, and I feel so fortunate to have known him in my life.

Michelle and Mike,
I am so sorry for your loss. Bro Cole was an amazing man. I enjoyed our gumbo lunches very much and was privileged to have spent time with him. Rest in peace, my friend.
Andy & Joi D’Entremont

We have lost a true Child of God in Bro. Cole, I have known him since way back in the 1980’s, He never changed or wavered in His walk with God. He is now at Peace in his new home with Jesus! He will be greatly missed by all that knew him!

A legend among us.. And in The Throne Room of God….