More than anything, Richard was a family man. Richard dearly loved and cared for his wife, Cheryl, until her passing in 2016, and he adored his children and grandchildren more than anything. He never missed an opportunity to spend time with them and make cherished memories…whether it was a weekly lunch date, popping up unexpectedly at their house to work in the yard (which he loved to do), go to a sporting event or the countless hunting and fishing trips.

As a young man, Richard spent summers on horseback helping family members herd cattle across family lands; was a rice farmer; a honeybee keeper; and one of the first crawfish farmers in the area, before crawfish were popular.

A life-long resident of Beaumont, Richard graduated from St. Anthony’s Catholic school in 1956, where he played football as a center, was student body president and voted senior class favorite. After high school, he joined the Corp at Texas A&M University in College Station, but after only a year, being the avid outdoorsman he was, he longed for the daily bird hunting, the beauty of LaBelle marsh, and the convenient fishing trips on family lands in Jefferson County. Richard transferred to Lamar Tech (now Lamar University) and graduated in 1960 with a degree in accounting. While at Lamar he was active in the ATO Fraternity. Richard’s first job out of college was as an accountant for Texas U.S. Chemical, where in his words, he “spent five years crunching numbers in a room with no windows.” He jumped at an opportunity (if nothing more than to see more sunlight) to become Administrative Assistant to Jefferson County Judge, Chester C. Young from 1965-1969; he was then Jefferson County Treasurer from 1969-1971; Jefferson County Auditor from 1971-1977; and then he proudly served undefeated as Jefferson County Judge from 1977 to 1996. As County Judge, he won too many accolades and awards to list for various achievements, including bringing numerous businesses to the area which created many jobs, improving the water quality of the Neches River, improving the air quality in Jefferson County, and running an efficient and truthful local government. Shortly after retirement, the State of Texas named a prison after Judge LeBlanc in honor of the efforts he took to bring the prison complexes and thousands of jobs along with them to the area. The Richard P. LeBlanc Texas State Prison Unit is located along Highway 69 in Mid-Jefferson County. Upon his retirement as County Judge, he immediately took up a position running Jefferson County Drainage District No. 6 (DD6), which is one of the drainage districts created by the Texas Legislature for the flood prone areas like Jefferson County.  He is accredited for making DD6 what it is today. He managed a sophisticated flood prevention operation where he successfully acquired numerous grants that led the completion of dozens of multi-million-dollar drainage, watershed, and detention pond projects to protect thousands of Jefferson County residences, businesses, farms, and ranches from flood waters.

He finally retired for good at the age of 81 after more than 50 years in public service to his community and the State of Texas.

Judge LeBlanc was well-known for his vegetable garden with at least 70 tomato plants and dozens of cucumbers that he planted without fail, to the joy of family and friends, every Spring, and his award-winning rose bushes. He remained active as he had throughout his years with managing his family’s farm lands and their oil and gas interests.

Judge LeBlanc is preceded in death by his loving wife of 40 years, Cheryl Barrow LeBlanc, his parents, Richard P. LeBlanc, Sr. and Dorothy Flynn LeBlanc, his sister, Patsy LeBlanc Flora, and his grandmother, Nora Bordages LeBlanc, who raised him and his sister. He is survived by his loving children, daughter Danielle LeBlanc, his son Richard P. LeBlanc III and wife Carolina, their children Richard IV and Gabriela, his son Stephen LeBlanc and children Kevin, Catie and Craig Cormier, his daughter Sharon Hale and husband Joe and their children, Garrett, Jacob, and Kacie, his grandchildren Josh Broussard and Cheryse Broussard-Stokes, her husband Scott and their daughter Kennedy. He is also survived by his brother-in-law, Hugh Flora and numerous cousins whom he was very close to. 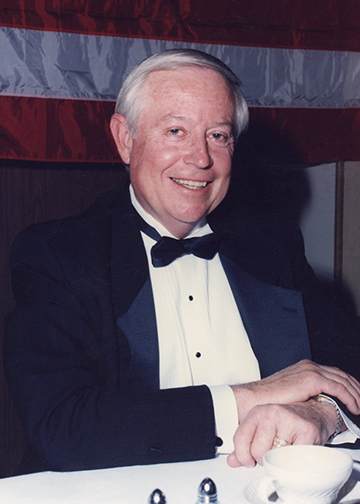 Reception for Family and Friends

Judge will be greatly missed and was a great servant of the people of Jefferson County.

When Becky first ran for public office he was a great asset for her and remained by her side during her almost 30 years of her public service. Always willing to offer advice.

Our long time friendship will always be special to us and thankful for the opportunity to have known the Judge.

Thoughts and condolences are with the family.

Judge LeBlanc was a great man and dear friend of my family for many years. We were neighbors at one time, and he served to officiate our wedding. I am proud to have known Richard, and to have been able to share that friendship with Him in his time on this earth. Rest in heavenly peace Judge. You will be greatly missed. Prayers being said for the families..

Richard was always helpful to me when I took over the Sabine Neches Navigation District. We worked together on many projects for the district, new gates, redo locks and new salt Barriers. His knowledge of the waterways and drainage systems was second to none. He, a gentlemen a man who helped and made our homeland much better. I will miss Richard.

We were so sad to learn of Cousin Richard’s passing. He was a great man, always giving to the community he loved so much. I will miss those phone calls discussing duck hunting, fishing or making duck gumbo. Our deepest sympathy goes out to Dani, Rich, Stephen and Sharon. Richard will be dearly missed by all our family. J. Michael Quirk

i remember the times with the judge with jaycee with merla breaux and others, he was a strong individual and did so much for jefferson county..

I had the privilege of working with Richard at Dd#6. Wonderful man that cherished his children and grandchildren. He will be missed by so many family, friends, and former co-workers Prayers for all of the family. Rest In Peace ‘Judge” you touched so many in your lifetime!!

Danielle, I’m so sad to hear of your dad’s passing. He was such a good, sweet man as well as an adoring father. You are a lucky young lady to have had such a great man in your life for as long as you did. Prayers for you and your family as you go through the days ahead.
Much love to you,
Tylene

Judge Leblanc was a friend of my father ‘s and a friend of the Brocato family. He was such a nice person. We will keep Judge LeBlanc in our prayers.

RIP Brother. Friends for more than 50 plus years. To much to list here ‘ll Judge you did supper well in Gods watchful Eyes.

Judge LeBlanc was a tremendous asset to Jefferson County and the State of Texas. Deepest sympathy to his family and very large circle of friends and colleagues.

I was so sorry and saddened to hear about Judge LeBlanc’s sudden passing! I have known, and worked with him, more than 25 years. I will miss him!!! My prayers to Danielle and her family as they deal with this loss!
Rusty Carlson

Oh how we will miss you Richard. Richard has always been in my life, since the day I was born. I could always depend on advice, laughter and family stories from my dear Cousin. I cannot think of the Family, without Richard, as I cannot think of Beaumont, without visiting with Richard, there. In our hearts, forever, we will be with Dani, Rich, Stephen, Sharon, and all of your precious loved ones, as your loss is mourned. We will be reminded of the fine, loving man you were, as we continue to live through amazing memories of you. Our love and prayers, Dinos, Susy Le Blanc Triantafillis & Family

I am greatly saddened to learn of the loss of my friend of so many years, Richard LeBlanc…we go back to the 1960’s….Jaycee days and friends ever since…many happy times together….I always loved visiting with him and catching up on his activities, his family and certainly acknowledging all the good he did for the citizens of our area….I have truly learned that regardless of age or condition of health, we are never ready to say BYE to those we love….My blessings and prayers are sent to each of the family at this time…
R. O.. Williams, Jr. (Austin, Texas)

May GOD accept Richard into His loving care, and grant him salvation and a eternal life as a member of the family of GOD in Heaven.
I knew Richard from our St. Anthony H. S. days. He was a few years older than me, the same age as my older brother, but would run across each other over the years. Our prayers to Richard and all of his family and loved ones. May he rest in peace.

The Judge is one of the Triangles finest men. We have lost another TRUE GENTLEMEN!!
The Roblyer Family sends our prayers!!!
God Bless
Gene

So sorry to hear about Uncle Richard’s passing! I will be there for Friday for visitations and funeral.

Richard was a great man and an exceptional County Judge. I feel privileged to have worked with him. Jefferson County is a better place to live and work because of his public service!

I am heartbroken over Richard’s sudden passing. He was my 1st cousin, but more like a big brother really. He was an amazing man, having helped so many throughout his life. He lived life to the fullest & grew the best tomatoes, grapefruit & roses. He probably shot more ducks & caught more fish in his lifetime than any other hunter or fisherman in this part of Texas! To Dani, Rich & Carolina, Stephen, Sharon & all of the children & grandchildren who loved him dearly, I am so deeply sorry for the loss of your dad & grandfather. To Hugh(& family),his brother in law who has been by his side throughout their lives, he loved you dearly as a brother.
His work ethic was one to be held high. His dry sense of humor was one for the books! He lived a full & blessed life & he will be deeply missed by all who loved him.
Becky LeBlanc Simmons

IT IS A RARE OCCURRENCE INDEED IN ONE’S LIFE TO HAVE BEEN BLESSED WITH A FAMILY MEMBER AND A TRUE FRIEND SUCH AS JUDGE RICHARD LE BLANC. HE DEDICATED HIS LIFE TO HIS FAMILY, HIS FRIENDS AND TO THOUSANDS OF CITIZENS OF THE STATE OF TEXAS. GOD SURE BROKE THE MOLD AFTER HE MADE THIS FELLA! WE LOVE YOU & WE WILL MISS YOU INTO ETERNITY. GO GET SOME DUCKS & FISH UP THERE FOR ALL OF US.
ERWIN J. LE BLANC JR. & FAMILY

I am so sorry to hear of Judge Leblanc’s passing. Stephen and family my prayers and love always.