Robert Herman Bennett, 89, of Midland and formerly of Silsbee, died Wednesday, September 23, 2020.  He was born on January 31, 1931, in Hicksbaugh TX, to Laura Murk Bennett and Leon Burton Bennett.  Mr. Bennett was a career Air Force NCO. He served his country in the Korean and Vietnam Wars. After retiring from the military, he had a second career with the Federal Aviation Administration retiring again after twenty years of service.

He was known by many names by many people such as Robert, Bob, Bobby, Herman, Hammer, Uncle Herman, Dad, Pops, Daddy, G-Paw, and Mr. Bennett.  One of his greatest joys was building his own home from the ground up in Silsbee, Texas.  He also built a beautiful red barn next to it.  Bob and his beloved wife Jan enjoyed twenty-four years living in this home. Bob was known for being able to build things and tinker in his shop.  He loved volunteering at the Care Center as a handyman.  He told stories of fixing things in elderly people’s home such as refrigerators, ramps, sinks, etc. He did this work happily for banana pudding, cobbler or a piece of cake.

His survivors include his children, David Keith Bennett of Leander, Texas; Kathy Robinson and her husband, Price, of Midland, Texas;  and Roy Dean Bennett of Springfield, Missouri; grandchildren, Trey Robinson of McKinney, Texas and Brittany Paige (who Bob named) of Addison, Texas; and siblings, Margaret Haralson of Spurger and Virginia Sikes of Dallas.  He considered Nancy Haden one of his own kids, as she grew up as part of his family for many years. His brother-in-law, Kenny Cudd, was a part of his family as well because he was always there no matter where the family lived. He is also survived by many nieces and nephews that he loved.  He is preceded in death by his parents; wife, Janice Cudd Bennett; brother, L.D. Bennett; and sisters, Hazel Farrill and Annette Comeaux. 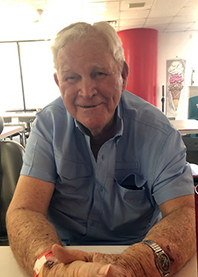 I knew Bob from the FAA over at IAH in Houston from the 1970's when he worked with the Field Maintenance Party. I left the FAA in 1979 and moved back home to Buna. I rejoined the FAA in 1990 at the Jefferson County Airport....and there was Bob again. Learned a lot from him. He always knew the best way to get the job done. Always friendly to everyone, and that was a GOOD thing because he was a very stout fellow. For several years after he had retired, I found myself having to get a cheater bar to loosen something that he had tightened. He and I both shared the enjoyment of having built our homes with our own hands, and were always comparing how we did it. He was one of the people that you could learn from if you would just listen. Always enjoyed his story-telling because he had so many memories to share. Really going to miss him. I hope that when my time comes, I can be half the man that he was.

Mr. Bennett was a beloved neighbor for many years. Iâ€™ll be praying for the family and friends.

To Bob's Family, I am praying for you as you go through this time together. Just remember that he loved each of you. Treasure your memories. Bob's friend, Sue