Rosine McFaddin Wilson, the daughter of James Lewis Caldwell McFaddin and Rosine Blount McFaddin was born in Beaumont Texas on June 27, 1927. Mrs. Wilson died on October 19, 2022, after a brief illness. A fifth generation Texan, she was descended from two signers of the Texas Declaration of Independence, Charles Stanfield Taylor and Stephen William Blount, and two veterans of the Battle of San Jacinto, William McFaddin and Stephen William Blount. Her great-great grandparents, James and Elizabeth McFaddin and Hezekiah and Nancy Williams were among the first settlers in what is now Jefferson County but was then part of Mexico. Her grandparents were Eugene Harmon Blount, a former Texas legislator, and Rosine Shindler Blount of Nacogdoches and William Perry Herring McFaddin and Ida Caldwell McFaddin of Beaumont. She was a Mayflower descendant on her mother’s side and First Family of Virginia with a colonial governor of Virginia as an ancestor on her father’s side.

She returned to Beaumont and was employed by the First National Bank where she met William Epps Wilson. They were married in 1951 and had two children, Rosine Blount Wilson, who married James M. Hall, and William Epps Wilson, Jr., who married Leslie Donnelly. Their grandchildren are Patrick M. Hall, Rebecca Lane Wilson, Rachel Leslie Wilson, and William McFaddin Wilson.

Rosine was a member of many civic organizations and generously gave of her time as a volunteer. She was recognized locally, regionally, and nationally for her passion and tireless support for historic preservation and for the arts. She was a member of the Junior League of Beaumont, serving as president. She was an assistant den mother for her son in Cub Scouts and a Blue Bird leader for her daughter. She served as chairman of the Jefferson County Historical Commission, as vice chairman of the Texas Historical Commission and as president of the Texas Historical Foundation. She was chairman of the Trustees Council of the Texas Association of Museums, vice chairman of the Lone Star Historical Drama of Galveston when it was first founded, and a member of the Board of Trustees of the San Jacinto Museum of History. She has served as a trustee of the Lamar University Foundation and as a member of the Regents’ Advisory Committee. Rosine was president of the board of trustees of the McFaddin-Ward House Museum and a trustee of the Mamie McFaddin Ward Heritage Foundation. She was a member of the Magnolia Garden Club, having served as vice president, and had been a recipient of two Garden Club of America preservation awards and several Magnolia Garden Club awards. She had been president of the Beaumont Heritage Society and served for five years as the first director of the John Jay French Museum. She also served on the boards of the Spindletop Museum and its successor The Texas Energy Museum. She was appointed by President Jimmy Carter to the Advisory Board of the Kennedy Center in Washington, D.C.

She received a lifetime preservation award from the Beaumont Heritage Society and Volunteer of the Year for the Arts award from the Southeast Texas Arts Council. She twice received the Outstanding Trustee Award from the Texas Association of Museums. She wrote several historical articles for newspapers and magazines as well as for the Texas Gulf Historical Record and the East Texas Historical Journal. Rosine was co-author of a book entitled The First Quarter Century.

Her chief pleasures in life were her children and grandchildren, her church, St. Mark’s Episcopal Church, especially the choir and St. Hilda’s Guild, her travels to over 100 countries, her bridge games, and her many dear friends who were there for her when she needed them. May God bless them all. Her family would also like to thank caregivers Linda Patterson, Sheila Faulk, Albina Liebe, Susan Hernandez, Patricia Mikel, Nancy Alvarado, and her long-time aide Mary Acclis for their patient and kind care.

A gathering of Mrs. Wilson’s family and friends will be from 5:00 p.m. until 7:00 p.m., Wednesday, October 26, 2022, at Broussard’s, 2000 McFaddin Avenue, Beaumont. Following a family committal in Magnolia Cemetery, Beaumont, a memorial service for Mrs. Wilson will be 11:00 a.m., Thursday, October 27, 2022, at St. Mark’s Episcopal Church, 680 Calder Avenue, Beaumont. Please join the family immediately after the service in the cloister for the reception. 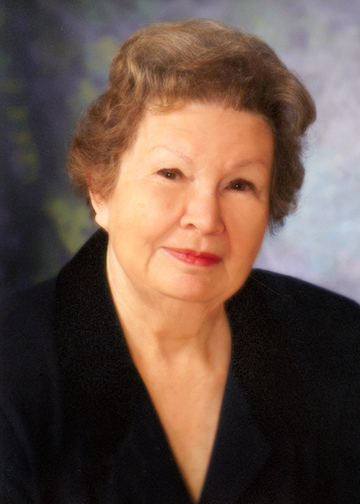 Also sending much love and prayers.

So sorry for this loss. I appreciate all the support Rosine always gave me as my museum career was underway. I treasure my time work at McFaddin-Ward House Museum in those early days!! Beaumont’s museum, history and historic preservation community will surely be missing such a wonderful volunteer and driving force which saved so many historic gems. Sending prayers that you will find peace to the entire family.
With much sympathy,
Rebecca Woodland

We were saddened to learn that Rosine passed away. She was a great lady who contributed so very much to our community. She will be sorely missed.
We send our deepest sympathy.
Mary and Rebecca Woodland

I loved being in the choir with Rosine. She had a beautiful voice. I know everyone will miss her magnificent presence and we used to love to walk by her garden in the morning! It was the highlight of our neighborhood walks. God bless all of her family.

We send love and prayers to the family.

Our thoughts and prayers are with you and your family.

Sending prayers to all the family in the loss of this amazing woman. She is certainly a testament to a life lived well and has left a wonderful legacy.