Roy Burkett, 81, passed away surrounded by family on July 1, 2021, at Memory Care Center in New Braunfels, Texas. Roy, or more affectionately known as PawPaw, was born October 27, 1939, in Bon Weir, Texas, to Charlton and Calla Burkett. Roy enjoyed growing up alongside his 4 siblings, Linda, Loyce, Connie, and Donald.

After graduating from Beaumont High School in 1958, Roy joined the United States Air Force and where he proudly served the US from April 1959- January 1963. Roy carried this passion for aircraft and flying for the rest of his life. He would eventually become a member of the Experimental Aircraft Society where he attended as many “fly-ins” as he could. In 1973, Roy started construction on a Skybolt Airplane (which will have more land miles than it ever will air miles as it traveled with the family across the globe).

In 1964, Roy married Mickie and welcomed his daughter, Rhonda, into the world. He also attended and graduated with a Mechanical Engineering Degree from Lamar Technology. Roy and the family moved to Houston where he took a job with Reading and Bates. In 1974, shortly after having made the move to Houston, Roy’s intelligence blended with exceptional work ethic allowed the family the opportunity to relocate to Singapore where he served as a Construction Project Manager. With the completion of this project, the family was relocated to Brownsville to oversee another rig construction project. After an 18th month stint in South Texas, the family moved back to Singapore. Other locations Roy’s work allowed the family to live and enjoy included Malta, South Africa, and Argentina. Roy became self-employed in 1985, serving as a consultant on various rig construction projects. In 2014, Roy retired and enjoyed “flying” down the open roads on his Harley Davidsons and working on his airplane. It’s an understatement to say that Roy loved his Harleys. He was the proud owner of 3 of them throughout his lifetime.

Unfortunately, Roy was diagnosed with Alzheimer’s in 2014. He fought the disease with the same tenacity and determination he tackled everything in life with. His last years were spent in Seguin, Texas, enjoying time with his daughter and her family.

Roy is preceded in death by his parents, Charlton and Calla Burkett.

A gathering of Mr. Burkett’s family and friends will begin at 10:00 a.m., with his funeral service to follow at 11:00 a.m., Tuesday, July 6, 2021, at Broussard’s, 1605 North Major Drive, Beaumont. His interment will follow at Forest Lawn Memorial Park, Beaumont.

Memorial contributions may be made to the Alzheimer’s Association, 6055 South Loop East, Houston, Texas 77087. 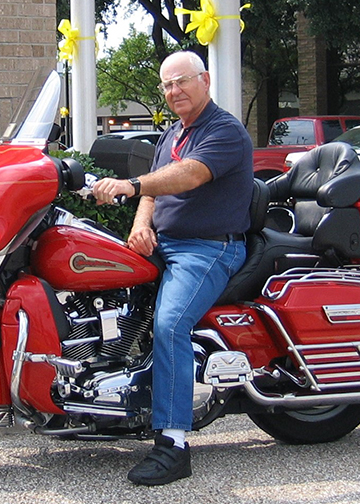 My thoughts and prayers are with family at this very sad time. Please draw strength knowing he is with our Fathe in heaven, And, as Rhonda said, he’s probably telling Saint Peter to rehang the pearly gate.

Much love and prayer coming your way

So sad to hear of Roy’s passing, he was a member of our local EAA Chapter, 1515 in Kountze Texas. He was very talented and smart too. He invited the whole club to their house in Vidor to see his SkyBolt and to see his shop. Our thoughts and prayers go out for his family.

The Cowboy HOG Chapter 4974 offers their deepest sympathy to Roy's family. He was an active member for many years. Prayers for the family. May Roy enjoy the Harley Heavenly Highway.

Mickie, Rhonda and family - know you are on my mind and in my prayers. Thankful God remains as close as the mere mention of His name! Love to all!

My sweet friend Mickie, I’m sending you prayers and all of my love. I wish I could be there. Love you very much Kathie

Mickie, you are in my thoughts and prayers, during this difficult time.

Mickie, I am so sorry to hear of Roy's passing. I dont know if you remember me, but I worked with you & Linda @ First Federal Savings & Loan in 1973. I remember having my first ever airplane ride with Roy. We flew over Beaumont, it was so exciting for me. When I got married & you moved to Houston. You rented your house in Vidor to me. The last time I saw you, you were visiting your brother Randy @ the dialysis clinic. I have very fond memories of working with you & Linda. May God give you comfort & peace today & in the days to come. Love you Loujene

Dear Mickie, Rhonda, Linda, Loyce, Connie, Donald and family, Please accept my condolences at the sad news of cousin Roy's death. He was the smart one in the family and seemed to be so exotic to me when I was a child as he traveled the globe. Mother was always so pleased in later years when he would come roaring up on that Harley for one of his surprise visits. I'm so sorry I couldn't find any coverage for my hospital shifts so I could be with you tomorrow. We know what a greeting he received when he went home and I am sure they are all gathered around him now. May God's peace and comfort be with you and may his soul rest in peace. Love ya'll, Susan

Roy, thanks for the good times and trips we took together.