Charles Louis Saunders (Sonny Boy) lost his life on December 7, 1941, but his miraculous journey to return to Texas has continued.

Sonny Boy was born to Mortimer Alvin and Melina Falke Saunders on October 16, 1923. He was a very caring, kind, and playful child growing up. In fact, his desire to join the navy just one month after his seventeenth birthday on November 23, 1940, exuberates these characteristics. He had a desire to serve his country but an even greater desire to help his family.

Times were difficult growing up as Mortimer Alvin (Sonny Boy’s father) worked in construction and in the rice fields to support his family while Melina (Sonny Boy’s mother) raised children.

Sonny Boy’s strong compassion for giving to others is remembered in a story told by his younger sister Anna Belle. He would do without so she could have shoes to make the daily walk to school. He could not bear to see his little sister struggle in any manner.

He was playful with his younger brother (Mortimer Virgil) as he fooled him into believing his belly button was a scar from being shot in the belly with an arrow.

Sonny Boy served as a Seaman, Second Class on the USS Oklahoma at Pearl Harbor on Ford Island in Hawaii. He was one of 429 sailors and marines who were killed when the USS Oklahoma was moored in the December 7 attack by Japanese forces.

There were 390 servicemen, including Sonny Boy, recovered from the ship by divers and salvaging crews as the USS Oklahoma was prepared for righting and was refloated. This salvaging occurred from July 15, 1942 through May 10, 1944. They were initially buried at the Halawa and Nu’uanu Cemetaries. In September 1947, the American Graves Registration Service disinterred the original burial sites and moved the remains to the Schofield Barracks Central Identification Laboratory in efforts to confirm identifications and return these men to their families. Congress and veteran organizations placed a great deal of pressure on the military in 1947 to find a permanent burial site. That permanent burial site was at the National Memorial Cemetery of the Pacific also known as the Punchbowl and the first interment was made on January 4, 1949. The 390 unknown members of the USS Oklahoma were buried in 61 caskets in 45 mass grave locations.

At the time of Sonny Boy’s death his brother Buddy was serving in the army and was stationed at Camp Beauregard, Louisiana. He had enlisted at age 28 in July 1941, just months before Sonny Boy’s death.

Medals and ribbons are awarded to servicemen who give their life during their service. Sonny Boy was awarded a Purple Heart for Military Merit and three ribbons for American Defense, American Campaign, and Asiatic Pacific Campaign.

These awards were almost a lost memory. After the funeral of Melina Falke Saunders (Sonny Boy’s mother) family members were cleaning out the family home preparing items for an auction. Someone happened to open a sewing machine where an old dusty box was found. In the box were Sonny Boy’s awards.

Anna Belle, the last living sibling of Sonny Boy, had a strong passion for bringing her brother home and laying him to rest at the gravesite their parents prepared for him at the Fairview Cemetery in Winnie, Texas. Records indicate Mortimer Alvin (Sonny Boy’s father) ordered Sonny Boy’s headstone on September 30, 1964.

Up until the last day of her life (July 19, 2019), Anna Belle (Sonny Boy’s sister) never lost hope that her brother would be brought back home to Texas. It was written in her obituary that her advocacy to bring her brother home after all these years will be continued by all who survive her.

This passion became reality in 2015 when a niece (Neica Franklin Bertrand) of Sonny Boy’s was contacted by the Defense POW/MIA Accounting Agency (DPAA). They had tracked her down through her mother’s death records (Lillie Mae Saunders Franklin). In 2015 the DPAA was given authorization to exhume the unknown remains of the servicemen associated with the USS Oklahoma and reexamine them using advanced forensic technology.

It was at that point the military connected with Anna Belle. She worked tirelessly with them by gathering and providing DNA of family members to make a positive identity of Sonny Boy’s remains. She attended the Family Update provided by the DPAA in Denver, Colorado on May 16, 2015, and continued frequent contact as the efforts continued. She always felt a responsibility for Sonny Boy’s death because of his desire to make life better for his parents and younger siblings during their hard times and enlisted to make this happen.

Sonny Boy’s service and death are memorialized in several locations. His name is on the Walls of the Missing at the Punchbowl where a rosette will be placed next to his name to indicate his remains have been identified.

The USS Oklahoma Memorial, dedicated on December 7, 2007, on Ford Island in Pearl Harbor is next to the former birth of the USS Oklahoma. The memorial’s black granite walls suggest the once formidable hull of the ship. Each member has a white marble standard engraved with their name that symbolizes an individual in pristine white dress uniform, inspired from the naval tradition of “manning the rails”.

A granite wall listing the crew on the USS Oklahoma and an anchor from the ship are displayed in Oklahoma City, Oklahoma as a tribute to those who perished when the ship capsized.

Sonny Boy’s journey began with a dedication to his family and his country. His family is sure that his service included laughter and adventure and for that we are thankful. It is more than likely he perished while helping others. But most of all we, the many nieces and nephews, of this genuine hero are grateful to welcome him back to Texas on December 7, 2021, eighty years after his death where he will be buried next to his parents.

Sonny Boy’s arrival will be welcomed by many family members and friends. Sonny Boy’s nieces and nephews welcoming him home include the following: 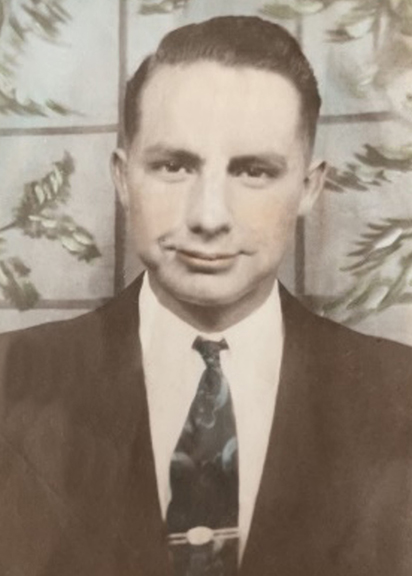 Thank You for your service , God rest your soul..

As the nephew of a sailor who died on the USS Oklahoma on December 7, 1941 (Coxswain Layton T. Banks), welcome home sailor. A too-long journey, with a final placement at home. I hope to attend the service on the 7th. Bravo Zulu!

Welcome home Hero. Thank the family members that never gave up on bring you back.

At some point in all of our educational studies, we have all studied, read or heard about Pearl Harbor, but none of us from the the Winnie Stowell area or East Chambers ISD would have ever thought we were reading, studying and testing on someone from our very own community. I am happy that the family now has closure and hopefully , he may Rest In Peace next to his patents. This is a sign in never giving up, no matter the obstacles you are faced with.

A beautiful and fitting tribute. Prayers for your family.

Thank you, sir, for your service to our great country. You are a true hero. Welcome home.

Thank you for your ultimate sacrifice. So glad you will be honored.

Our sincere prayers to all his family. He has always been home with the Lord,but this is the families reward for their diligence in never forgetting the price he paid for us. We have an uncle (Eugene Mott) who is still KIA/MIA from WW2. We know your pain and rejoice in Sonny’s homecoming…

This has made my heart smile! So happy that you are able to bring your loved one home!! May God bless you dearly!!!

Such a fitting tribute for one of our many Veterans who was killed at Pearl Harbor. I’m so glad he was finally identified and brought home. I do hope the same is done for more of our unidentified servicemen. Thank you for your service, Seaman Saunders! May you rest in peace now and forevermore.

As I read this, I remember a Mr. Saunders who lived in Stowell who had a little grocery store. His son Jaime was a good friend and worked with Donald, my husband. I also knew Virgil, his wife Betty and their children Jackie and Karen. It does my heart good to know their relative will be back home after so many years.

My condolences to the family who have now have at home.

As a Viet Nam Air Force I praying for your family.

I will be thinking for you, so close on “Armistice Day”, now Veterans Day.

My heart is crying after reading this. I’m sending prayers for this hero’s family! There are no words to explain how grateful I am for his and others sacrifice!!! I have been on the USS Arizona memorial in 1971. Ig was the most moving place I have ever been. God bless all of Sonny Boy’s family as they bring their hero home!!!