Steve Evans died peacefully on April 1, 2021 at Brookdale Lakeway. He was 77. Steve was born in Los Angeles on April 8, 1943 to Donna Wells Evans and Orville Dutton Evans. Steve was raised singly by his mother until she married Richard Newell when Steve was 14. Growing up in Los Angeles in the ‘50s presented an interesting mix of experiences including running carnivals for company events under the watchful eye of his boss and mentor, Fred Hertwig, and multiple appearances on “The Betty White Show.”

At a very early age, Steve developed an interest in nature, gardening and design and began designing and installing the landscapes of his neighbors, friends and relatives. Steve loved to sing and in high school was in the choir as well as on the basketball team. He was also a competitive diver and pole vaulter. Steve worked his way through college and received his Bachelor of Science in Landscape Architecture from California State Polytechnic University in Pomona.

In 1969, Steve joined the Peace Corps and was assigned to Iran. His group was housed in chicken coops at Fresno State University to acclimate them to Iran’s triple-digit temperatures. With Steve’s planning experience, he shifted from the initial assignment of teaching sugar beet culture to the Planning Department for the City of Tehran that was tasked with redesigning small villages throughout Iran. During this time, Steve designed and oversaw construction of a national park in the City of Shiraz. After completing his Peace Corps duties, he consulted privately for then-Crown Prince Shahram Pahlavi and Queen Farah on their residences, and oversaw the restoration of the gardens of Naranjastan, a late 19th century palace in Shiraz.

After hitchhiking all over the Middle East and Europe, Steve returned to the States and earned his graduate degree in Landscape Architecture, also at Cal Poly Pomona. He then taught in the landscape architecture departments at Cal Poly San Luis Obispo and at Texas A&M University where he met his wife, Katherine Sanders, also in landscape architecture. They married in 1981 and began their lives together in Houston, soon forming their own firm, Evans Associates, for land planning and landscape architecture. They practiced side by side for over 25 years – from Houston to the Bay Area where they joyfully welcomed their son – then later to New Zealand. Upon returning to Texas, Steve enjoyed his home and new friends with his family in Wimberley.

Steve dearly loved his wife and his son, Caelan. He was adventuresome, spontaneous, stubborn, optimistic, kind, creative, silly and fun. Steve got great satisfaction in creating places of beauty and harmony for the enjoyment of people.

He has already been sorely missed and will continue to be missed. Not only will he be remembered with love by Katherine and Caelan, but also by his mother-in-law, Christine Moor Sanders; sister-in-law, Christine Sanders Juckett; and cousins, Mike and Michelle Grant, Kathy Wells, Ezra and Amrita Moor, and Crisler and Yoko Moor. Steve’s family wants to express deep gratitude to the Brookdale Lakeway community of Hospice, staff and administrators for their compassionate care of Steve, especially Yensi, Armistead, Rosa, Holly, Mari, Laura, Bianca and Claudia.

It is said that someone with dementia dies twice. So goodbye again, my love. You are now free.

Interment of Steve’s ashes will take place privately at Magnolia Cemetery in Beaumont, Texas. A gathering for friends and family to share stories will take place at a later date. In lieu of flowers, please consider a contribution to Hospice at hospicefoundation.org/donate or Alzheimer’s Association at act.alz.org or a local charity that is meaningful to you. 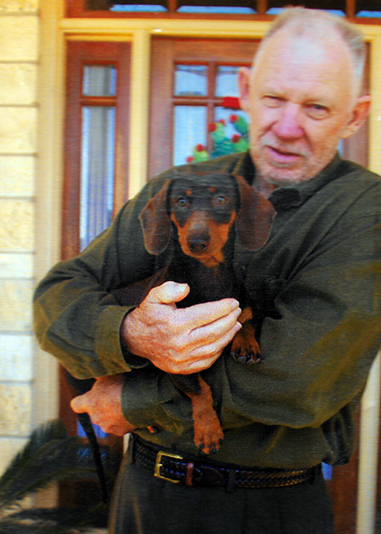