Ted Reed Delahoussaye, 54, of Port Neches, died July 9, 2021, at Harbor Hospice of Beaumont after a short battle with cancer. He was born in Houston, Texas on July 1, 1967. He resided in Nederland, Texas with his loving parents, Peggy Ann Borel Delahoussaye and Donald Anthony Delahoussaye, for most of his life.

Ted was an independent soul from the day he was born and followed that path until October 2007 when his son, Trent, was born. At this point Ted’s sole focus was the wellbeing of his son. Ted’s path in life became a more conventional one but with his son at his side he never looked back or regretted this choice. Following this path, he began a new career and realized early success, but he was not able to see his new life to its proper end.

Ted is survived by his mother, Peggy Delahoussaye; son, Trent Delahoussaye, both of Port Neches; brother, Jay Delahoussaye and his wife and daughter, Janaína Marques and Cristine Eduarda, of Goiânia, Brazil; as well as many aunts, uncles, cousins, and extended family members.

He is preceded in death by his father, Donald Anthony Delahoussaye.

A gathering of Mr. Delahoussaye’s family and friends will begin at 11:00 a.m., with his memorial service at 12:00 p.m., Saturday, August 14, 2021, at Broussard’s, 505 North 12th Street, Nederland. His cremation arrangements were handled through Broussard’s Crematorium, Beaumont.

In lieu of flowers, memorial contributions may be made to St. Jude Children’s Research Hospital, 501 St. Jude Place, Memphis, Tennessee 38105. 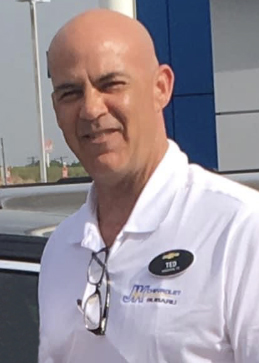 Thoughts and prayers are with Jay, Peggy and the whole Delahoussaye family. So sorry for your loss. It was a treasure to know Ted over the years and a treat to spend time with Ted & Trent. Jay - you have been a great brother to Ted and super uncle with Trent. Always here if you need anything. Love Always - Jim

My condolences are with the family. Ted was such a great spirit he actually sold me my first car such a great and funny man. I named my car Dela after his last name.

So sorry to hear the loss of our friends Ted.. I know you were such a great dad and that made me so happy. You will be missed my friend !! Love and miss you!! Prayers for you and you r family!!

So sorry to hear about Ted having cancer and passing away. My thoughts and and prayers are with you Peggy and Jay

So sorry to hear of Ted’s passing. We were customers of Teds and he was an awesome guy. His family is in our thoughts and prayers.

Heard about your illness and I am so sorry to see you go. Rest In Peace Jesus. Loves you

Thoughts and Prayers to the family. I was able to reconnect with Ted a few years back and enjoyed our talks together.. Sorry for your loss and sorrow at this time. Love, Johnny