Reverend Byron Crocker of Silsbee, formerly of Beaumont, died January 2, 2020 peacefully at his ranch with his wife Terry by his side.

Byron was born December 8, 1935 in Newton, Kansas, to Mason and Florabel Crocker.  He had an older sister, Rita whom he loved very much.  In the 40’s, the Crocker’s, a ranching family, moved to Brady, Texas, to take on larger ranching endeavors.  Byron attended Brady High School and went on to Culver Military Academy where he graduated.  Despite his father’s wishes that he attend Texas A&M; Byron had enough of military school and wanted to be around girls, so he joined his sister at the University of Texas, majoring in English literature.  At the University, Byron made many friends, belonged to Phi Delta Theta fraternity and was involved with the Episcopal Church on campus.

During his senior year, he met Ann Duggan and they married when he graduated.  After spending summers and holidays working on his Dad’s ranch, Byron was ready to take on a full-time ranching career.  He and Ann set out for the beautiful Flint Hills of Kansas to begin life on the ranches that had been in the Crocker family since the War Between the States.

During their time on the ranch, Byron and Ann had two wonderful sons.  Mason Lee in 1958 and Thomas Byron in 1961.  After six happy years on the ranch, Byron said yes to the persistent tap on the shoulder from God and decided to herd sheep rather than cattle.

In 1963, Byron enrolled at the Episcopal Theological Seminary in Berkeley, California.  This was quite a culture shock for the young ranching family, but they found a warm and loving community there and formed many wonderful friendships.

Byron’s first assignment was to the Episcopal Church in Brownsville, Texas, where he stayed for two years.  From there, he went on to St. Mark’s Episcopal Church in San Antonio where he served for three years.  He and Ann made dear friends everywhere they went and were always sad to leave them.

In 1971, Byron came to Beaumont as Rector of St. Stephens Episcopal Church, where he remained, much to his surprise for twenty years.  Byron loved his parishioners at St. Stephens and developed and organized many meaningful programs over the years that showed them the love of God and gave them a closer, deeper relationship with Jesus.

After leaving St. Stephens in 1991, Byron wasn’t ready to retire.  He ministered at St. Matthews Chaplaincy at Lamar before becoming Associate Rector at St. Mark’s Episcopal Church in downtown Beaumont.

Byron thoroughly enjoyed the people of St. Mark’s and especially loved working alongside Reverend Dick Elwood.  Without the obligations and pressures of running the Church, Byron was able to spend his entire time ministering to the people which was his greatest joy.  Although officially retiring from St. Mark’s at the end of 2018, he never really fully retired serving Trinity Episcopal in Jasper and performing weddings and funerals at people’s requests.  For the past twenty-five plus years, Byron has performed the Easter Sunrise Service at The Ethridge Farm in Kountze and really looks forward to it each year.

On July 8, 2016, Byron married Terry Owens who was widowed and had been waiting for him for twenty-nine years.  Byron and Terry had such wonderful times together acting like young kids in love.  Both loving the country life, they moved to their own small ranch in the Big Thicket north of Silsbee.  Byron and Terry planned a working retirement in the country caring for their five dogs, four cats and two horses.

Byron’s illness came up suddenly.  Two months before he died, he was happy and healthy riding his horse Lucky.  He died thirty-eight days after diagnosis and had always said , when his time comes, he wanted to go quickly.  It was certainly a whirlwind for his family and friends.  He would just want everyone to know how much he loves them and thank them for making it such “A Blessed Life” and he will see you in heaven.

Byron is preceded in death by his first wife, Ann; son, Tom; and his sister, Rita.

A Memorial Service for Reverend Crocker will be 11:00 a.m., Wednesday, January 8, 2020, at St. Mark’s Episcopal Church, 680 Calder Avenue, Beaumont. A reception will be held in the Payne Hall immediately following Reverend Crocker’s service. Cremation arrangements were handled through Broussard’s Crematorium, under the direction of Broussard’s, 2000 McFaddin Avenue, Beaumont. 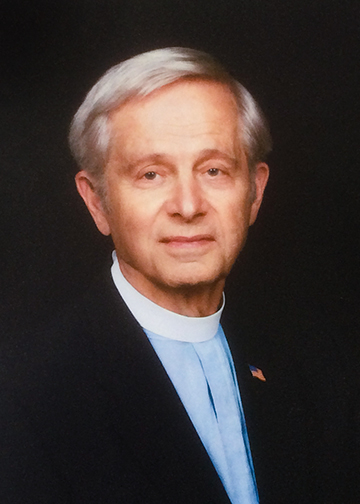 Fr. Crocker was a constant in my life. He raised me at St. Stephen’s and presented me at the Deb Ball after my dad passed away my junior year. He was always there to listen, to instruct, to mentor, to protect. He will be greatly missed.

He arrived the year I took Confirmation classes, and became the gentle voice of scriptures and prayers I grew up hearing. More than that he was there for weddings, last rights, and funerals. He was important to me. He taught me that you can run ANYWHERE in a hospital as long as you're running with a man in a collar. Now this gentle man is at rest. The World is a better place because he lived.

Rev. Crocker was the first to call on me to welcome me to Beaumont and St. Stephens Church. He is now received in God’s loving arms.

Fr. Crocker was loved and will be missed ! He was very cool too, coming to our house after a loved one's death on his motorcycle wearing his boots and aviator sunglasses, along with his collar. Rest in peace, dear one, and our sympathy to his family.

St. Stephen's was the church our family attended because of Fr. Crocker. My husband and I were married by him in 1979. He was a comfort during my dad's illness and death in 2000. He was such a gentle soul. Rest in peace.

He confirmed me into the Episcopal Church. He was a listening ear when i was a child and needed guidance. Hod bless you and prayers to Crocker family

We are so sorry to hear of Byrons death. He was a strong influence in my childrens life. We loved him for all the years we have known him and Ann.. He will be missed by so many people.

Fr. Crocker married Steve and I at St. Stephen’s. He was a best friend, mentor and the light of our lives. We and so many others will find it hard to live without him.

Great Crocker married Steve and I at St. Stephen’s. He was a best friend, mentor and the light of our lives.. We and many others will miss Byron’s light.

He was the reason I enjoyed going to St.Marks. I wanted him to officiate my wedding (whenever thatd be). His wife’s so nice, my family and I will miss him greatly!

So much spiritual strength came from Fr. Crocker. God rest his soul.

We were blessed to have known Ann & Byron for many years. Enjoyed traveling in a group which they were a part of. He was one of the kindest people I have ever known. I know the Holy Gates of Heaven swung wide when he approached. We shall all miss him greatly as long as we are here. We were very happy that he and Terry found such happiness together and sad that it could not have been longer. We pray for peace for her and his son and the rest of his wonderful family. Love and prayers, Nell Morris

The Easter Service will miss Fr. Crocker - we had many years of glorious services and so appreciative of his leading us! Such a fine man of God and good friend.