Trina Ruth Vallorani, mother and wife, passed into the arms of her beloved savior, Jesus Christ, December 29, 2022, at home, surrounded by family and friends following a lengthy illness. A farmer’s daughter from the hills of West Virginia and the wife of Gene Vallorani who together have made Beaumont, Texas, home for the last nearly 34 years. Trina cherished her children, grandchildren, and great-grandchildren.

Having been raised on a family farm she enjoyed gardening, growing flowers and vegetables, and also excelled as a homemaker who held her family together through love, skill, determination, and positive encouragement to meet life’s many challenges. She excelled at any and all undertakings with the motto, “Do it right or don’t do it at all.” Words cannot describe her beauty, skills, and determination to always pursue excellence in an undertaking.

She will be missed so much by her husband and family members who await the day when, once again, all will be reunited in Heaven.

She is preceded in death by her parents; daughter, Rhonda Leigh Vallorani; four sisters; and six brothers. 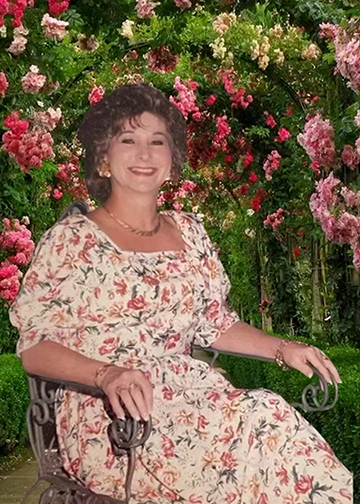 Gene,Sorry for the loss of your beautiful wife,our prayers are with you and your family.Take care of yourself,and know that we are here for you. Love your friends Darlene and Gary Hall

Trina,
A lady of pure love and compassion for her family. I remember going over to her house in Bridgeport WV, on Mesa Drive. She was always so kind and generous to me, and by the grace of God, 30 some years later me and her daughter Liddy found each other once again, and end up married. She was so surprised, but I know she was extremely happy that me and her daughter were now joined together for life, every time I hugged her it was just natural that she knew I was the one to care for her daughter and children, and I felt that special sincere love from her, as I did for her. Trina I was fortunate to have such a strong and caring person in my life. You will be so missed by your entire family, your spirit lit the room during every visit, especially Thanksgiving and Christmas celebrations. Well no more suffering, I know you will never leave our hearts, and I know you are with the rest of family in Heaven, and you have reunited with your dearest daughter Rhonda. Rest in Peace ❤️, Jeff

To the family of TRINA RUTH VALLORANI

It is with deep regret that we learnt of the passing of your dear loved one. Please accept our deepest condolence, you are in our thoughts and prayers.
“Blessed is the one who perseveres under trial because, having stood the test, that person will receive the crown of life that the Lord has promised to those who love him.”
James 1:12

My Grandma is the most loving person to ever exist and everyone who was lucky enough to know her can say the same. Grammy showed my love I would not know without her. She touched so many lives and left such an amazing legacy. Grammy is truly the matriarch of the family and without her none of us would be here. I was blessed to grow up living so close to my grandparents and building the bond that I have. Your love will always surround me and I will carry on that love for the rest of my life. Thank you for being the best grandma I could ever wish for. I love you and I miss you every second Grammy.

Loved my grandma with all my heart! I´ll always remember how every time I would look at her even when she was hurting, she would smile back. I love you so much!

I will miss my beautiful aunt. I loved every time I got to spend a min with her my uncle and my cousins. My time in Texas with them that trip with my mother who my aunt joins in heaven will always be special. I wish I could be there with you all celebrating here amazing life. I love you all so much . I’m absolutely heart broken.

Mrs. Vallorani had a smile that lit up the room. She was always so glad to see you and made sure you felt at home. I loved to hear her laugh and when she got that “glint in her eye”, you knew things were about to get good. She loved her family so dearly and it is an honor to be a part of that. Till we meet again. ❤️

My grandmother Trina also known as Grammy to my brother Tucker and I was the most beautiful, determined, and strongest woman I’ve ever met. She helped raise me to be the woman I am today along side of my parents Melissa and Kirk. She gave the best advice whether it was something you wanted to hear or not, she made ever sleepover over the years so memorable, and there never was a dull moment with her around. She was the epitome of beauty and grace. I can truly say that a walking angel as gained her wings. I will carry her passing with me until the day we meet again. I know she is experiencing an abundance of peace in heaven along side of my aunt Rhonda and all of our other family members and friends just behind the pearly gates. I love you with my whole heart Grammy, rest well.

My dear mother may you Rest In Peace. My mom raised me with Love and Strength. My mom taught me and helped me raise my own children. She was so strong and determined, and loved so completely. I will miss you everyday until we are reunited again.

Trina, or as I like to call her “Boppy”, was one of the best grandmothers you could ask for. She was resilient, strong, yet so nurturing and sweet natured. She loved her family so deeply, and that showed in everything she did. Words cannot express the depth of sadness her passing has left me. I was blessed to have my grandmother apart of my life for 23 years. She got to be a great grandmother to my daughter, and was overjoyed to hear I was expecting her first great grandson. Despite years of battling her illnesses, she was able to come to my wedding and dance the night away! And though she is no longer here with us, I find peace knowing that she is with Jesus in his kingdom of heaven surrounded by all her loved ones who have passed before her.

My mother Trina was an exceptional role model. She brought me into this world and prioritized my needs, dreams, joys and hardships. My mom was kind and strikingly beautiful! She was also very funny and we shared many laughs throughout the years together. My mom was also one of my best friends and I could always talk to her about anything and she would never judge me. Mom always prayed for her families happiness before her own. She was selfless to the end. I will always cherish this past Christmas week and the time I got to spend with her, and the blessing of being by her side when she met her Savior. I thank God and the universe for giving me an angel mom in human form. I love her with my heart, I love her with my soul and I will miss her endlessly! I have faith that we will be by each other side again in heaven. That is what I’ll hold onto through the years. I love you mom, truly!

Dear Lisa. So sorry to hear about you loss. What a beautiful heartfelt tribute you wrote. Hopefully you find comfort in all the lovely comments that your mother’s friends and relatives left for everyone to see. Much love 💘Laverne

Aunt Trina is such a beautiful person inside and out. I have the sweetest memories of her going all the way back to her house on Rt. 250 in Grafton. She was responsible for my parents meeting in 1971. I’m so thankful I got to spend some quality time with her at Lena and Jake’s weeding. She will be greatly missed, but I expect to see her again in heaven. I know she’s been happily reunited with family that she missed so much, especially cousin Rhonda. We love you and miss you, Aunt Trina!!

My heart aches. Trina is one of the sweetest and most beautiful souls I e we had the honor of knowing. She radiated beauty and grace. Her smile lit up the room. Her children and grandchildren are a testament to her legacy of faith, hope, love, and grace. Much love to the family.

My heart is broken. Trina was a wonderful Aunt. I was blessed having her in my life growing up. I have so many good memories. I wish I could be there with all of you. Aunt Trina you will be missed by all of us.
Love Stana, Billy, Walker, & Carson

Being the youngest in our family of twelve my beautiful sister Trina is now in heaven with our other ten siblings. I will miss her so much. Thank you Lisa for making it possible for me to spend time with Trina . Sorry I can’t be there for all of you but never doubt your always in my heart and prayers. 🙏🏻and 💕

Our hearts are broken. We have been honored and privileged to have shared in Trina’s life as the Nana and Pap Pap from the Desko side of the family. As she entered heaven Jesus was there to greet her with Rhonda peeking out behind his robes. It must of been a celebration beyond our imagination. Trina, I will miss you sharing the post as grandmother, but as long as I am here I promise to shower hugs and kisses for our family in your name. Till we meet again, Rest In Peace.
With love, George and Janet

Trina is my other mom. From day one she welcomed me into her life and home as her own. I am truly blessed to know Trina in my life and I’m a better person because of her. I already miss her dearly and know she’s now watching over me and Lisa and our family. I’m happy she is reunited with Rhonda in Heaven. Love ya “boppy”. Chris

Trina was a lovely person, in all ways. She was kind, thoughtful, and conscientious. A gracious person, who always put others before herself. Please accept our condolences and prayers. She was a living ambassador for Christ, being wise in living each day for the risen Saviour.