Virginia Austin, 93, of Beaumont, died Friday, October 1, 2021. She was born on March 19, 1928, in Haskell, Texas to Lelia Montgomery and James Cox. She was raised on a farm along with her 3 sisters, however her father passed away when she was just 9 years old. Shortly after, she moved to Fort Worth where she attended school and led the rhythm band, was a cheerleader, and played basketball and softball. She graduated high school and married her dear Jim at 19 in her mother’s living room on January 2, 1947. That love story lasted almost 68 years which was such a testament to the biblical marriage bond they both lived, treasuring, and honoring each other daily. When tragedy struck with the sudden loss of their son David, Jim carried her through the roughest time of her life, but she never lost her faith which she had leaned on through the hard times before. Always trusting God and maintaining a faithful relationship was a legacy she left for all of us.

Greg and Janiece’s marriage brought them back to a family of four. Definitely the very happiest days of her life were the births of each of her 5 grandchildren. Since Janiece’s parents were not living, she and Papa knew they had double duty, and they were the perfect example of how to grandparent. She and Papa attended almost every event in which the kids were involved and would babysit when Greg and Janiece were out of town. She had a special kind of love for each of the kids; never compared them, always glorying in each of their talents and comforting them when they struggled. She made sure that each of her grandchildren were spoiled with unending love and unwavering support. She even had play dates for many of their friends at her house, serving them Dr Pepper and ice cream on a tray with napkins! Several of the kids’ friends have sent their remembrances of the joyful sleepovers at Mimi and Papa’s. One of the most special gifts Mimi possessed was her ability to listen with love and the assurance that whatever you were telling her would be kept secret, forever. We always knew the kids could share any highs or lows with her and she would always have the right words. When the kids grew up and moved away from Beaumont, she stayed in close contact with them, sharing stories at least weekly.

Her toughest challenge was losing Jim, the love of her life. She had a hard period of adjustment but once again held on to her faith and rebounded for her family. We know that was so very hard for her and always told her how proud we were to have her here with us. When her own health began declining, she leaned on the support of her family, Angela, Glenda, and caretaker “angels” who were with her until the very end. When God called her home this last time, she was ready. Strong, sweet and courageous, as always, she slipped away from us to be reunited with her heavenly family. What a blessing she was to anyone that ever knew her.

She was preceded in death by her husband, Jim Austin; and son, David Austin.

A gathering of Mrs. Austin’s family and friends will begin at 10:00 a.m., Thursday, October 7, 2021, in the West Wing of Trinity United Methodist Church, 3430 Harrison Avenue, Beaumont. Her funeral service will follow at 11:00 a.m., at Trinity United Methodist Church, under the direction of Broussard’s, 2000 McFaddin Avenue, Beaumont, with interment will follow at Forest Lawn Memorial Park, Beaumont. 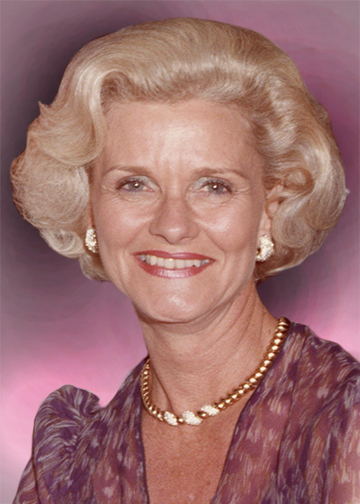 Virginia was a source of joy, encouragement and strength to me and so many others. Truly a treasure to us! May God give you comfort.

Mrs Austin was the sweetest Lady & always had a bed room in her & Jim home for me growing up.
Great memories Of a Loving Lady.
Love & Prayers to Greg & Janiece & family

A beautiful tribute to such a lovely lady. I always enjoyed our visits at Earlene’s getting our nails done. She so enjoyed reminiscing about Greg’s high school days and with all his buddies. She remembered such fun times they had together. Mrs. Austin was blessed with a beautiful family and enjoyed the life they shared together.

Virginia and Jim Austin were the sweetest, most devoted couple one can imagine. She was elegant, kind and caring to all. It was a privilege to know her and I enjoyed getting to know her lovely grand daughter, Olivia, who is a beautiful reflection of Virginia. Deepest sympathy to her entire family.

What a beautiful and elegant lady she was… and this photo is exactly how I remember her as a neighbor across the street growing up with Greg.
My mother always commented how Mrs. Austin ran so quickly out the door with a stack of plush white towels when we had numerous wrecks on Delaware at 11th street during the day.
I always admired her. Her beauty, her smile and her sweet demeanor.
Good bless you, Greg, and all those who loved her.

Sending love and sympathy from the McDills – Linda, Dana and Dan.

A beautiful lady inside and out, will be truly missed…
Mark,Katy and Rosabelle