William Edward “Bill” Grantham, 95, of Beaumont, died Monday, May 9, 2022, at Calder Woods, Beaumont. He was born in Corpus Christi on July 14, 1926. He was the son of Oscar and Mamie Grantham. Bill graduated from St. Anthony High School in 1944 and attended Lamar University before joining the United States Army Air Corps.

He married his high school sweetheart, Johnnie Conley. He and his wife, Johnnie, started their company Sanitary Supply Co, Inc., in 1966, after being Vice-President with Sanitary Chemical, Inc. for many years. Bill had been a manager for Sanitary Chemical Lab, which was founded in 1937. When the owner sold out due to poor health, Grantham bought the janitorial products line and opened Sanitary Supply on 6790 College in Beaumont. Bill and his son, Larry Grantham, now ran this successful business together. Their customer base has grown considerably, and their territory has expanded over the years. Today, Sanitary Supply serves about a hundred-mile radius including Beaumont, Southeast Texas, Southwest Louisiana, and Baytown. They were the first company of their type in this area. They sell to many of the leading industries including schools, government entities, industrial plants, and wholesale and retail customers. Bill would say, “Our business is founded on service” and that “I’m just happy to be in this area to serve all our customers”.

He was a devoted husband and father and took great interest and pride in his son and daughter, three grandchildren, and seven great-grandchildren. He and his wife began traveling in their many motorhomes they had purchased since 1975. They had traveled to every state in the U.S. and Canada while playing golf along the way. Bill loved playing golf with his friends at the Beaumont Country Club and having lunch with his two lunch bunch buddies. He had many hobbies including traveling, golf, fishing, gardening, and woodwork. Bill was a Deacon at Calder Baptist Church and a member of mixed doubles Sunday School Class. For many years, he was a member of the West Beaumont Rotary Club of Beaumont where he served as President and a Paul Harris Fellow. Bill was President of the Business Professional Men’s Club, President of Sales and Marketing Executive Club, and Chairman of Schlesinger Nursing Home. Bill served on the board of the Symphony of Southeast Texas and many other boards.

He is preceded in death by his parents and sisters, Betty Pearson, June Braquet, and Pat Acker. 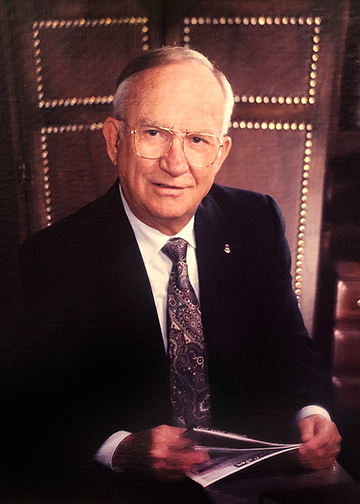 Please know our thoughts, prayers and condolences are with the Grantham family.

Bill was a great person and always fun, he will be missed by all that had the opportunity to call him a friend.

My prayers are with you all. He was a great gentleman and a dear friend. He always wanted to know how I was doing and if I needed anything to call on him. I know this is a tremendous loss.

My heart breaks for Johnnie and her dear family.
May his memory be eternal.
My love,
Katherine Cokinos

I worked at Sanitary Supply with the Grantham Family in the late 70s. Bill was kind and a great employer. I’m so happy that he lived a long life and he’s at his forever home. My thoughts and prayers for Johnnie, Larry, and Susan and all the family as they learn to live without him. Judy

My prayers are with the family. He was a special man.

Jonnie we love you and will miss Walking into church with Bill. Bill was there when we need a shoulder when we lost Brent our prayers are with you.

Johnnie, it was always a pleasure to see you and Bill when we were in the couples class with you at Calder Baptist. Bill was a Christian man of integrity and I was fortunate enough to serve on two committees with him. I got to see his integrity and faith. We are sending our prayers and love to you. Love Bob, Elizabeth & Paige

Mrs. Grantham, Larry and Cookie please know that you have my deepest sympathy. I have fond memories of all you. Candy Torrence Hollis

What a wonderful man. He will be missed by all who knew him.

May your hearts soon be filled with wonderful memories of joyful times together as you celebrate a life well lived. Mr. Bill was a wonderful man. He always had kind words and treated me with respect. He will truly be missed by many!

To his family, friends and this community this is indeed a great loss.
I have worked with Bill for 35 years and credit Bill and the Grantham Family with my success as well as the success of many others, past and present.
Bill may be gone but his legacy continues in the people he touched, the charities he supported and the business he created.
Farewell Boss.

I worked with Bill Grantham in the 1960s. He was a fine man and an asset to the Beaumont Community. My sympathy is extended to his family.