Betty Lee Broussard Heine died peacefully on December 30, 2020, after a short battle with COVID. She maintained her captivating smile and positive spirit until the very end. She was born January 27, 1923, in Beaumont, Texas, and married Joseph Heine in 1946 who brought the southern belle to Yankee-land, (after promising that he would return her to Texas each Christmas!) She leaves behind her legacy of seven children: Barbara (David) Hagerman, Joanne (Steve-deceased) Hollenbeck, Susie (Guido-deceased) Borgnini, Carol (Noaman) Botros, Connie (Jim) Lund, Greg (Kathy) Heine, and Marie “Sam” (Ted) Shanks. She is survived by one brother James (Barbara) Broussard from Beaumont, Texas. Her grandchildren knew her as GG (Glamorous Grandmother); she has 15 grandchildren and 13 great grandchildren and many nieces and nephews.   Her husband preceded her in death in 1991. She was also preceded in death by her parents, Dale and Arthur Lee Broussard, and two brothers Alex Broussard and Dale Broussard, Jr., who died at Iwo Jima.

Betty graduated as valedictorian of her class in 1941 from St Anthony High School, where she played guard on the girls’ basketball team. After she graduated from Lamar College, she worked as a bank teller until she moved to Indiana. She was a go-getter and immersed herself in her children and children’s activities. Her positive spirit surrounded her in everything she did. She was Beta Sigma Phi Girl of the Year in 1954. She was instrumental in organizing the Mothers’ Club at St. Margaret Mary grade school, was a Brownie and Girl Scout Troop leader and a Cub Scout Den mother.When Schulte High School needed help with student transportation, she organized a bus service to meet the need. After marrying off four daughters, she became an astute bridal planner, so took a small business class and opened up her own business, The Bridal Cottage, selling bridal dresses and formal wear. She arranged style shows and presentations, and worked in the business until age 70.

Betty loved people, and she always had a story to tell and a smile to share. She was “news central”, and her kids accused her of having special antennae because she always knew what was going on, and remembered EVERYTHING. She was called the “Queen Bee” because she was always in the center of activity. She attended every ISU Homecoming parade for 50 years. She played bridge well into her 90’s, and was a master at jigsaw puzzles and crossword puzzles.  She loved the Wheel of Fortune and was an ace at pre-computer video games (her favorite was Burger Time.) She loved to travel, and her travels took her across the globe, including trips through the Panama Canal, cruises around Europe, and an annual spring trip to Florida for over 15 years with her cousins.

She continued her love for basketball as an avid fan—of ISU and the Indiana Pacers.  She was also a great shopper (and the genes have been transferred to her kids). She took the bus with friends to Indy to shop at Hoosier Bargain Days, ate at Ayres for lunch with pecan balls for dessert. She also loved to shop by mail—it was fun to order it and then exciting to receive it. She would buy all year for Christmas. She never lost the taste for her southern food: fried oysters, grits, gumbo, pecan pralines, and butter pecan ice cream.

Betty was proud of her family and was especially honored when the family was presented with the Legacy Award from Indiana State University. She always said she was so “fortunate” to have such a wonderful family, and we would often remind her that SHE was the matriarch who sculpted it all.

She was a current member of St. Benedict Church, and a former long-time member of St. Margaret Mary Church. She was a past-president of the Lioness Club, a member of Red Hat Society and The Sycamore Club.

A heartfelt thanks to Westminster Village and to her special caregivers who gave her incredible care and always kept her happy.

The immediate family will gather for a mass, and a Celebration of Life is planned for a later time–when we can give each other hugs. 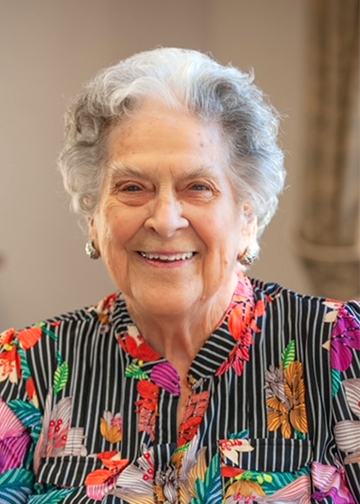 Such a fabulous woman with a wonderful family. So very sorry for your loss. â™¥ï¸

I can't imagine my childhood with the Heine's and Mrs. Heine in particular. She made me feel special and at home every time I hung out at "Sam's house". Her food was incredible! She was a fellow Catholic with a big family like ours. She was a cheerleader for her family and her community. I remember Tilley, the Bassett Hound guarding the house! I remember Mrs. Heine allowing us to eat ice cream in the middle of the day! I just remember lots of fun and lots of love. Mrs. Heine altered my Mother's wedding dress so that I could wear it at my wedding. I remember her always asking about my Dad who was also at Westminster. What a great role model for us all. Rest in peace, Mrs. Heine. May the entire Heine family feel the love of the entire Terre Haute community.

A great lady that raised and supported a wonderful family that will continue her legacy, love, and spirit of life for years to come. She will be missed but always remembered.

Although Mom lived in Indiana for over seventy years, she was so proud of her Texas roots and of her family heritage. Thank you, Broussards, for sharing this with her hometown.

I had the privilege to know and meet Betty only for a brief moment, but one that I will always remember. Her smile, her wisdom, her grace was written all over her face.. I immediately was captivated by her story telling, and listened to them with great joy of each of the life experiences she had, and the lessons they brought.. She was truly a Great Lady, and my lasting memory of her is indeed a treasure ..

The last time I Betty was at her son-in-.law's funeral August 2019. Even though we seldom saw each other she always greeted me with a big welcome smile and an interest in what was happening in my life.. I remember visiting their home while in college which was always full of activity. In February 1969 I brought my future husband to that house for my Tri Delta sister's to meet on that same evening I met Barb's future husband, David. We have remained good friends for 50 years. That home was a place of love where people could come and be comfortable...She was a role model for all women. .

Betty's Bridal Cottage and her home were the places of such good memories! From wild party stories, Greg's Mustang rides, morning-after-prom brunch, Joe's breadsticks, the bonanza cabinet above the stove, the attic filled with treasures to explore. quiet moments on the side porch, and the wonderful neighbors. And working at the Bridal Cottage gave me a chance to see powerful feminine as business leader and I learned so many good things working there in the mid 1980's. Plus it helped finance my graduate school. Being in the spring bridal and formal shows was so much excitement and fun. I love you Sam, and all the Terre Haute Heine clan. Betty always has a place in my heart.

Aunt Betty was always an upbeat and energetic lady in everything she engaged in. With family, business, friends and faith. What a sister she was to the boys!! We all loved her and uncle Joe's comedic look at life. They went together like peas and carrots, and I can still hear her voice and laughter. She was the one I knew would live to see 100 years, and I know she would have if not for this virus. God speed Heine family, you are blessed to have her. Praying for our family.

I am just so sorry to hear about this!! My thoughts and prayers are with everyone!!

What a very special tribute to a lovely lady! I know all of you will miss your sweet mother so much. Hugs from your Texas cousins. We hope we can all celebrate your mother's life soon!

She always had a smile on her face and was so sweet . I will always remember the pink tea party and the story behind it as many of you will have memories too share. May Gods bless you all .

Barbara and I are very sorry to hear about Betty. Betty was an outstanding lady. Our families have been close friends, classmates and many organizations. May Her Soul, and all the souls of the faithful departed, REST_IN_PEACE.

Mom Heine was our "away from home" mom when I attended ISU. She welcomed her daughter Joanne"s sorority sisters with such genuine kindness and included them as part of her family. Her legacy is a role model for us all.