Carl Wade Lowe, 56, of Beaumont, died Saturday, October 29, 2022, at Baptist Hospitals of Southeast Texas-Beaumont. He was born on July 2, 1966, to Mary Theresa Borque and James Wesley Lowe, in Groves.

“Gobby was a free spirit. His creative and zestful nature were infectious. Gobby made friends easily and seemed to never meet a stranger. We shared many moments of laughter and tears that are cherished memories of our lives as siblings. Gobby’s best life was spent on the water with a fishing pole in his hand. He loved being outdoors and was an avid fisherman.

He wasn’t what anyone would call “PC”. If you knew him, you know. He was straight forward and loud. Some would say he was mean spirited.

His greatest quality was his loyalty. If he was on your side, it was 150% with everything he had. And if he didn’t have it to give, he would find a way to get it and give it to you.

He lived each moment in that moment. He lived one day at a time and played by his own rules. He made no excuses for who he was. It was his life, and he was going to live it his way. With or without you. and that is exactly what he did, Lived His Live.

“I give you this, one thought to keep. I am going with you still, I do not sleep. I am a thousand winds that blow. I am the diamonds glints on snow. I am the sunlight on the ripened grain. I am the gentle autumn rain. When you awaken in the mornings hush, I am the swift uplifting rush…of quiet birds in circles flight I am soft stars that shine at night. Do not think of me as gone-I am with you still at each new dawn.” -Native American Prayer

He will be missed.

The family asks in lieu of flowers, donations be made in his name to the Heroes on the Water Coastal Bend Chapter, 101-C North Greenville Avenue, #55 Allen, Texas 75002. 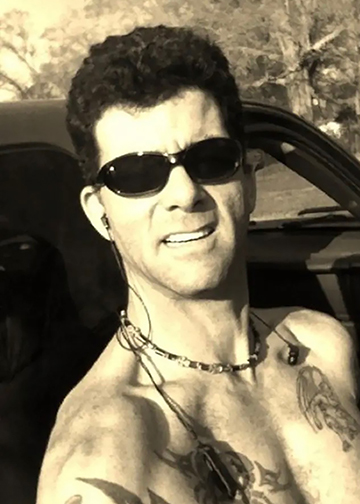 I’m so sorry for the loss of Gobby. I’m glad I had the opportunity to meet him and get to know him a bit. Love and Blessings to you all.

To the Lowe family, I am so sorry for the loss of Gobby. What a handsome man he had become. My prayers are with all of you.